“I insist upon my rooms being beautiful!” declares Willy Wonka in Roald Dahl’s 1964 children’s classic Charlie and the Chocolate Factory. “I can’t abide ugliness in factories!” It’s a feeling that was evidently shared by the charitable Lindt Chocolate Competence Foundation when, in 2014, they organized an architectural competition for the Lindt Home of Chocolate (LHC) at Lindt & Sprüngli’s historic manufacturing site on the shores of Lake Zürich in Kilchberg. Combining a public chocolate “museum”—a 16,000-square-foot multimedia display accompanied by the obligatory shop, café, and auditorium—with a small, publicly visible production facility, office space for both the foundation and Lindt, and a research lab for the development of new techniques in chocolate production, the 215,000-square-foot facility was designed by Basel-based architects Christ & Gantenbein (C&G). Realized under a design-build contract by Eiffage Suisse, with museum displays by Atelier Brückner, the $109 million LHC does not, in the words of C&G founding partner Emanuel Christ, seek “common standards” of beauty, instead taking its cues from the aesthetic tropes of its 20th-century industrial context. 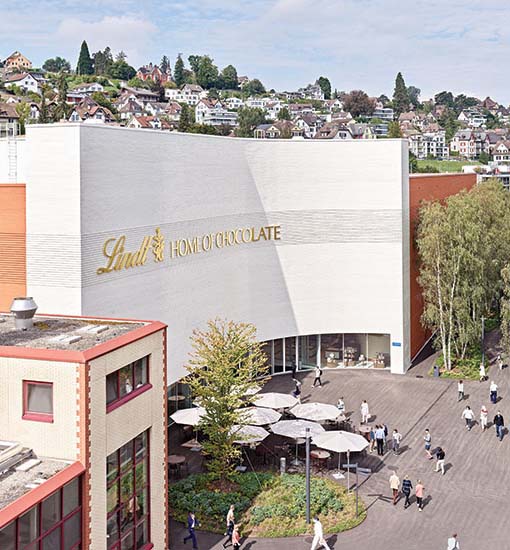 One corner has been scooped out to form a modest entrance plaza where a curved wall in glazed white brick rises higher than the rust-red brick walls. A striated frieze binds the main and subordinate facades. Photo © Mark Niedermann, click to enlarge.

Located at one end of the factory, on the site of the employee parking lot (which has now gone underground), the LHC is sandwiched between railroad tracks at the rear and a public thoroughfare out front. Filling the entirety of the plot, apart from one corner where a chunk has been scooped out to form a modest entrance plaza, it takes the form of a largely blank box clad primarily in contextual rust-red brick—indeed, you’d be forgiven for assuming it was a banal warehouse, were it not for the giant curved entrance wall which, rising higher than the rest, sports brilliant white-glazed bricks emblazoned with the LHC logo in large golden letters. As you approach, however, subtleties in detailing began to tell a more nuanced story—the pointing and external sun blinds colored to match the red bricks, for example, or the striated frieze that binds the main and subordinate facades together and integrates bands of windows on the lateral and rear elevations. 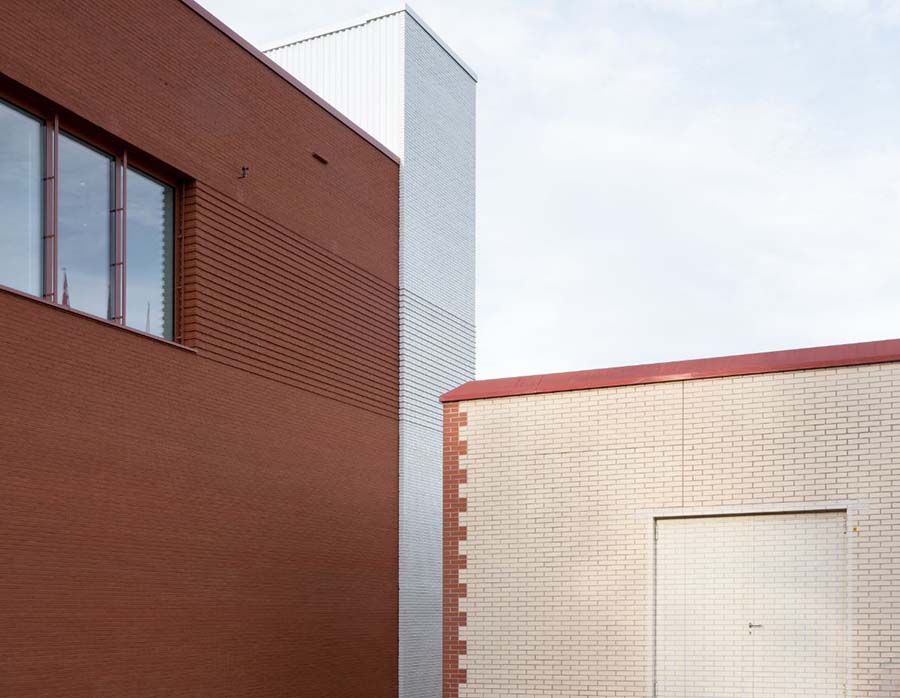 Public entry is gained via the glazed base of the entrance wall, depositing you in front of the welcome desk. What you don’t immediately realize, until you turn your head to the right, is that you have arrived in a cavernous 210-foot-long, 49-foot-high top-lit concrete atrium at whose center stands the world’s largest chocolate fountain (another Atelier Brückner confection), whose 1,000 liters of brown gloopiness fill the space with evocative aromas. Viewed from the entrance, a concrete footbridge whizzes above your head, framing the fountain and, beyond it, a bravura concrete spiral stair that takes you up to the first level, where you enter the museum; after negotiating its suite of black-cube rooms, you come back out at the footbridge you previously saw from below, which you cross to arrive at the other side of the atrium, continuing your promenade architecturale alongside the production line (protected behind glass), and then around and back down to the ground floor. Here the route strongly encourages you to exit through the shop and, if you’re in need of refreshment, to try out the café next to the entrance. Or you can climb to the building’s third and final level, which contains offices at the rear, meeting rooms at the sides, and, on the street side, the Chocolateria, a chocolate-making atelier that offers lessons or can be hired for functions. As for the research lab, it is discreetly hidden at the back, behind the production line. 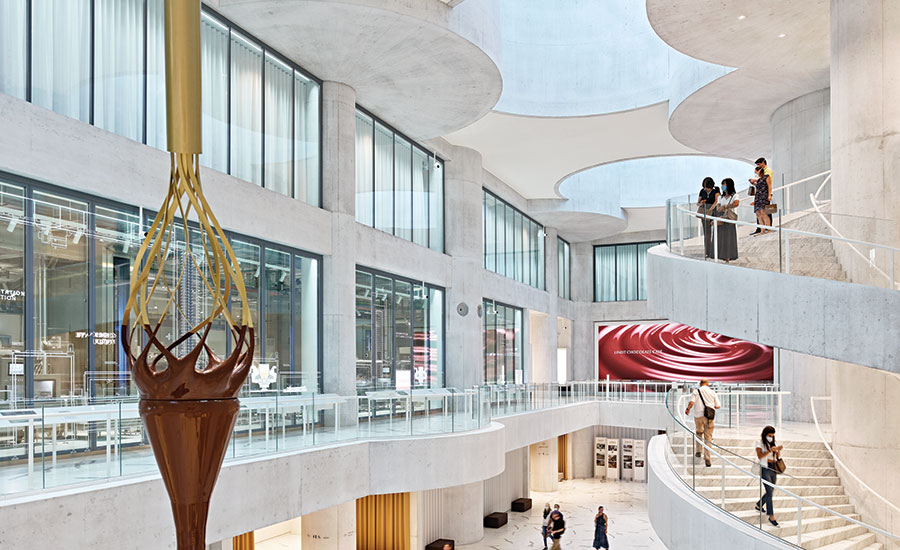 Disc-shaped skylights, a concrete footbridge, and spiraling stairs are architectural highlights of the 210-foot-long atrium, the center of which contains the world’s largest chocolate fountain. Photo © Mark Niedermann

“In terms of planning and coordination, this is one of the most complex projects we’ve ever done,” says Christ about the elegant simplicity they’ve managed to pull off at the LHC. “You have to deal with all the regulations relating to public buildings, but at the same time the complex requirements that come with food production, plus offices, different people flows, etcetera.” What’s more, after what they describe as a “very tough” 18-month competition process, C&G had to fight just as hard “to defend and guarantee architectural quality” under a design-build contract for a project that, they say, involved “a real sense of economy.” But guarantee quality they did, as becomes clear when, on closer inspection, this seemingly “simple” building turns out to be rather rich and subtle, full of conscious and subconscious references to the history of architecture. 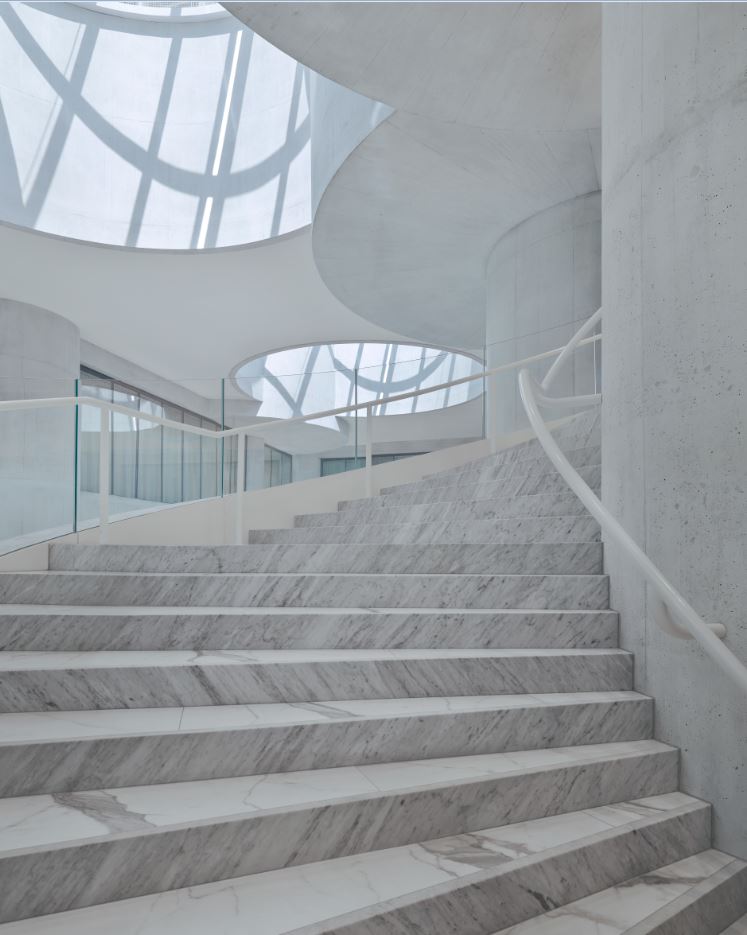 “We are practitioners, but we have the ambition and, as we feel it, the obligation to reflect on what we’re doing in terms of a theoretical discourse,” says Christ. Before we’re even through the door, he’s already mentioned Venturi (the “decorated shed”) and Palladio (the Redentore’s workaday brick rear fronted with a white-marble entrance screen) in reference to the LHC’s exterior, while inside he invokes Kahn and Parisian department stores in relation to the highly expressive concrete mushroom columns of different diameters, which not only hold up the atrium glazing but contain elevators, stairways, and HVAC ducts. Before you know it, you’re playing the game too—surely the atrium is also a bit Johnson Wax? And isn’t that classicizing frieze rather AEG turbine factory, not to mention a quote from C&G’s own Kunstmuseum Basel?—and sharing Christ’s enthusiasm for the “cathedrals of industry” that inspired the LHC’s vocabulary. Moreover, since you’re no chocolate junkie and find the whole experience disappointingly slick and commercial, you’re more than relieved by a certain Swiss structural sobriety, and appreciative of an architectural gesture that has proved strong enough to resist every kitsch marketing ploy thrown its way. 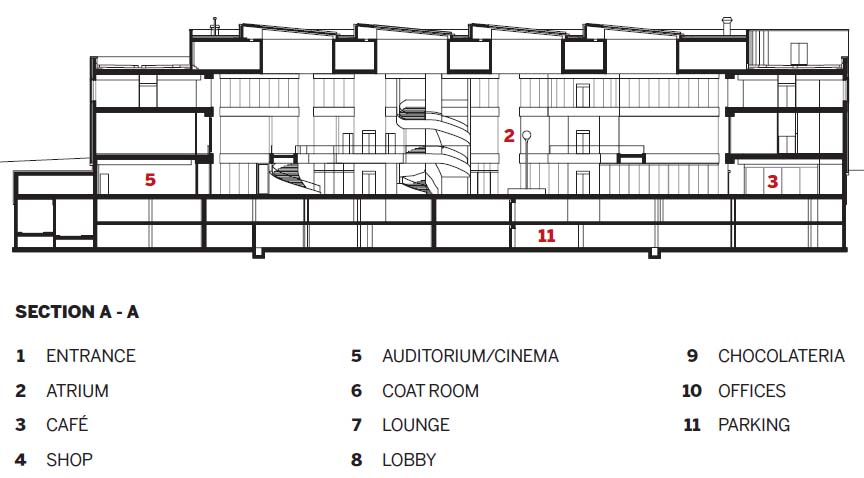 Extension of the Swiss National Museum