“Research institutes today employ a strategy of seduction,” says Franck Vialet, joint principal, with Bettina Ballus, of Paris-based architects VIB. “ ‘Come to us,’ they say to scientists from all over the world: ‘you’ll find fantastic working conditions in an amazing building!’ Architecture is expected to contribute to the institute’s international prestige.” Such was the challenge facing VIB when designing the $18 million central-Paris home of the Institut de l’audition (Institute of Hearing, or IdA), a new cross-disciplinary research center for fundamental hearing research in neuroscience, genetics, biophysics, etc., as well as a forum where both professionals and patient groups can meet. That the IdA is located near the Bastille, a stone’s throw from the Institut de la vision (Institute of Sight), was no accident but rather the result of City Hall’s policy of encouraging and supporting medical research in Paris. Indeed, it is the City that owns the IdA’s premises and that, through its majority-owned property company RIVP, piloted conversion of the existing building to its new use. 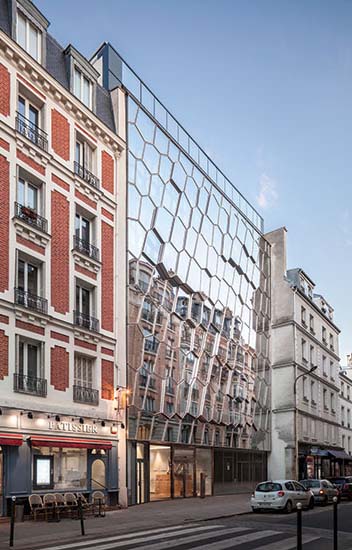 A crystalline stainless-steel and glass street-facing facade riffs on the pattern of sensory hearing cells and reflects its more straitlaced neighbors (above and top). Photo © Cyrille Lallement, click to enlarge.

Initially constructed as a furniture workshop in 1906, the building is now enjoying its third life, after becoming a law school in the 1950s. When VIB first visited it, during the competition phase, in late 2013, they found a nondescript six-story edifice with labyrinthine circulation routes and dreary 1950s curtain walls; room for maneuver was limited, since the building is hemmed in on three sides on a long, narrow plot with little street frontage. “The IdA hadn’t quite crystalized at that point,” recalls Vialet, “and the competition brief asked us to evaluate the building’s potential. How could you give it an identity on the street and make it suitable for research labs?” Fine-tuning the particulars came later, hand in hand with the client once the IdA had been properly constituted, but the initial ideas have made it all the way through to the end: a strong facade concept, inspired by the form of human cell tissue, that gives the institute street presence and the desired identity (and behind which are offices, administrative spaces, and staff rooms); a full-height atrium that forms part of the ground-floor publicly accessible spaces (which include meeting and conference rooms and a 163-seat auditorium); and a “garden” lightwell toward the rear of the plot around which the labs are grouped, accessed by a new easier-to-navigate circulation route. 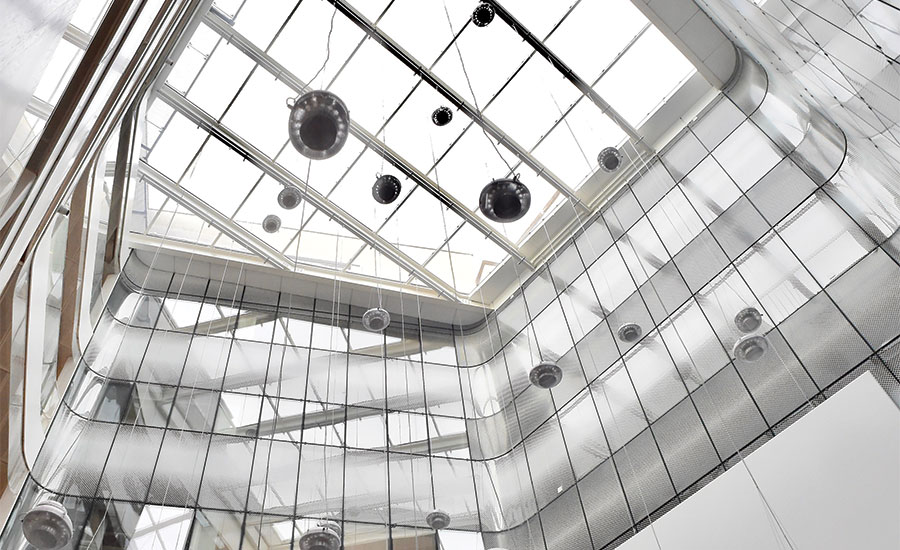 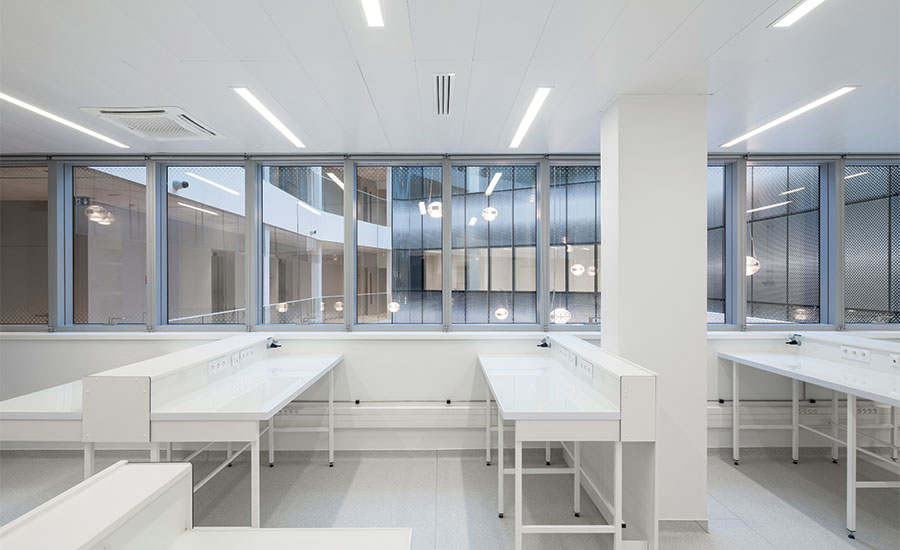 A full-height atrium (1) is part of the ground-floor publicly accessible areas and carries light deep into the long and narrow inward-looking building, its labs (2), and other spaces. Photos © Franck Castel (1); Cyrille Lallement (2)

Once program specifics began to be worked out—130 researchers, high- and low-pressure labs with airlocks—it soon became clear there would be a space problem: where could they put the voluminous technical plant required by this kind of facility? Since the City refused to let it go onto the roof, the only option was to excavate and create a new basement. As a result, construction was rather a heroic affair that took three years to complete: after stripping the structure back to its frame (part steel, part concrete) and strengthening it where necessary, a new concrete basement was inserted; only then could retrofitting begin. 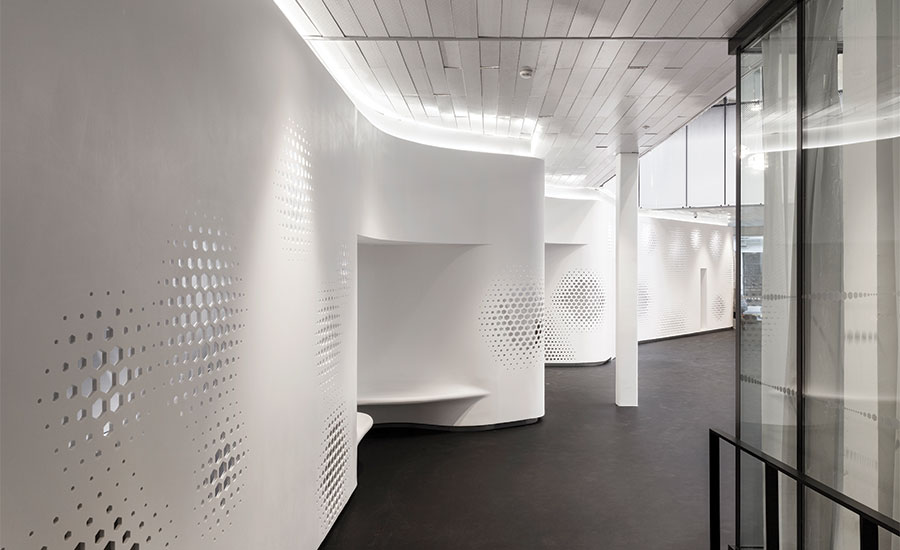 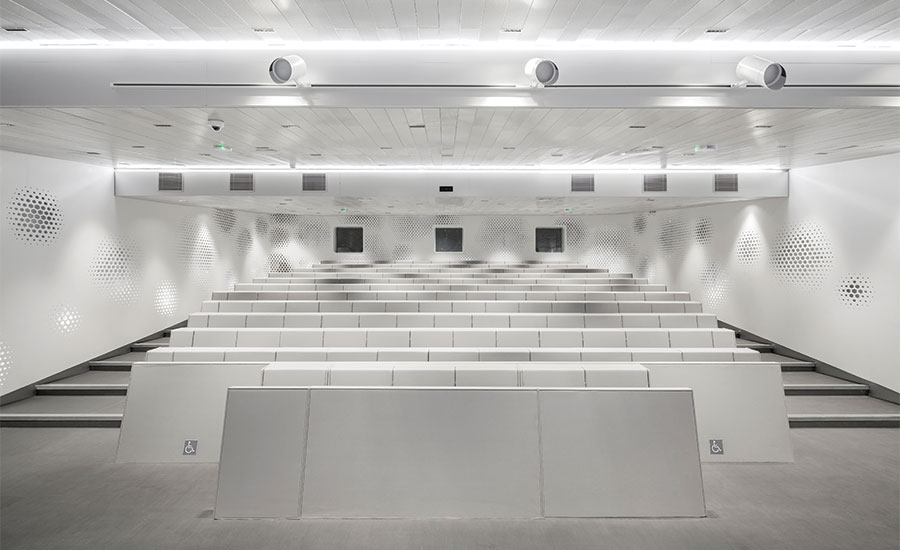 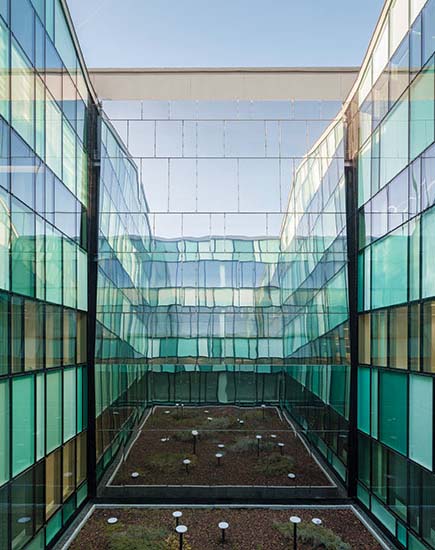 Interiors flow seamlessly alongside sinuous white solid-surface walls with acoustic perforations, as in circulation areas (3) and a 163-seat auditorium (4). The back lightwell (5) is clad in reflective deep green glass, and has a planted floor. Photos © Cyrille Lallement

“The whole challenge of the project was to get light down inside,” says Vialet. “It’s essential for such a dense, introverted building.” Just beyond the glass-fronted threshold, space flows seamlessly into the atrium, along sinuous white solid-surface wall facings that catch the light in their curves and cellular acoustic perforations. The atrium itself is all glass, alternately transparent and pixilated in white (to hide the masonry behind), which contributes to the gentle milkiness of the generous light that floods down even on a dark winter’s day. The interior leitmotif of laboratory white is contrasted with the green facades of the rear lightwell, whose floor (part of the auditorium roof) was originally planned to be luxuriantly planted (in the end, it only got grass) to provide a cloistered oasis of calm. “The cheaper the glass, the greener it is,” explains Vialet, which is how VIB inexpensively achieved the lightwell coloring, while a giant mirror, tilted to reflect the sky, hides the neighboring party wall and ensures yet greater luminosity. But the pièce de résistance is incontestably the splendid street frontage, where new walls and windows are hidden behind a second facade in glass and stainless steel to thrilling effect. A riff on the pattern of sensory hearing cells, this protective, reflective layer, which helps mitigate the proximity of neighbors just opposite, has been fractured into crystalline facets in three dimensions, multiplying the city and the sky all around and exclaiming to passersby, “I am a place of interest!” 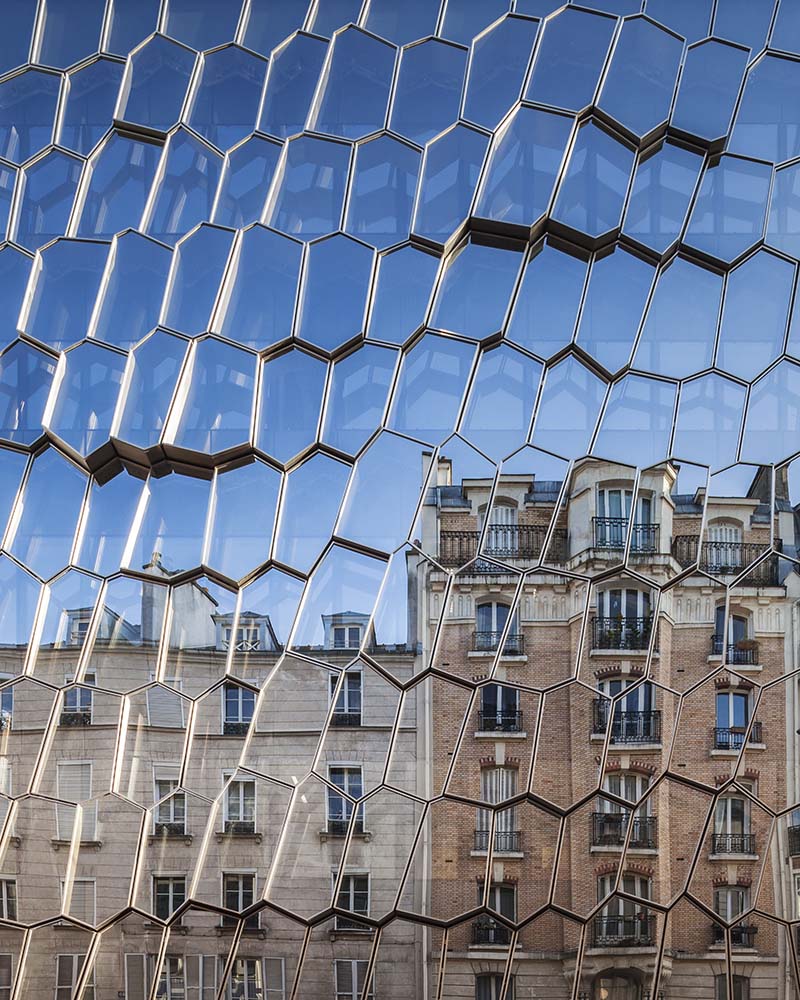 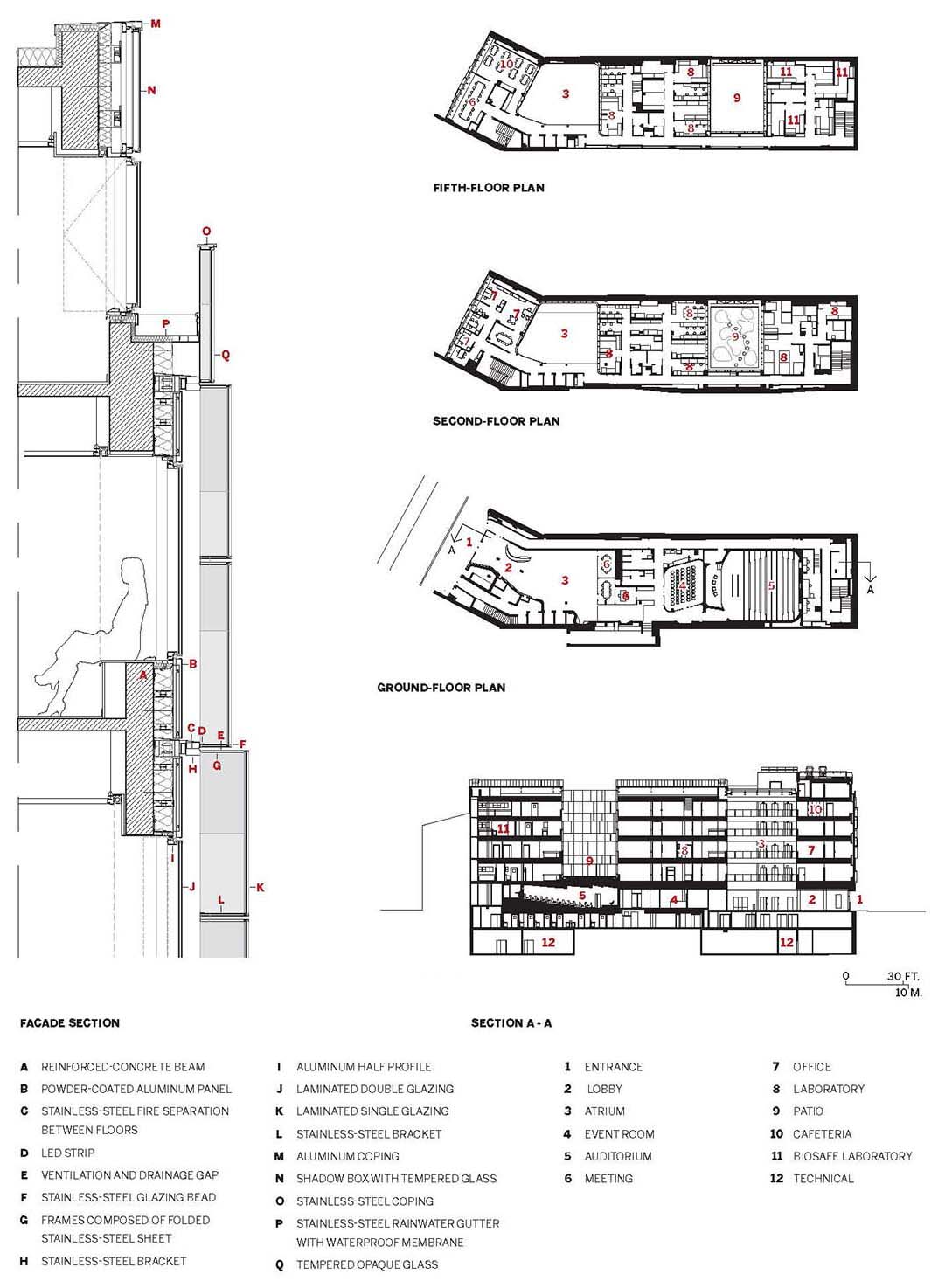 Client:
RIVP (City of Paris) with Audition Foundation, researchers, and the Pasteur Institute