Arcing along the banks of the Dojima-gawa River near the center of Osaka, the Nakanoshima Children’s Book Forest engages with the city on multiple levels. It connects to an adjacent park and acknowledges the legacy of the nearby Osaka City Central Public Hall, which was built in 1918 with a large donation from a wealthy native son. Like that philanthropist, Tadao Ando grew up in Osaka and wanted to give back to the city. So he proposed creating a children’s library and paying for the construction himself. After talks with municipal authorities, the city agreed to provide the land next to Nakanoshima Park, which occupies the eastern tip of a crescent-shaped island in the river. “This project began with the idea of ‘growth,’ ” says Ando. “I have always believed that books are nutrition for the developing mind,” he adds.

Asked about the need for libraries in the Internet age, Ando replied, “There is a limit to learning with a screen. Of course, information technology is incredibly efficient and indispensable, but [physical] books hold history and memory not found in the digital data of handheld devices.” He also believes there is still a need for places where people can gather and learn together. 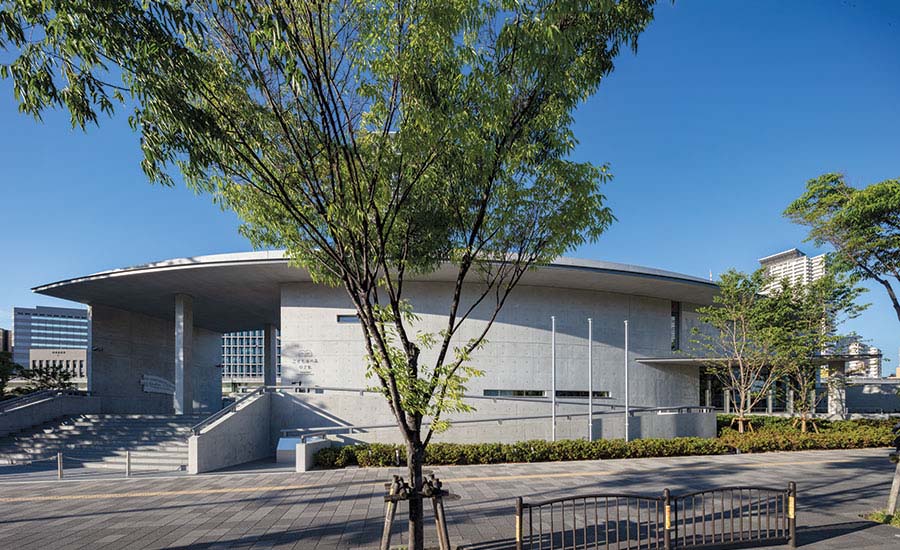 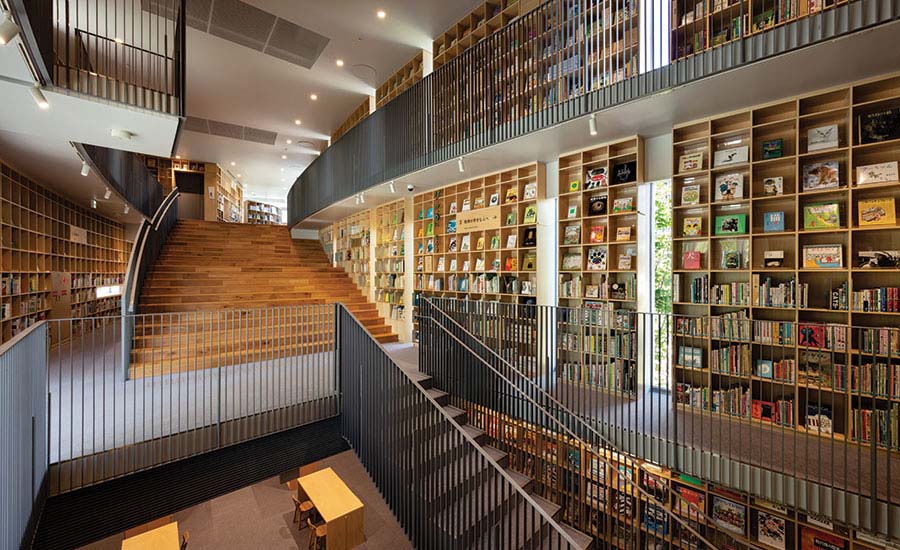 Visitors enter the building from Nakanoshima Park (1), then find themselves in a threestory atrium wrapped in floor-toceiling bookshelves (2). Photos © Shigeo Ogawa Studio, click to enlarge..

The concept of tension—forces pulling in opposite directions—has long played a critical role in Ando’s work. Accordingly, his architecture often strikes a balance between solid and void, building and landscape, passion and reason. For the Children’s Book Forest, he drew a taut curve opposing the bend of the river, as a response to the site. “I imagined the form to be the arch of a bow moments before an arrow is launched,” says Ando.

A simple reinforced-concrete structure, the 8,775-square-foot Book Forest combines a mostly solid eastern half with a large covered porch on the west. This duality accommodates the twin functions of the library—housing books that need to be protected from too much daylight and connecting visitors to the nearby park and river. Ando says he envisioned the open western portion of the building as a modern engawa, a veranda-like element in traditional Japanese architecture that is usually raised above the ground. Due to the soft soil of the waterfront site, Ando’s team used a “columnar improvement method” to reinforce the building’s concrete foundation. 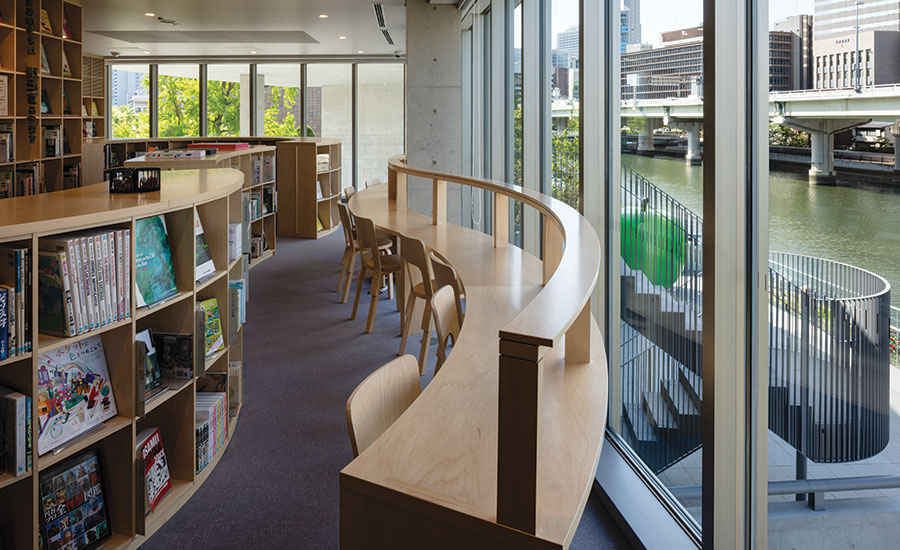 Ando used linden wood for the shelves, as well as for the desks and chairs throughout the library. Photo © Shigeo Ogawa Studio

While the library reaches out to its surroundings with a terrace on the north and a grand stair on the south, it turns inward once you enter. A three-story atrium wrapped with floor-to-ceiling linden-wood bookshelves and animated by a central stair and crisscrossing bridges serves as the focus of the interior spaces. Desks and chairs are made from linden too, while a broad set of curving stairs leading from the second floor to the third features white oak coated with clear urethane. Railings for all stairs and balconies are steel painted dark gray.

Ando has used full-height bookshelves in previous projects, such as the Shiba Ryotaro Library in Osaka (2001) and the Picture Book Museum in Iwaki City (2004), and likes them because they “make ideas and knowledge a tangible material within the building.” For his latest project, such shelves give children the sense of moving through a forest of books. Vertical slots of clear glass run up through the atrium, alternating with sections of books and underscoring the allusion to a wooded place where daylight arrives in streaks. Ando says his goal was to create “a space that would remain in children’s memories and encourage them to keep learning throughout their lives.” 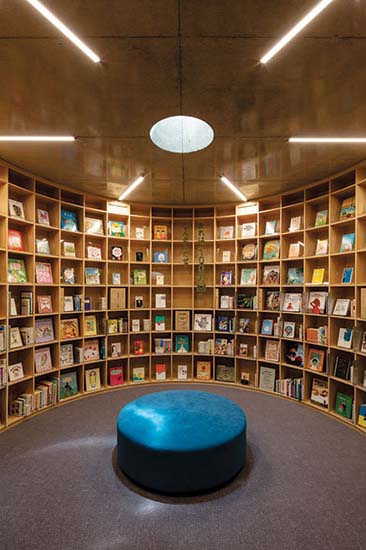 A small reading room on the first floor surrounds children with books, creating an intimate oasis for storytelling and other activities. Photo © Shigeo Ogawa Studio

Other than an office and a workshop room on the first floor, the library is essentially one flowing space where children and their parents can browse and read books. Although visitors can’t take titles home, they can spend time with them anywhere in the building and even in the park. The only indoor spots with separate identities are a pair of cylindrical volumes accessed on the first floor—a cozy reading room wrapped in books and a 39-foot-high concrete silo on whose bare interior walls can be projected videos conceived by BACH, a consulting firm dealing with the creation and presentation of books, and produced by Rhizomatiks, a group that offers services in architecture, design, and research. Ando pulled these two cylinders away from the main body of the library to give them special status, while at the same time ratcheting up the tension in both plan and section in a composition already bending as if to launch a projectile.

In addition to paying for the construction of the library, Ando asked friends and colleagues to donate books from their own childhoods and help with operating costs. For the book displays, BACH organized the titles into 12 themes, such as “Play With Nature,” “For Those Who Like Animals,” and “Beautiful Things,” rather than by genre or age group. Books on the upper shelves, which are too high to reach, face outward, but the same titles are accessible on the shelves below.

The Children’s Book Forest was supposed to open in March 2020, but the Covid-19 pandemic delayed it until last July. To reduce the risk of contagion, it is limiting the number of people inside to 75, capping visits at 90 minutes, and requiring everyone to wear a mask. Even with such restrictions, the building offers children the chance to explore a labyrinth of learning and perhaps get lost in a book that takes them somewhere unexpected. 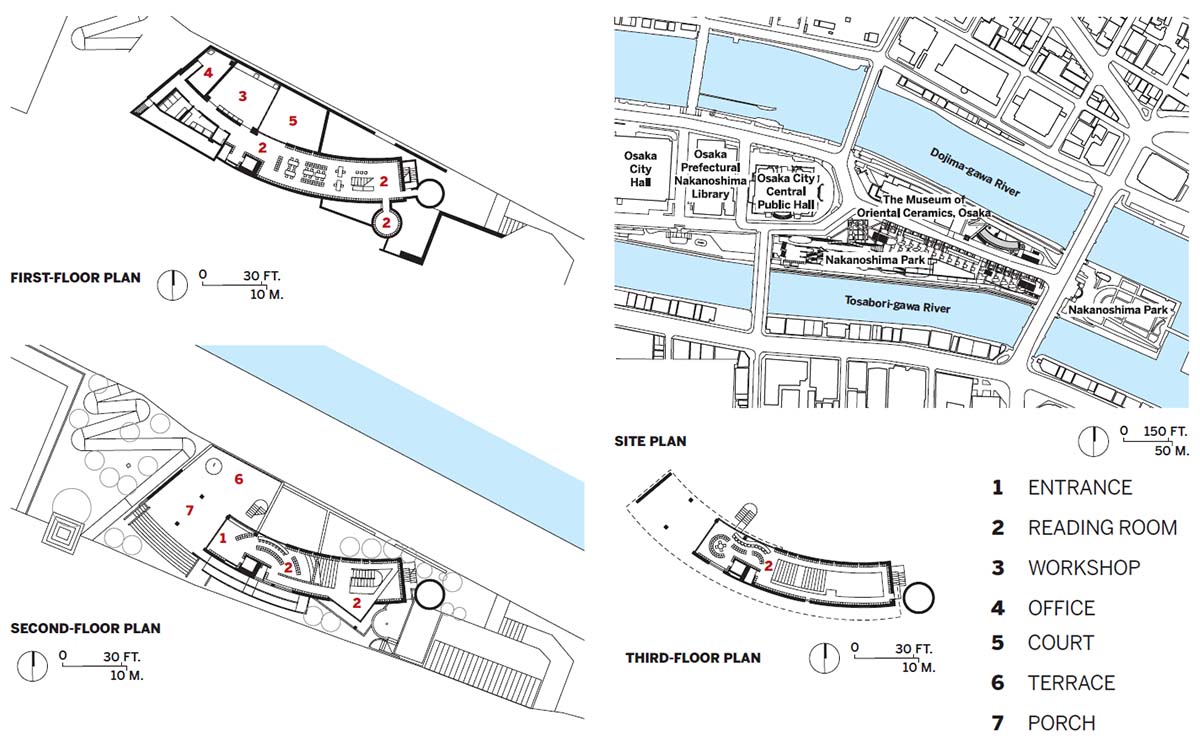