Town of the Blue Mountains, Ontario

As any alpine skier can tell you, terrain and snow conditions are what it’s all about. The ski lodge comes in a distant second, little more than a place to seek nourishment and warm up between runs. A utilitarian typology reflects this hierarchy: whether the rustic chic of Aspen or the rinky-dink local hill, exposed timber, gabled roofs, and drab furniture set the tone. But with its recent reinvention of the clubhouse for the Osler Bluff Ski Club in eastern Ontario, Toronto-based architects Williamson Williamson have brought dignity to a usually kitschy building type with a bold and graceful use of traditional wood and glass. 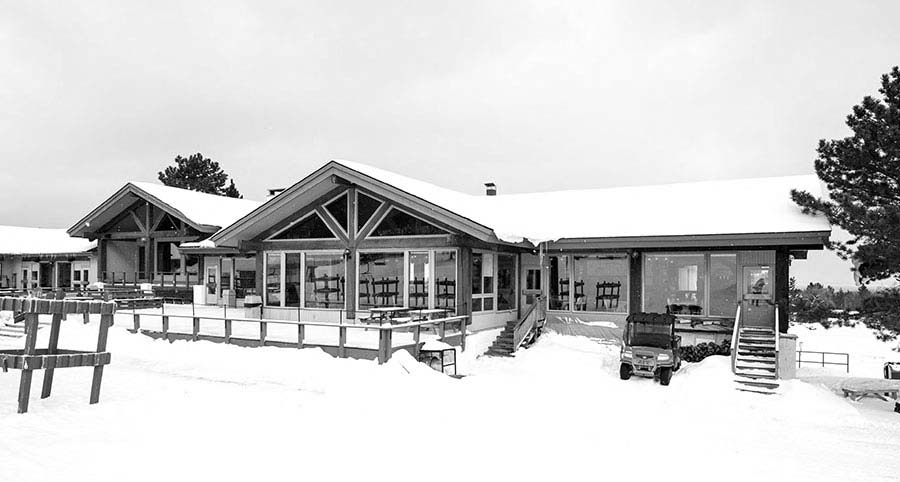 The club in its previous life. Photo © Bob Gundu, click to enlarge.

Osler (not a commercial resort but a private club, which is common in this area) has a rich history. It was founded in the post–World War II years by two ski enthusiasts who purchased a prime parcel of land along the Niagara Escarpment, with views out to the Georgian Bay. Joined by a scrappy, like-minded bunch, they cut trails and built the first clubhouse. When it burned to the ground, the membership—which today includes families with four generations of skiers—replaced it in 1979 with a basic ranchburger-like structure, designed by Toronto firm Moffat Moffat & Kinoshita.

Over the years, with the arrival of high-speed chairlifts and advances in equipment, skiers were getting in more runs per hour, resulting in more off-hill time and indoor crowding. “We called it the Osler forced-intimacy program,” says facilities manager Jamie Cuthbert. Commissioned to conceive a master plan, Williamson Williamson quickly focused on reenvisioning the clubhouse to increase seating for members and facilities for staff (which had grown substantially from the early days when members took care of the place); improve circulation; incorporate a childcare center (previously located in another structure); make the building fully accessible, and, critically, create a better après-ski experience for a membership that clearly likes to party. The members had strong emotional ties to the existing clubhouse, so retaining its spirit of simplicity was paramount, as was minding the budget. A renovation and expansion was the way to go. 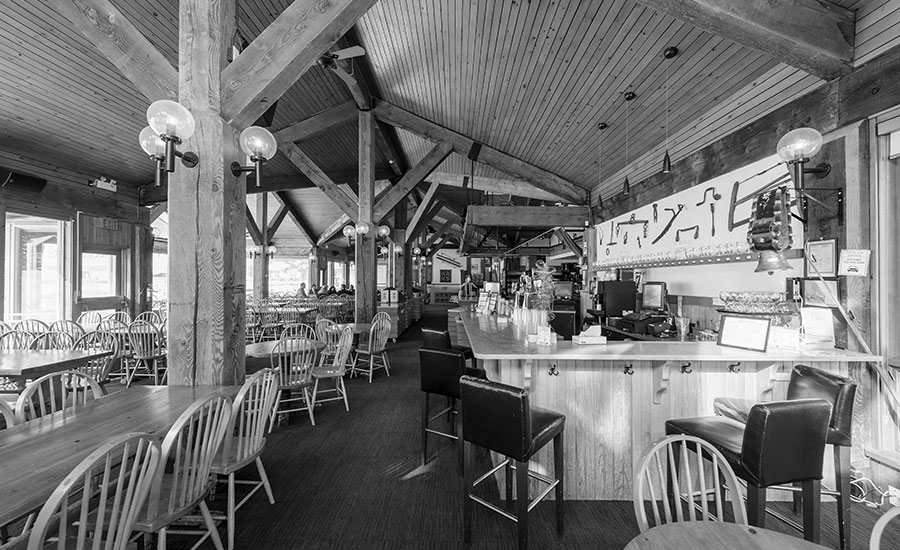 “Before” image of the lodge’s interior. Photo © Bob Gundu

But a building like this one, with a Douglas fir timber frame and a hollow-core slab, “is nearly impossible to renovate,” says principal Betsy Williamson, who runs the firm with her partner Shane Williamson. “You cannot take a piece out, since, with heavy timber, every member is loaded to full capacity. And you cannot cut into the core slab, because it would lose its structural integrity.” So the team kept the original building more or less intact, removing the end gable to push the volume out to the east and add about 10,000 square feet over two levels. The existing frame, which had formed the shell and was exposed to the exterior, was badly cracked and needed to be moved inside. Removing the 40-year-old leaky, single-pane glazing, the team reskinned the east and mountain-facing south facades, largely maintaining the other sides, though replacing the asbestos cementitious cladding with an Exterior Insulation Finishing System (EIFS). In so doing, they essentially encased the building and its original timbers in a wood-backed curtain wall composed of western red cedar paneling and Douglas fir with low-E double-pane, argon-filled IGUs. In addition to tightening the envelope, the team replaced the mechanical systems, bringing the building up to code and into the 21st century. For the extension, the architects reinterpreted the original treelike columns, distilling the form down to elegant steel Y columns clad in oak. 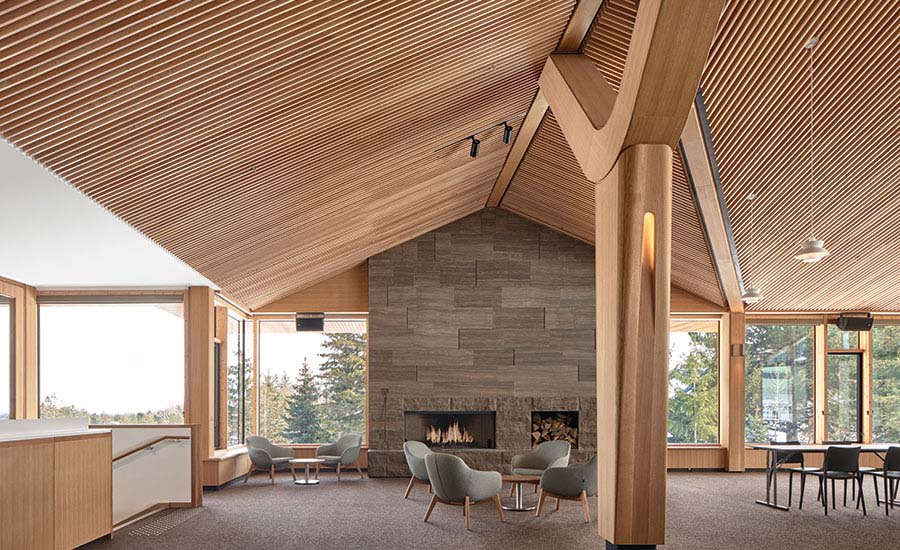 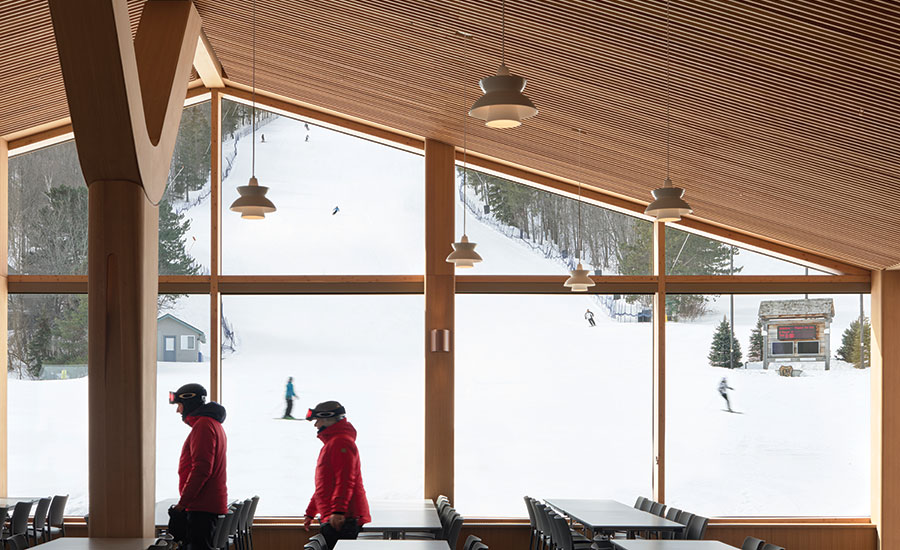 The new extension pushes out to the east, bookended by a large stone fireplace (1). New steel Y columns (1 & 2) are clad in oak veneer with CNC-milled slots that conceal LEDs and that were inspired by the shape of carved antique wood skis. Photos © Doublespace

A central idea of the intervention was to create a variety of interior spaces rather than the standard lodge format of one big room. The main floor’s great room, with its substantial stone fireplace and adjacent bar, offers a generous venue for rollicking socializing, and connects to the once-isolated lunchroom. For those desiring a low-key vibe, the main level also holds intimate seating areas and a cloistered Founders Lounge with views up the hill. The lower level includes locker rooms and spaces for childcare and back-of-house. 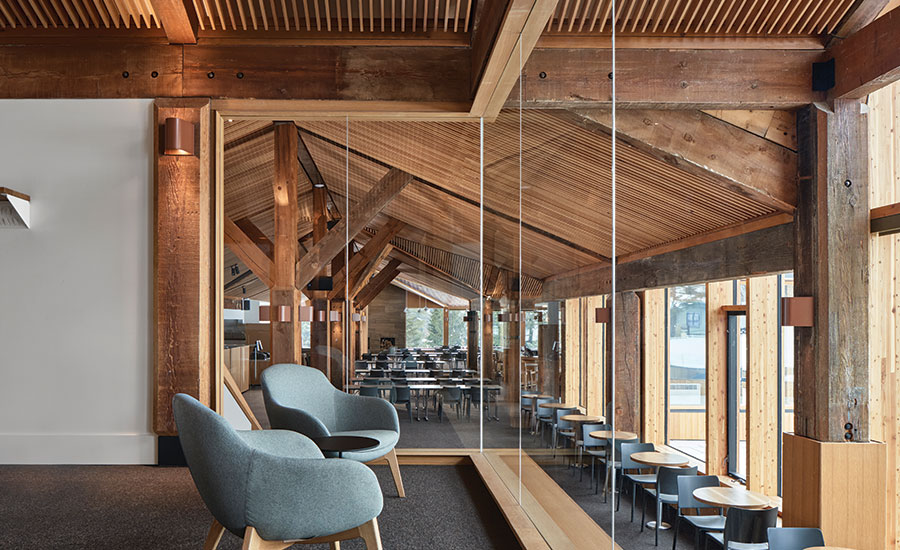 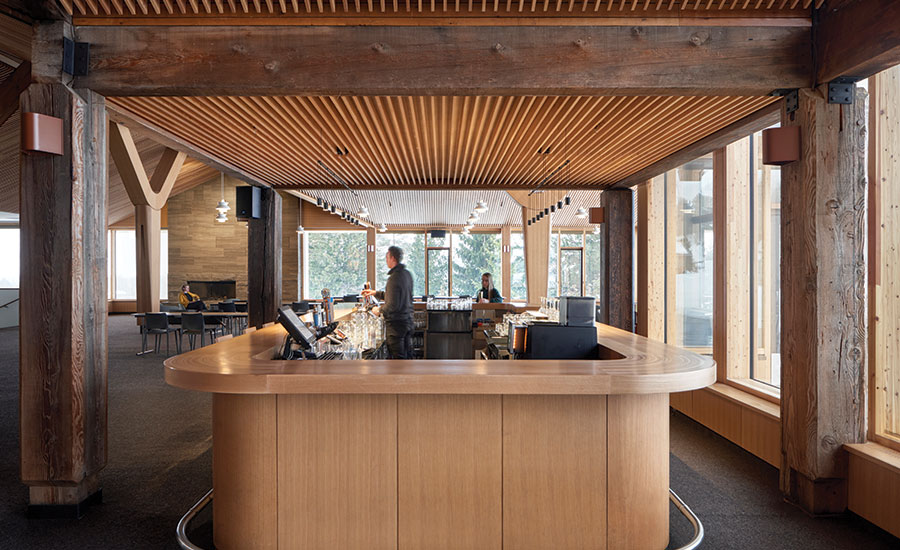 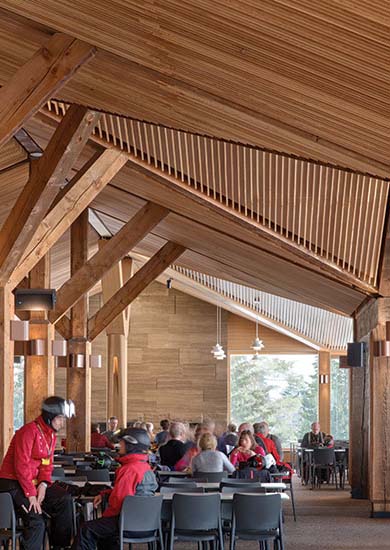 The Founders Lounge (3) looks out to the slope. A Douglas fir–backed curtain wall protects and harmonizes with the existing timbers (3 & 4). The acoustic ceiling, also of Douglas fir, ties the interior spaces together, conceals sprinklers and wiring, and creates a welcome hush (3, 4, & 5). Photos © Doublespace

A new Douglas fir acoustic ceiling hovers above the entire interior. Besides formally unifying the various spaces, it mitigates the decibel levels that previously were unbearable. “We’ve established an acoustic warmth,” notes Betsy Williamson, “which has a big effect on how you perceive the space.” The team worked with an acoustical engineer to develop an optimal section for the custom ceiling panels, composed of thick insulation covered with fireproof fabric and untreated Douglas fir fins. These elements nestle between the existing beams, acknowledging the building’s past while concealing sprinklers, lighting, and wiring. 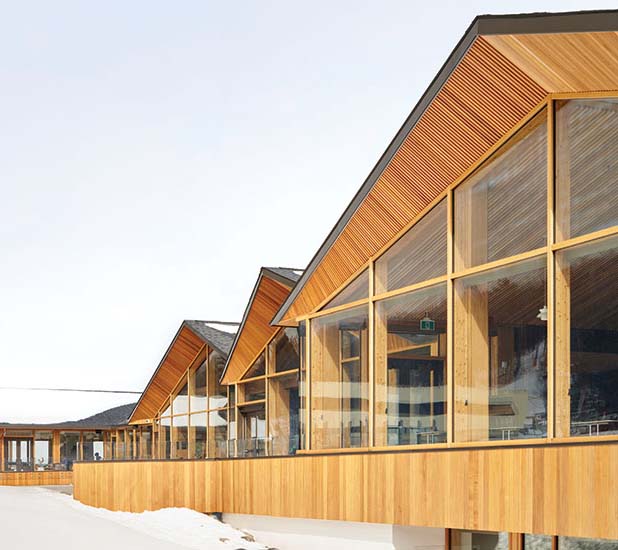 The value of the acoustical dampening, along with the larger intervention here, cannot be overstated. “As a club, more generations of people can come together,” says Cuthbert. Before, the older folks tended to leave as après-ski festivities kicked up. “Now, everyone remains to enjoy the events.”

Osler Bluff opened its season with Covid accommodations in place but, just before Christmas, was forced to shut down amid concerns of burdening the hospital system with ski injuries as ICUs approached capacity. As of this writing, the members hoped to reopen soon to salvage the season—both on the hill and off. 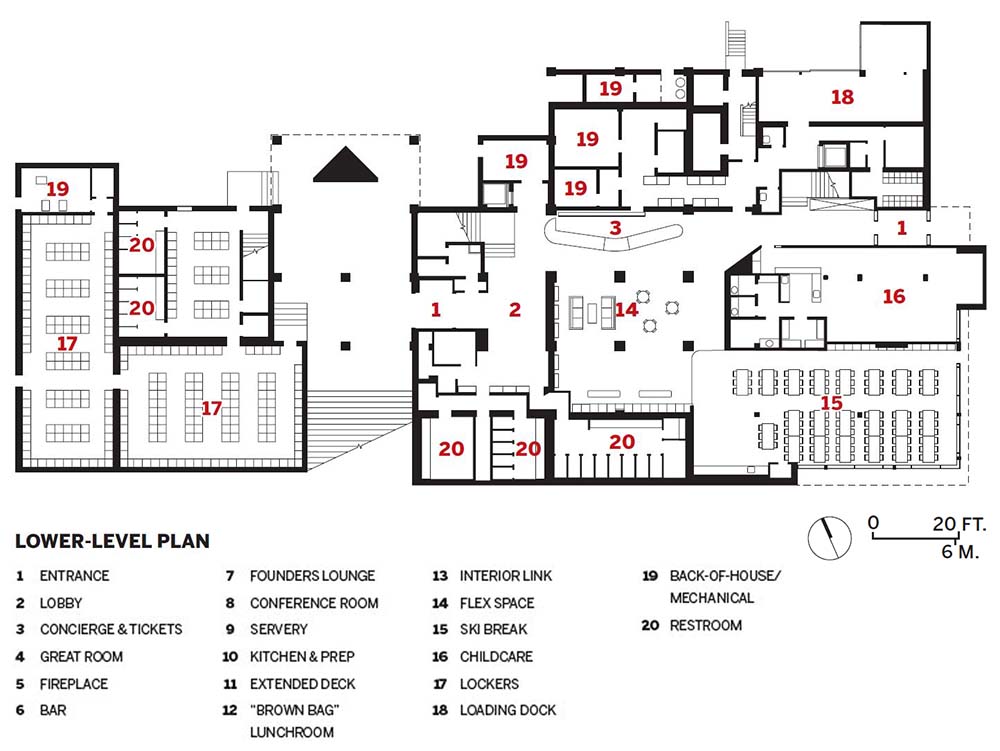 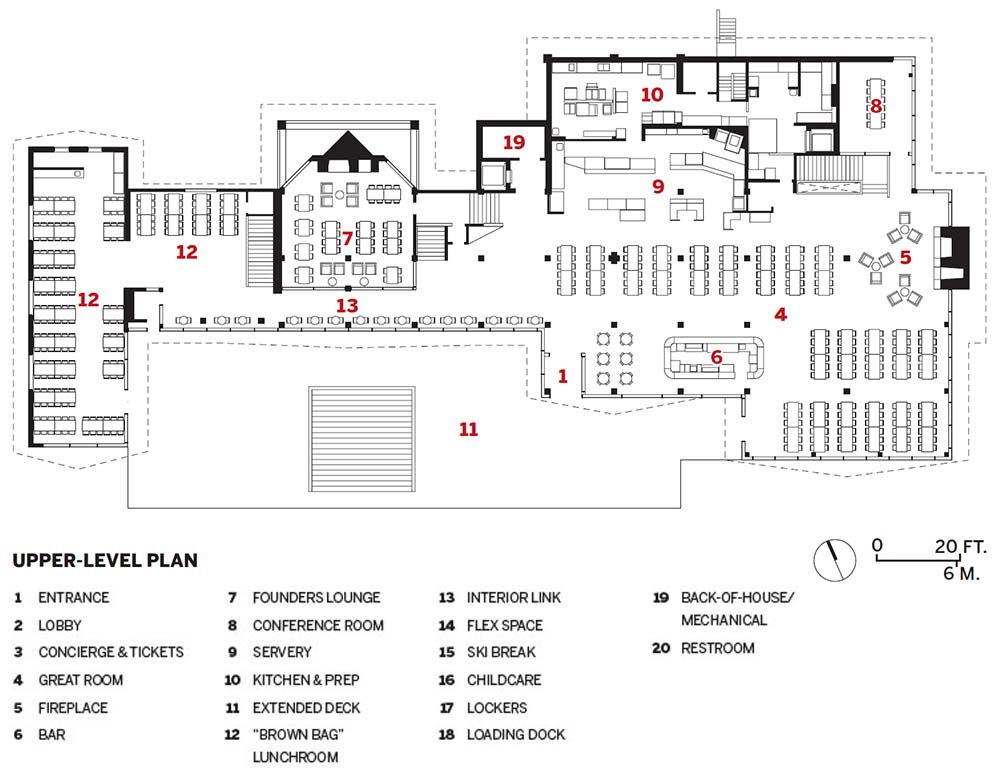