The first of six reports, called “Baseline on Belonging,” shows significant disparities in the progress of minorities toward licensure and an apparent bias against those who are older. The just-released report, produced by a partnership of the National Organization of Minority Architects (NOMA) and the National Council of Architectural Registration Boards (NCARB) intends to identify barriers to licensure for women and minority candidates. This report focused on the Architectural Experience Program (AXP) where architecture graduates gain structured experience in firms.

It found the percentage of diverse candidates slowly increasing among those who completed the program in 2019. More white men and women finished the AXP (63 percent) than minorities but that is only slightly higher than non-Hispanic whites in the general population (60 percent). Asians, accounted for 17 percent of completions, considerably overshooting their numbers in the population (6 percent). Hispanic participants were 13 percent, (compared to 19 percent), while African Americans remained poorly represented at 3 percent versus 13 percent of the general population. The numbers of Latino and Asian candidates are the most rapidly growing in this group. 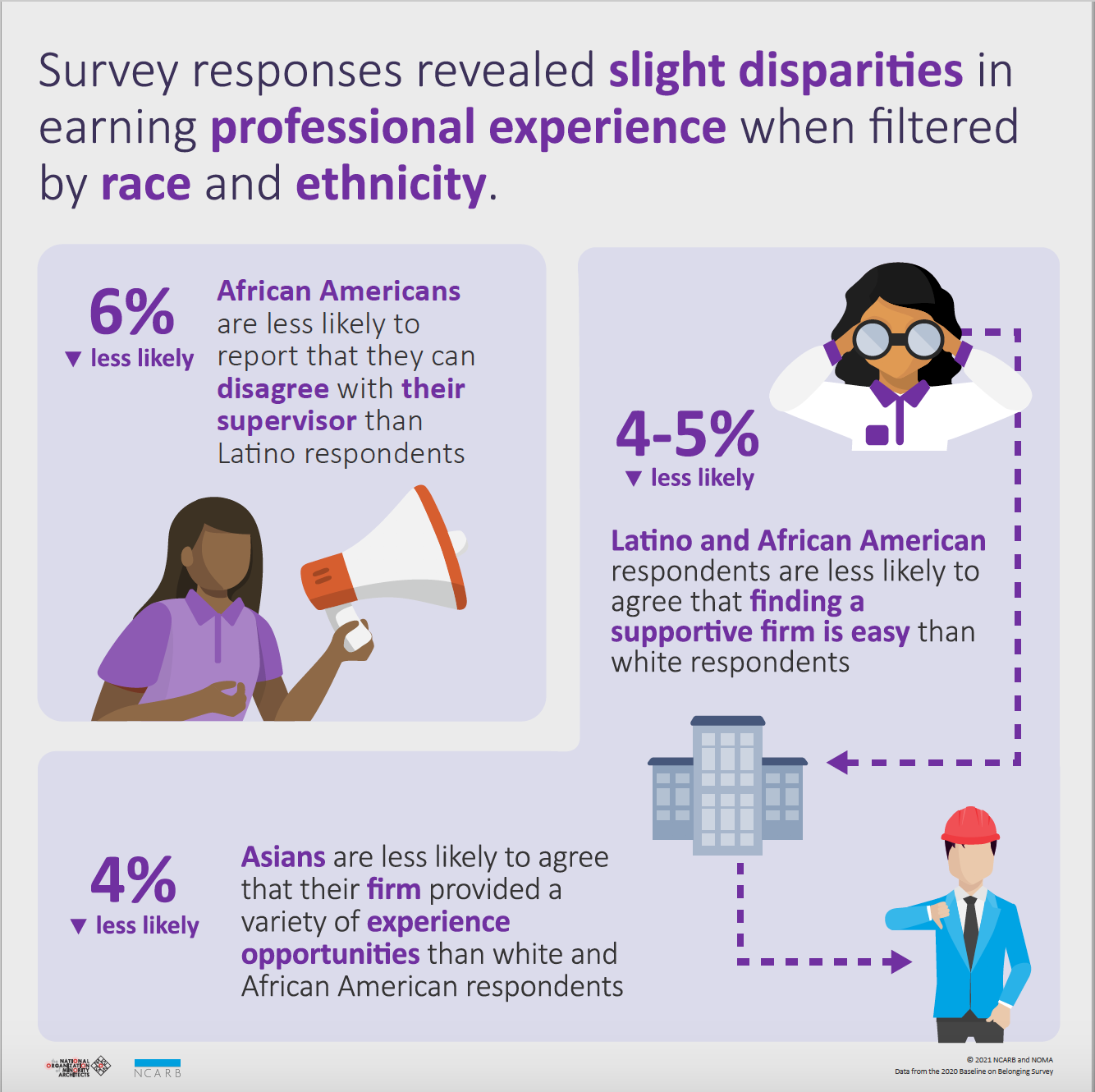 The gender disparity in AXP completions was greater. White women are still 12 points behind men—at 36 percent. Black women, at 1 percent completion, are far from parity, even compared to Black men, who register at only 2 percent. 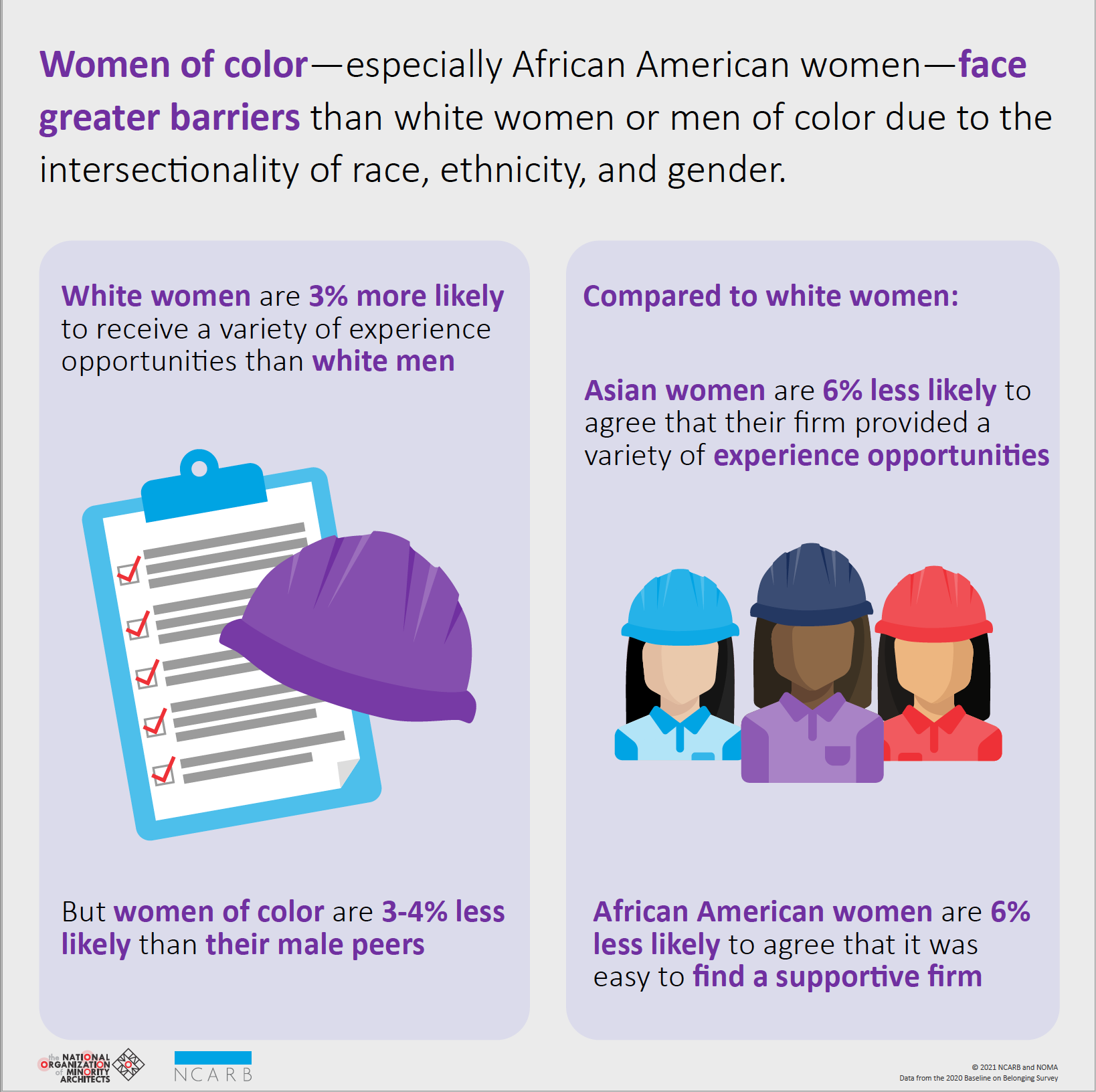 The survey asked participants about how well firms supported their AXP goals, the quality of their supervisor’s support, and the level of difficulty they encountered meeting the requirements. The responses showed noticeable but not large differences in the experiences of minorities and women, though those who belong to two or more of the non-white male categories tended to express greater dissatisfaction with aspects of the program. Black women, for example, were less pleased in a number of categories.

Older participants were less satisfied with AXP among all surveyed groups, with candidates over 40 expressing the greatest dissatisfaction. This is concerning because the findings may be seen as a proxy for a lack of advancement opportunities, though further research would be needed. 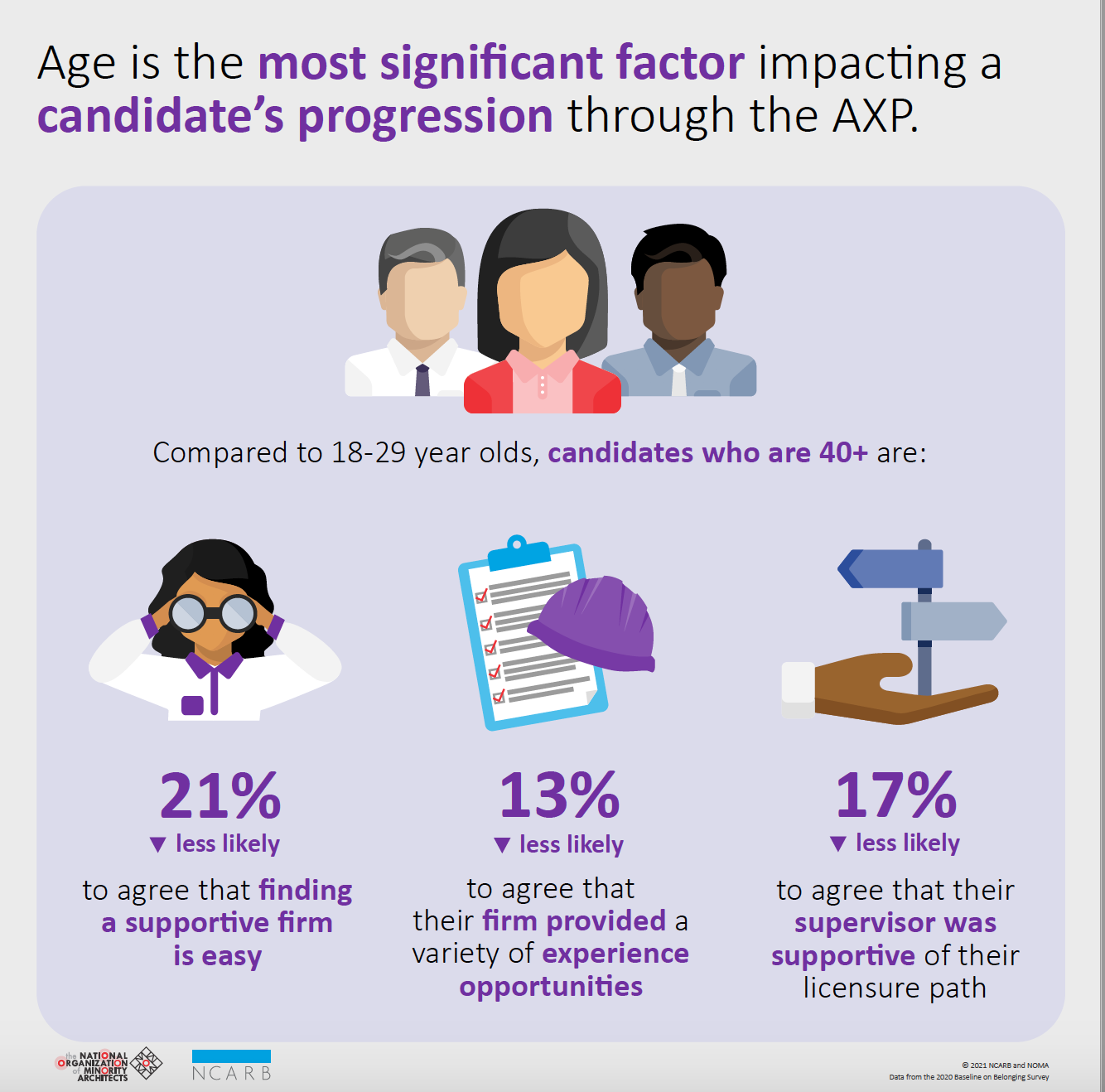 Asked whether participants had experienced challenges in earning AXP credit—which takes on average about four years—about 60 percent said no, but about one fourth said yes. That result is ambiguous enough to deserve greater scrutiny: do AXP’s rigors shut out too many?

A small percentage of survey participants had abandoned the quest for licensure. More than half of those cited poor compensation at their jobs, lack of work/life balance, and the overall cost of licensure. Almost half of those who decided not to become architects made that choice while working at a firm, which suggests too many find actual practice less satisfying than they expected. Fewer drop architecture while in school or due to the rigors of the architecture registration exams, or even because of a difficult job search.