A megastructure set in a megalopolis, Tianjin Juilliard aims to be both big and agile. It’s a campus in a building, a descendent of the energetic, multipurpose contraptions dreamed up by Cedric Price and Archigram six decades ago in Swinging London. “Our practice has always been influenced by the great thinkers of the ‘60s and ‘70s,” says Charles Renfro, the DS+R partner in charge of the Tianjin project. “We certainly thought about Price’s Fun Palace and how you can create a place where lots of different things can happen, both programmed and unprogrammed.” But while many of the super-sized structures from that era turned their backs on their surroundings, Tianjin Juilliard tries to establish a close relationship between building and context.

The 350,000-square-foot complex sits in a riverside park in the rapidly growing Yujiapu Financial District of Tianjin, a port city 85 miles southeast of Beijing that has been the focus of intense development over the past 20 years. High-speed trains now connect the capital’s 21 million residents to Tianjin’s 15 million people in just 45 minutes, creating a vast sprawl of urbanization. 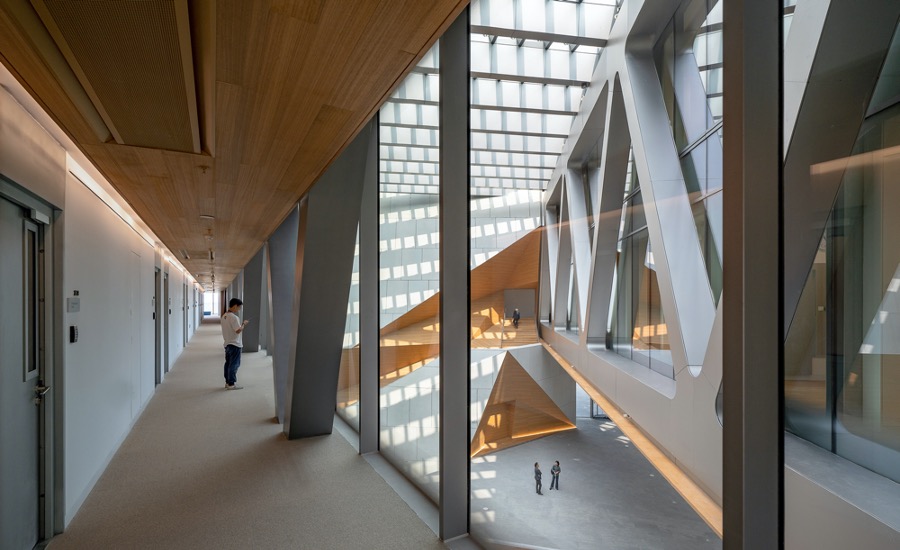 To break down the bulk of the Juilliard building, DS+R carved it into four pavilions, each articulated with its own faceted form and each looking out in a different directions. Three of the pavilions contain major performance spaces—a 690-seat concert hall, a 299-seat recital hall, and a 225-seat black-box theater—while the fourth houses rehearsal studios, administrative offices and a library. A large, skylit lobby ties all of the pieces together and reaches out to the park with six entrances. Open to the public, the lobby acts as a civic space and an extension of the park, says Renfro. 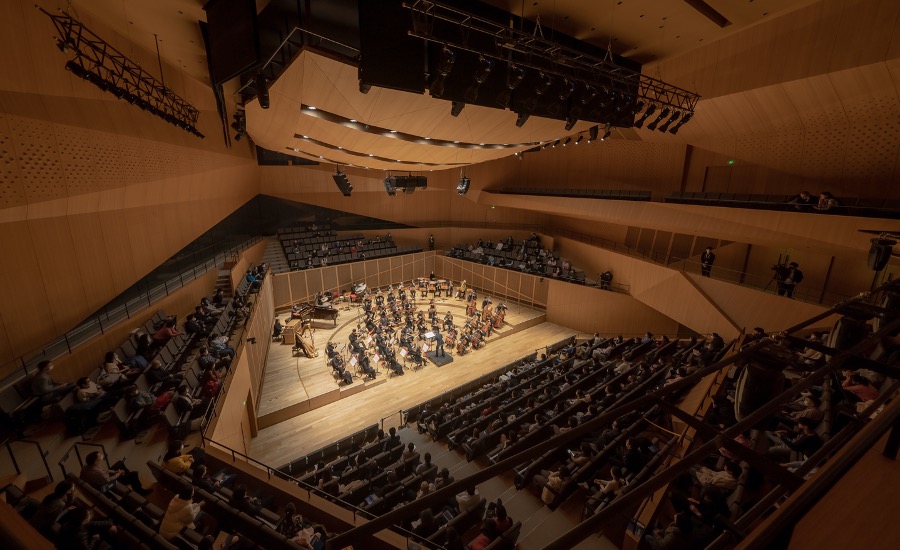 A critical aspect of DS+R’s design strategy was submerging each of the performance spaces one level below grade. This allowed all of the back-of-house areas to be underground as well, so the ground floor is uninterrupted and flows from park to lobby and back out to the park. The architects tipped up the corners of each pavilion and wrapped the ground floor with glazing, letting passersby look into the various music halls and the lobby. DS+R did much the same with its renovation and extension of Juilliard’s home in New York City, transforming Pietro Belluschi’s 1960s Brutalist building into a more open structure connected to the rest of Lincoln Center and the streets around it. “We wanted to take that DNA of transparency and openness and implant it in Tianjin,” says Joseph Polisi, who worked with DS+R on the Manhattan project when he was president of the performing arts school: he now serves as its chief China officer. 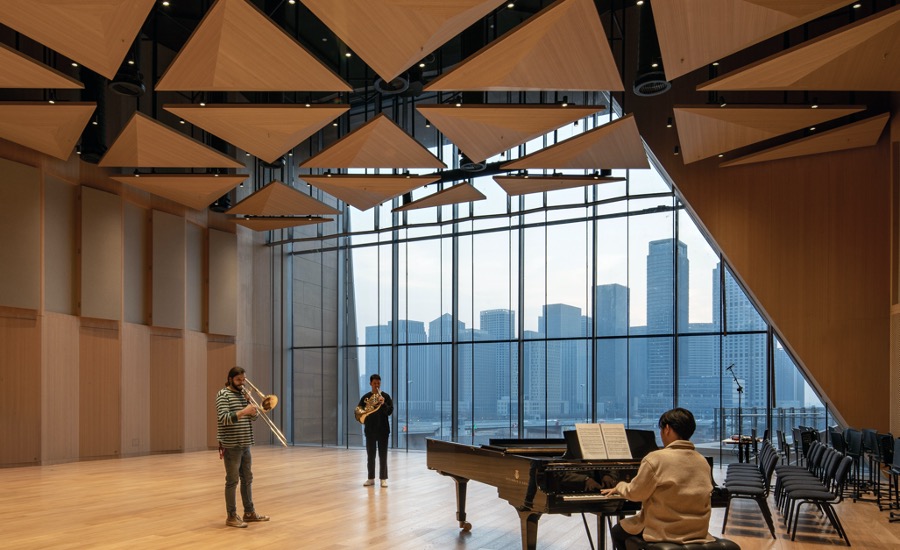 Crisscrossing the lobby and knitting the pavilions together on upper levels is a series of five steel-truss bridges glazed on two sides. Classrooms, teaching studios, and practice rooms line these bridges, presenting their activities to people in the lobby and the park. Triple-glazed IGU’s in combination with double walls between practice rooms prevent sound from escaping and creating a cacophony of competing music. At the end of each bridge is a double-height student lounge with views to the park and the surrounding areas. “We wanted circulation spaces to be vibrant and have architectural significance,” says Renfro. 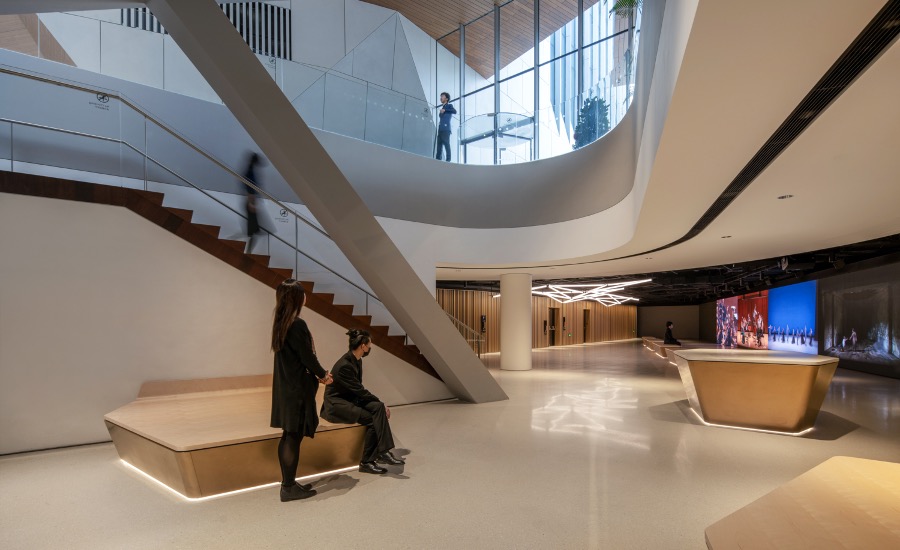 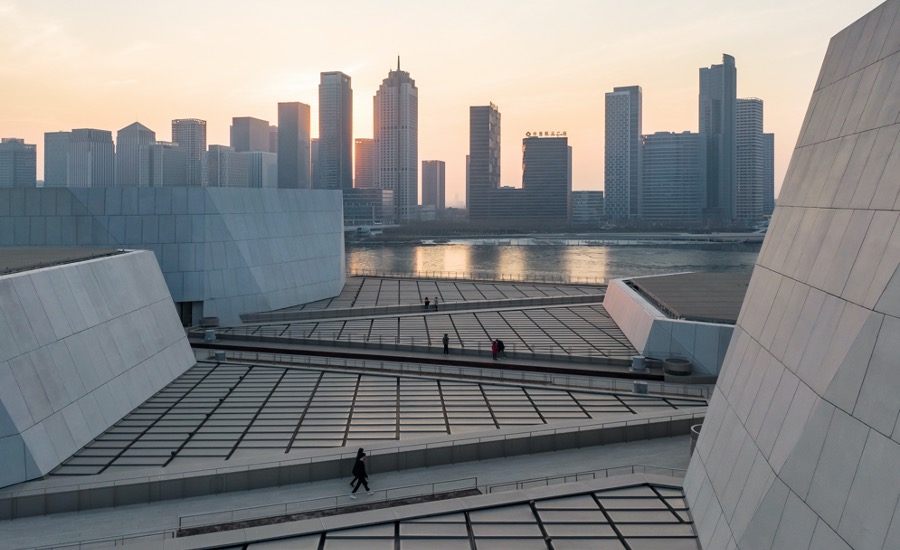 An “Imagination” space below grade is equipped with large screens and sophisticated digital technologies that connect it to Juilliard in New York and allow it to show live and recorded performances. While the lower level and ground floor are open to the public, students and staff must pass through security to get to upper floors.

On the outside of the building, DS+R specified glass-fiber-reinforced-concrete panels that have been sandblasted to reveal dark aggregate and give the impression of stone. The firm sculpted each pavilion, so together they appear as a collection of buildings. A public, outdoor stair snakes up the volume with the concert hall, taking people to terraces on top of the zig-zagging bridges. Inside the concert and recital halls, DS+R used wood panels to give resonance to the sound and applied much of the knowledge it had acquired from its work at Lincoln Center a decade ago to make the music sound its best.

Tianjin Juilliard is the first performing arts institution in China to offer a U.S.-accredited Master of Music degree and is Juilliard’s only satellite campus. It opened last September and, like most schools in China, is operating with in-person classes and performances. “We’ve long been an international institution with about 30 percent of our students coming from outside the U.S.,” says Polisi. “Now we are a global one.” 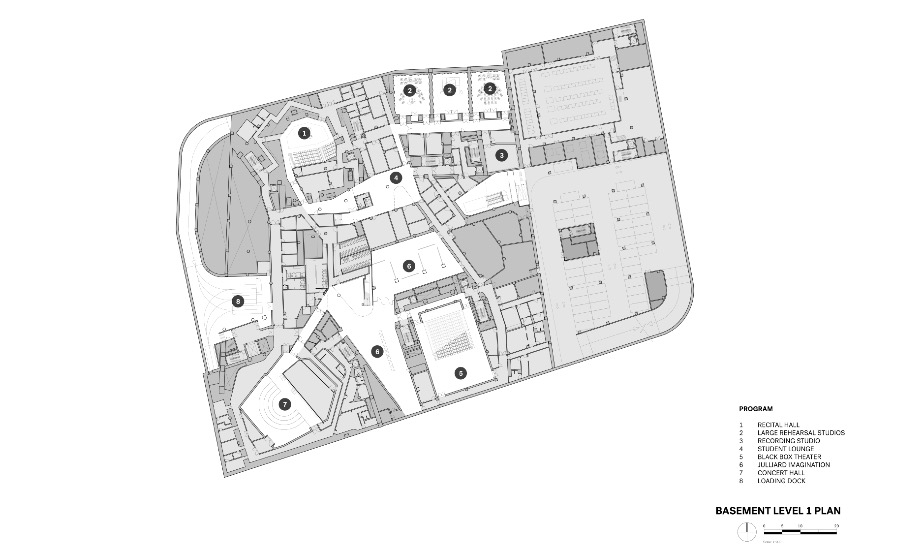 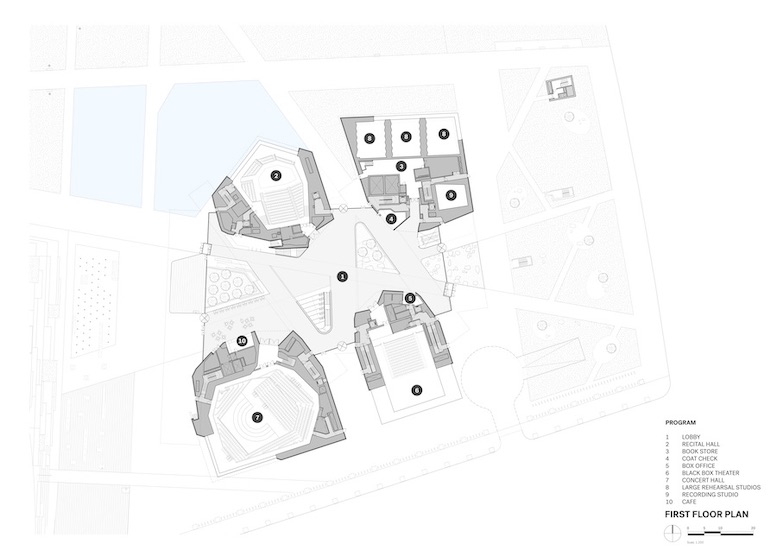 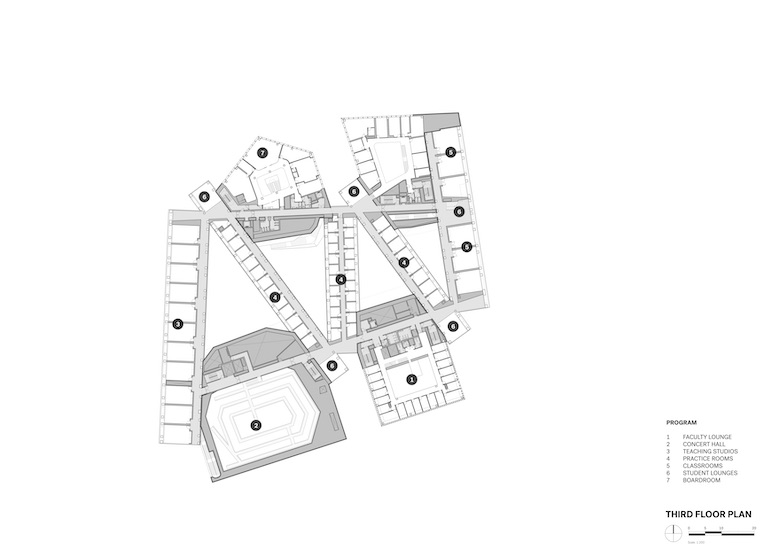