Review of 'Megastructure: Urban Futures of the Recent Past'

Reyner Banham’s long-unavailable 1976 book has been reprinted, with an incisive new foreword by Banham historian Todd Gannon. It is especially welcome at a moment when the urban-planning and utopian projects of the late 1960s and ’70s are increasingly under critical review, assessed as monumental failures subject to demolition or as aesthetic exemplars of their age demanding preservation. A brilliant historical survey, conducted during the height of the short-lived movement and by a central player in the western architectural world of the time, the text provides insight into the aims behind what was called the “megastructural” movement, and useful categorizations of its different manifestations. First defined by the Japanese Metabolist Fumihiko Maki, in 1964, following the spate of projects for rebuilding that emerged from Kenzo Tange’s Tokyo office in 1960, the concept of megastructure as “a large frame in which all the functions of a city or part of a city are housed” soon took hold. It was a way for architects to respond to the demands of infrastructure, monumental form, and mass production integrated at a scale that went beyond the Modern Movement’s urban-zoning principles, to create buildings that were miniature cities and city developments conceived as single buildings. 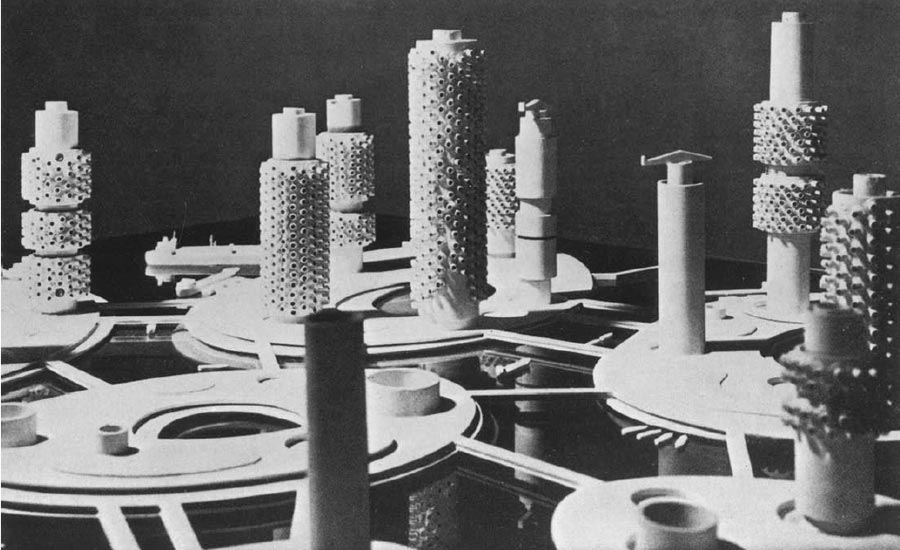 Banham traces the origin of the concept to Le Corbusier’s drawings for the unbuilt Fort L’Empereur, Algiers (1931): “the massive sub-structures of an elevated super-highway, built like a gigantic bookcase of reinforced concrete on the shelves of which the inhabitants have built two-story houses to suit their own tastes,” as Banham describes it. Postwar megastructures took their cue from a wealth of earlier precedents—vernacular (the pueblo of Mesa Verde) and Modernist (the Futurist designs of Antonio Sant’Elia)—utilizing hi-tech vocabularies (such as Archigram’s) and “Brutalist” reinforced-concrete structures (Paul Rudolph’s Lower Manhattan Expressway project).

Banham, himself an enthusiast of technological utopianism as found in the industrial structures of oil refineries and Cape Canaveral, had been an avid chronicler of the trend from the outset, and offers an inside look at the academic, idealist planning and construction of the genre from its utopian phase—Louis Kahn’s City Hall (1958), Paolo Soleri’s Mesa City project (1959), Yona Friedman’s “Spatial Urbanism” (1960)—to the realized projects that followed: Candilis, Josic, and Woods’s Free University of Berlin (1963), Owen Luder’s Tricorn Centre, Portsmouth (1966), Moshe Safdie’s Habitat and Ray Affleck’s Place Bonaventure in Montreal (both 1967), and culminating in what for Banham represented both the triumph and the end of the megastructural experiment, Piano and Rogers’s Centre Pompidou, Paris (1977).

In an echo of his earlier book summing up the Brutalist phase of postwar architecture, Banham’s account reads now like an elegy for failure. Even as the “New Brutalism” started as a promising ethic of “as found” materials under postwar privation but had ended as an aesthetic style, so megastructures—which had begun as an attempt by architects to develop a new physical paradigm for an egalitarian social order—were inevitably subject to the political and economic forces of emerging neocapitalist development. While those megastructural housing and new-town projects that were built under socialist governments in postwar Europe were successful in providing high-quality environments for their populations, those types of buildings were unable to survive Thatcherite privatization in Britain and neoliberal development in Western Europe. Center-city megastructural reconstruction in the U.S. was, in turn, bound to serve business and consumer clientele under the rubric of “slum clearance.” Architecture—whether ethical or aesthetic, in Banham’s terms—was unable to offer resistance to the political economies of increasingly globalized monopolies.

Anthony Vidler is professor at and former dean of the Irwin S. Chanin School of Architecture, Cooper Union, and a historian and critic of modern and contemporary architecture.

Review of 'Schinkel: A Meander Through His Life and Work'

Review of 'Saving America’s Cities: Ed Logue and the Struggle to Renew Urban America in the Suburban Age'