“A question that pops up regularly is, ‘Why a tower?’,” preemptively declared billionaire Swiss pharmaceutical heiress Maja Hoffmann at the inauguration of the latest addition to her $175 million LUMA Foundation for the arts in the ancient-Roman town of Arles, France. “I just wanted to say it came out of me and not out of the architect alone.” The architect is Frank Gehry, whom Hoffmann first approached in 2008, just after she’d signed a deal with the Ville d’Arles to convert a 16-acre railroad repair yard into an ambitious new cultural campus.

Located on the outskirts of town, the Parc des Ateliers, as the former industrial site is known, was home to an impressive collection of 19th- and early-20th-century atelier buildings, which have since been partially demolished to create space for a new public park (brilliantly realized by Bas Smets), with the remaining structures being converted for artistic use—the Grande Halle by Moatti Rivière in 2007 and the rest, rather more sensitively, by Selldorf Architects in the years since (Record, February 2017). But, evidently feeling her foundation (which combines the first two letters of her children’s names, Lucas and Marina) needed a contemporary architectural statement, the billionairess ordered up a bit of that old Bilbao magic to help put LUMA Arles on the global cultural map.

The program “developed as we went,” says Gehry. “Maja was not just a client who said, ‘Do a building.’ She turned out to be a fantastic artist on her own, and so I look at this as a collaboration.” Twisting and turning 184 feet up into the Arlésien sky (if measured from the entrance on boulevard Victor Hugo—and 217 feet from the Parc des Ateliers, which was scraped down to bedrock when the railroad was first laid in 1844), the new building comprises a giant podium—containing numerous exhibition galleries, meeting rooms, technical areas, and a library—on which rises the tower proper, a 10-story edifice containing more galleries, a café, an auditorium, “seminar rooms in which discussions can be engaged” (Hoffmann’s words, since her foundation aims not just to display art but to produce it through artists’ residencies), a whole floor of members’ rooms, offices and, of course, a viewing terrace at the top.

Encircling the first three levels of the tower is a steel and glass “drum” (which Gehry facilely compares to Arles’s Roman amphitheater) that encloses a spectacular public atrium ascending between the various bits of the building’s structure. This consists of a concrete core supporting a free-form steel frame, with the ensemble clad in a mix of giant concrete panels, made to resemble stone, and a cascade of ashlar-like “pixels” in stainless steel (11,000 of them altogether) that catch and reflect the light. As the sun sets, they wink and twinkle in shades of peach and pink, leading Gehry to compare the effect to Van Gogh’s Starry Night Over the Rhône, painted in Arles in 1888. 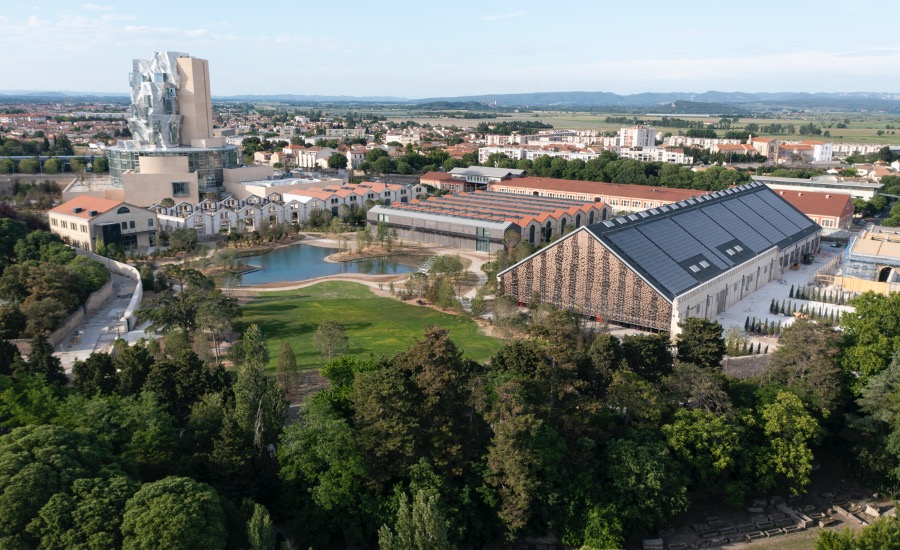 While the requisite Gehry fireworks whizz and bang as expected, the usual Gehry weaknesses are present too: convoluted spaces that often seem less than ideal for their purpose (while this may be the inevitable price to pay in the tortuous tower, it seems inexcusable in the orthogonal podium, where some poky, badly detailed galleries can be found); in a certain sloppy handling here and there (with so much going on you can’t control it all); and in a hard-to-negotiate layout (the hunt for the bathrooms can be epic, and chances are you’ll miss the door to some key galleries if you’re not paying attention). Rather surprisingly, for a building that is a sculptural object in the landscape, it has a definite and to some not-so-prepossessing backside (“flat butt” wrote one commentator when I posted it on Instagram). Site-specific artworks are, of course, incorporated everywhere, among them a skate park by Koo Jeong A on the roof of the main entrance-level gallery; a ceramic mural by Etel Adnan in the auditorium; and two of Carsten Höller’s vertiginous slides in the atrium, which provide a fast route down from level three.

Located not only in a UNESCO World Heritage Site, whose sole towers, until now, were the belfries of Romanesque churches, but also in the flat landscape of the Camargue, the Tower can be seen from literally miles around. When asked if it was important that her building should dominate its context, Hoffmann shut down all discussion with a peremptory “It was not important to me.” This disingenuousness—as monumental as the building she and Gehry have created—will be further grist for disgruntled locals, who have compared the Tower to a crumpled tin can. Architect Marc Barani knew there was no competing with it when he built his 2019 École Nationale Supérieure de la Photographie just opposite, instead choosing to play with the proximity in his low-slung, horizontal building: the antithesis of the “Look at me!” billionaire’s bauble, it creates mystery and place out of the intangibles of light, shade, and space. Where one side of the boulevard is all subtlety and suggestion, the other is a relentless demonstration, the architectural equivalent of Coney Island. But it’s Luna, sorry LUMA, Park that is by far the more photogenic of the two and will draw the crowds, perhaps turning Hoffmann’s esoteric contemporary-arts campus into the popular leisure destination she dearly wishes it might also become.