This past weekend, the Massachusetts Museum of Contemporary Art (MASS MoCA), in North Adams, unveiled The Pipes, a monumental sculpture of 11 cylindrical concrete towers created by artist Taryn Simon in collaboration with architect Shohei Shigematsu, a partner in the New York office of OMA.

The work was first conceived as the set for An Occupation of Loss, Simon’s 2016 exhibition at New York’s Park Avenue Armory. There, the 42-foot-tall pipes, each eight feet in diameter and arranged in a semicircle, were activated by the laments and chants of professional mourners who traveled from Burkina Faso, Cambodia, Russia, Venezuela, and Ecuador. During 30-minute sessions, an audience of about 50 people was ushered into the Armory’s darkened drill hall where they were free to walk around and peer into the cylinders, experiencing the haunting sounds resonating within and emanating out of them. 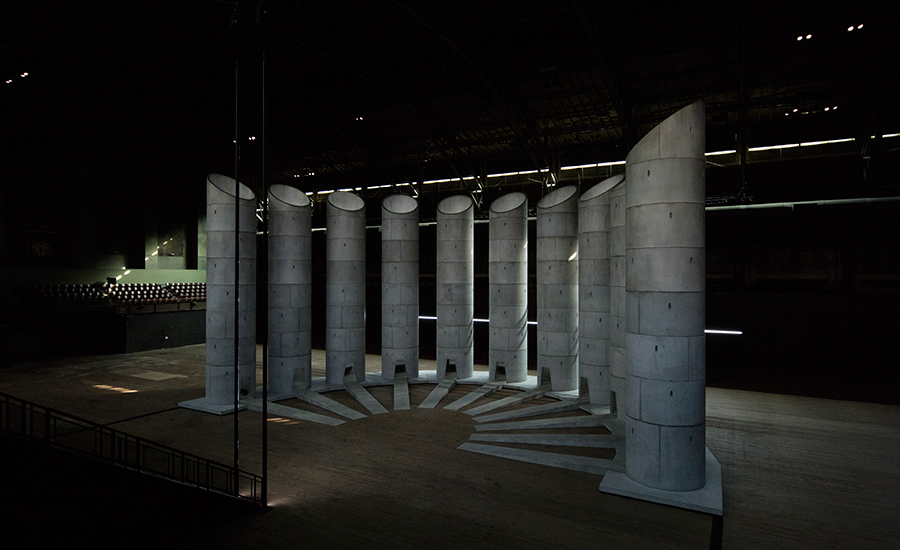 The design was first created in 2016 at New York’s Armory.

At MASS MoCA, where it will remain on long-term view, the sculpture has been installed outdoors and has a less somber character. The towers form the same footprint as at the Armory, but they have been shortened to 22 feet. The new height responds to concerns about wind loads but maintains the cylinders’ sonic properties. MASS MoCA visitors can fill The Pipes with the sounds of their own voices, or—since the top of each tower forms an aperture open to sky—quietly contemplate the clouds. Simon says that the concrete ledges inside are the perfect length for a person to lie down on and gaze up at the stars. The museum envisions the sculpture as a setting for performances—both organized and spontaneous. As part of The Pipes’ inaugural weekend, a group of local high school students improvised on their own instruments, including drums, horns, and a guitar. The installation is now the “site of joy instead of mourning,” says MASS MoCA curator Alexandra Foradas.

In retrospect, Simon sees The Pipes as a metaphor for “what we have all just been through,” she says, referring to Covid. Each tower offers visitors a chance for solitude but also allows them to be aware of what is happening in the other towers. “The pandemic kept us separate and alone but it was a collective experience.”

One aspect that was planned from the start was for the piece to have a life after the Armory. That is why the towers’ components were designed as 5-foot-tall segments and were cast with integrated brackets that allow them to be lifted by a crane. Shigematsu says that the transportable and adaptable sculpture should be a model for other installations, adding that the robust materials and industrial forms work especially well with the museum’s 19th-century former mill buildings as a backdrop.

Coincidentally, The Pipes sits just steps away from C.A.V.U., a James Turrell “Skyspace” in an abandoned concrete water tank. Designed with the assistance of the architecture firm Bruner / Cott & Associates, it opened a few weeks before The Pipes. Turrell’s domed room has an operable roof that is left open early and late in the day, revealing an oculus that frames the sky—much the same way that the top of each of Simon’s cylinders does—but with subtle electric lighting that responds to the changing atmospheric conditions. When the aperture is closed, the chamber is more dramatically illuminated, with different colors projected across the ceiling. C.A.V.U. is the latest addition to a comprehensive set of Turrell pieces on long-term view at MASS MoCA, including nine other large-scale immersive light and space installations.

Though many pandemic-related restrictions have been recently lifted at MASS MoCA, the museum encourages visitors to reserve timed-entry slots in advance. Additional information about remaining Covid precautions and exhibitions that require separate timed tickets (including some of the Turrell pieces) can be found on its website.