For two intense weeks in early November, leaders and delegates from 196 countries convened for the 26th Conference of Parties (COP26) in Glasgow. They tried to hammer out a decisive solution to climate change, as protestors demanding action flooded the city’s streets. For the first time since the historic 2015 Paris Agreement, signatory countries—which again include the U.S. under President Biden—presented updated plans for limiting global heating to less than 1.5 degrees Centigrade compared to preindustrial levels. Staying under the limit requires cutting global annual greenhouse-gas (GHG) emissions almost in half by 2030. Yet, by the end of the conference, no major economy had committed to measures that could satisfy that target.

And even if all current pledges are met, the world is now on track for a calamitous 2.4 degrees Centigrade increase by the end of the century, according to analysis published during the talks, exposing billions more people to severe heatwaves, water shortages, hunger, and climate-driven migration, and possibly blowing past environmental tipping points. To “keep 1.5 alive”—the rallying cry at COP26—the summit’s most significant outcome was an agreement to present updated commitments in one year, instead of the originally planned five, and a requirement that those new measures comply with the 1.5 limit.

The built environment, which accounts for 37 percent of global emissions, figured in the climate action plans (known as nationally determined commitments, or NDCs) of 136 of the countries at COP, up from 88 in 2015. “Building energy efficiency is becoming more prominent in NDCs, and we salute that,” said Inge Andersen, undersecretary general of the UN and executive director of its environment program, “but progress is too little, too slow. We need to move from these incremental changes to real sector transformation.”

During the summit, building-sector representatives reinforced that message, in person and virtually, in talks and exhibitions, and in a series of events that formed a Cities, Regions, and Built Environment Day. (record attended COP virtually.) Notably, more than 70 of the largest architecture, engineering, planning, and construction firms, collectively responsible for over $300 billion in projects annually, along with two dozen industry organizations, issued the 1.5°C COP Communiqué challenging governments to step up their built-environment targets.

“We have 10 years to get to a 50-to-65 percent reduction, and 10 more to get to zero,” said Edward Mazria, CEO and cofounder of Architecture 2030, an advocacy nonprofit, in a prerecorded talk that formed part of a session about the communiqué. Speakers included representatives from the American, British, and Australian institutes of architects, the International Federation of Landscape Architects, and ASHRAE. The document’s guiding principles prescribe zero-carbon operations for all new buildings, effective immediately. (This entails electrifying operations, generating renewable energy on-site where possible, and using off-site renewables for the rest.) Also required are a 50 percent reduction in steel and concrete GHG emissions by 2025, zero steel and concrete emissions by 2030, and zero embodied carbon for new construction by 2040. For existing buildings, about 5 percent of them (the big ones) are responsible for half of urban-building operating emissions, so the call is for these to achieve zero-carbon operations by 2030, with the remainder to follow by 2040. “Our sector came together and aligned on industry-wide reduction targets, and that has not been the case until now,” Mazria told record. “COP catalyzed that.”

Demonstrating some of the myriad practical and proven solutions for achieving these targets, the Build Better Now Virtual Pavilion, hosted by a coalition of over 100 partners, showcased exemplary built projects. Among them: the retrofit of a favela in São Paulo; a large-scale Passivhaus university building, constructed on a conventional budget, in Melbourne, Australia; a modular, adaptable, and ultimately demountable cross-laminated timber bridge for a highway in Amsterdam; and projects prioritizing biodiversity protection and ultra-low-carbon construction. 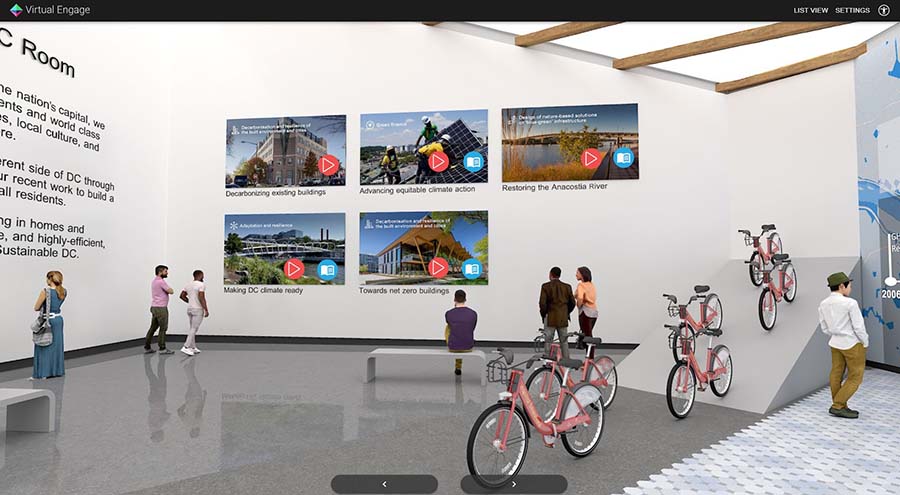 A virtual and physical exhibit, organized by C40 Cities and Arup, highlighted solutions from 11 municipalities around the globe, including Washington, D.C. Image courtesy Arup, click to enlarge.

A virtual and physical exhibit space organized by C40 Cities (an international network of mayors tackling the climate crisis) and Arup highlighted solutions from 11 municipalities around the globe that address decarbonization and adaptation, sustainable mobility, nature-based infrastructure, green finance, and accelerated energy transition. In a live presentation, architects from SOM unveiled a concept, called Urban Sequoia, for buildings of all sizes and types to function as forests—absorbing rather than emitting carbon—using a range of existing and emerging technologies. SOM projects that its prototype design for a high-rise would sequester as much as 1,000 tons of carbon per year, equivalent to 48,500 trees. 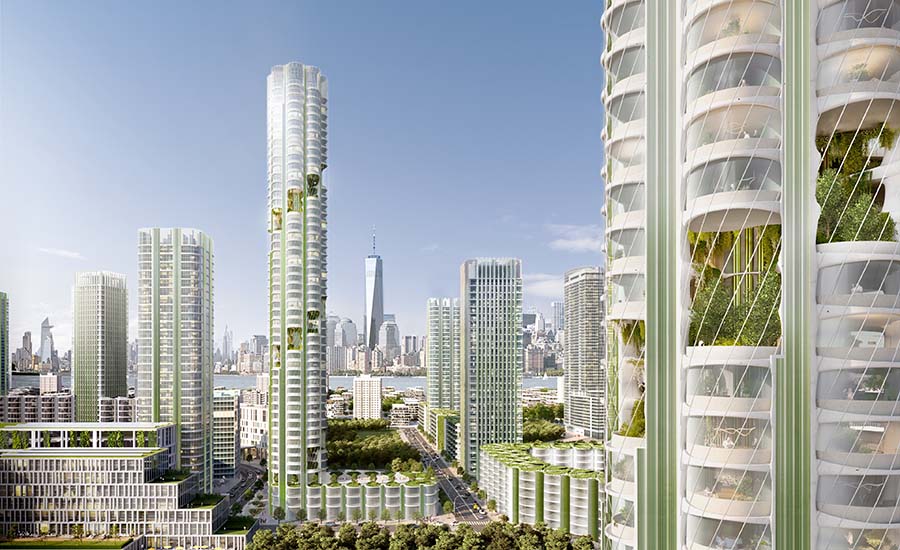 At COP, SOM presented a concept for buildings that would absorb, rather than emit, carbon. Image courtesy SOM

Essential to scaling up solutions for decarbonizing the built environment and adapting to climate change are energy and building codes. Eighty-two percent of global-population growth projected by 2030 is expected to occur in countries without mandatory energy codes, mainly in the Global South, and only 20 percent of countries whose NDCs identify building-emissions reductions as a priority include energy codes as a strategy. Meanwhile, new construction around the world is adding the equivalent of Paris to the planet every week. Speaking at COP, Ryan Colker, the International Code Council’s vice president of innovation, called on all governments to adopt and enforce building codes aligned with domestic and international goals.

Throughout the conference’s built-environment events, two themes recurred. Success in reducing emissions and increasing resilience requires the fragmented AEC industry to collaborate in new ways. And success requires decision-makers at all levels, in public and private sectors, to prioritize equity for society’s most vulnerable members. (One of the most bitterly contested issues at COP26 was funding for poorer nations to adapt to the disproportionate climate impacts they face.)

Although COP26 fell far short of what’s needed, the event attracted a level of public attention that was unprecedented for a climate conference. The year ahead provides a chance to build on the momentum and to maintain pressure on leaders to come back with more effective measures. For the built-environment sector in particular, the year offers a narrow but crucial window to demonstrate to national governments that the know-how for bringing the sector’s emissions to zero already exists—practical and proven—and that a zero-emissions built environment is a critical climate solution.