“We were trying as much as possible not to imitate a church,” says Benedetta Tagliabue of Barcelona-based office Miralles Tagliabue EMBT. “That’s why I thought we’d never win the competition.” Commissioned by the Conferenza Episcopale Italiana, Italy’s assembly of bishops, EMBT’s church of San Giacomo Apostolo was built to serve a growing congregation on the outskirts of Ferrara. On an empty poplar-lined site that offered few cues, entrants were asked to design a building for 300 parishioners along with a house for the priest and a parish hall. 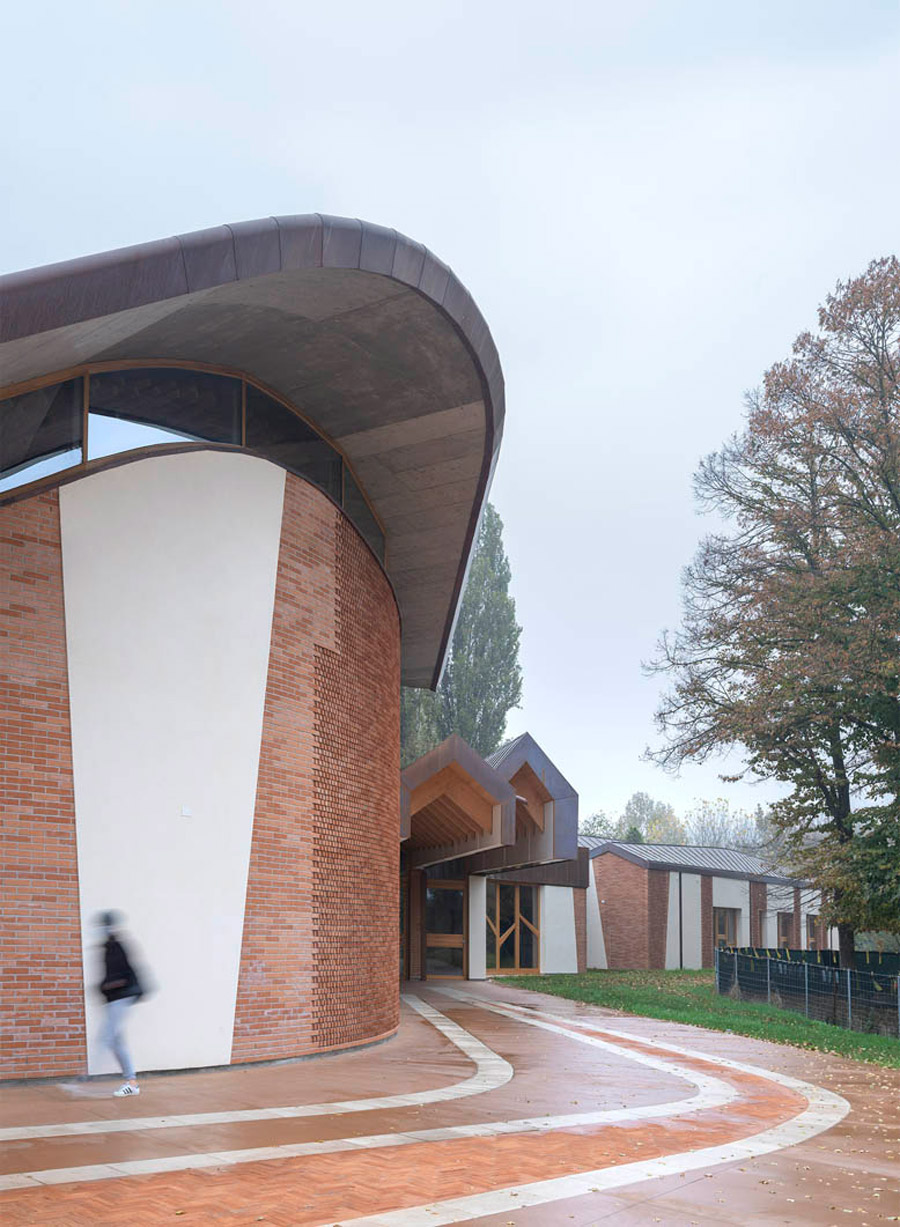 Due to earthquakes in the Emilia-Romagna region around the time of the competition, EMBT opted to eschew traditional church typologies, with their emphasis on masonry tectonics, and instead build a light structure with an undulating wood roof (a concept not unlike their famed 2004 reworking of Barcelona’s Santa Caterina market). Inspired by Ferrara’s annual hot-air-balloon festival, Tagliabue imagined the roof as being like an aerostat slowly collapsing onto the ground and covering everything beneath it: the amorphously semicircular church proper (whose east-facing high altar stands at the complex’s epicenter), the priest’s house behind (with its facades that flow seamlessly into the church’s elevations), and, to the south, “like the tail of a comet,” the parish hall and its attendant spaces. “We were trying to be light not only in structure but also in our references,” continues Tagliabue. “In Italy, history is so strong it can kill you.” 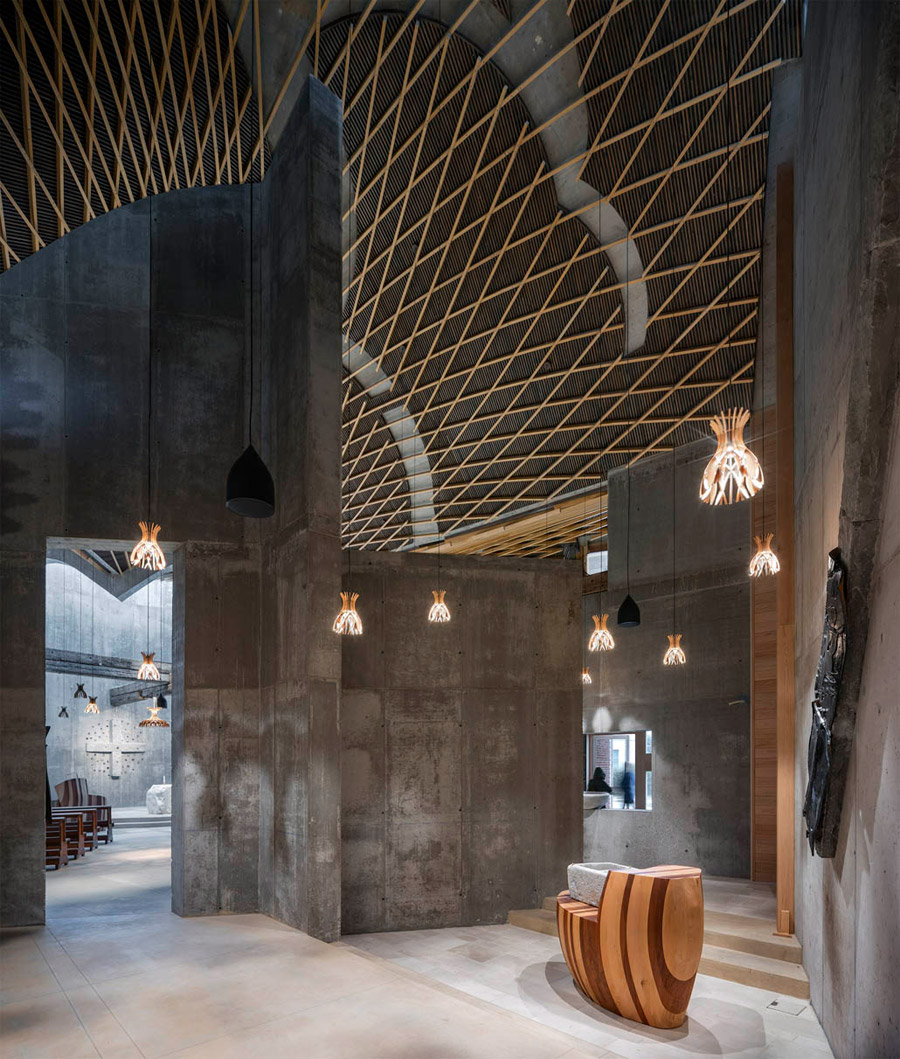 A classic basilica it is not, but San Giacomo nonetheless evokes familiar church forms. Its roof—realized as a thin concrete shell after timber turned out to be too expensive—clearly recalls Gothic vaulting, especially since it is suspended above a clerestory that runs all along the top of the building’s undulating concrete walls (the roof floats on steel struts that are dissimulated among the clerestory’s glazing bars). Daylight consequently floods in from above in a way that is typical of church architecture, while the raw concrete of the building’s interior is plainly reminiscent of ecclesiastical buildings in stone. With no windows cut through its walls, San Giacomo encourages visitors to raise their heads toward heaven, especially at the main altar, which sits on a dais underneath a high central oculus. Looking up, they will see a giant wooden cross spanning the void, its arms made from old timbers rescued from Ferrara’s town hall, planted firmly into the concrete to become one with the architecture—where the classic basilica inscribes itself within a cross plan, San Giacomo embeds the cross into its very fabric. This is not the only reference to old Ferrara, the church’s exterior being clad in stripes of typical Ferraran brick and render (with the bricks, moreover, featuring a specially designed saw-tooth face intended to evoke the town’s 15th-century Palazzo dei Diamanti, famed for its facetted bossage). 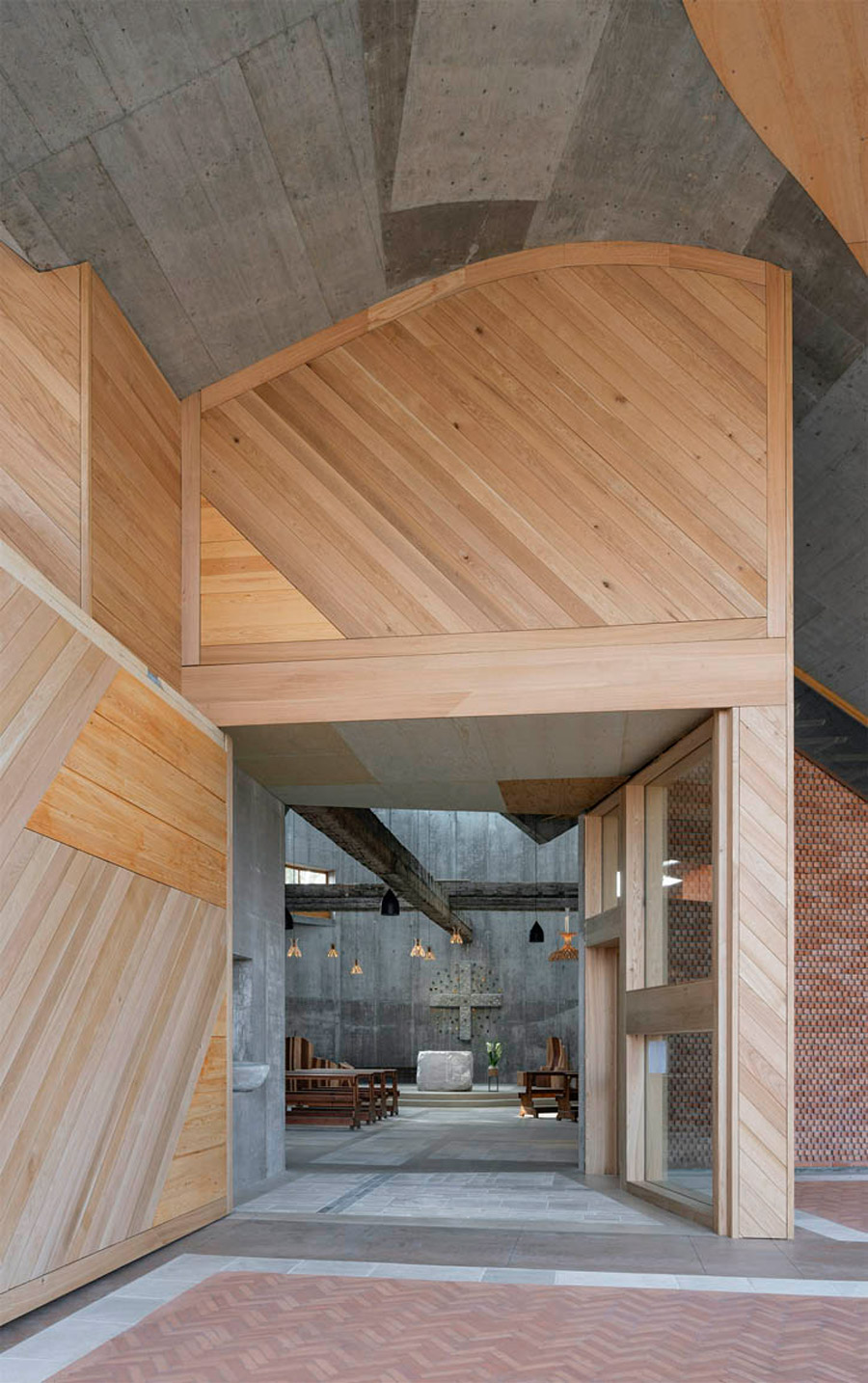 The devil is in the details, they say, and EMBT has endeavored to chase him away by designing absolutely everything, from the high altar (a block of white stone from Trani, polished on top but otherwise left as hewn from the quarry) to the ambo, sedile, and other furnishings, carved from striped laminated wood. Those they didn’t design they chose, such as the 14th-century statue of the Virgin and Child or the artwork, commissioned from the artist Enzo Cucchi whom EMBT asked to join them in the competition—stone crosses, ceramic cabochon jewels, images in black ceramic like oozing basalt. Not quite complete (money has yet to be found for the EMBT-designed pews and confessionals), the resulting Gesamtkunstwerk is all the more remarkable given the low budget of $5 million.