Where the corners of a new public school building in West Philadelphia form knuckles in plan, angular stairways topped by clerestories reconcile the skewed U-shaped geometry imposed by the site, creating diagonal vistas, intriguing views, and diverse spaces illuminated by an abundance of ever-changing daylight. Reconciliation, in fact, could be the theme of this 87,000-square-foot structure, hosting two schools, designed by the New York firm Rogers Partners Architects+Urban Designers. Programmatically, the corner joints reconcile the distinctive pedagogies of the Samuel Powel Elementary School and the Science Leadership Academy, a middle school, each of which occupies its own floor, serving a total of 746 pupils. The relatively small scale of the building draws the fine 19th-century row-house grain of the adjacent Powelton Village neighborhood into a large new commercial and academic development rising around the school, undertaken by the real-estate developer Wexford Science & Technology in partnership with Drexel University, the landowner and sponsor of the school. 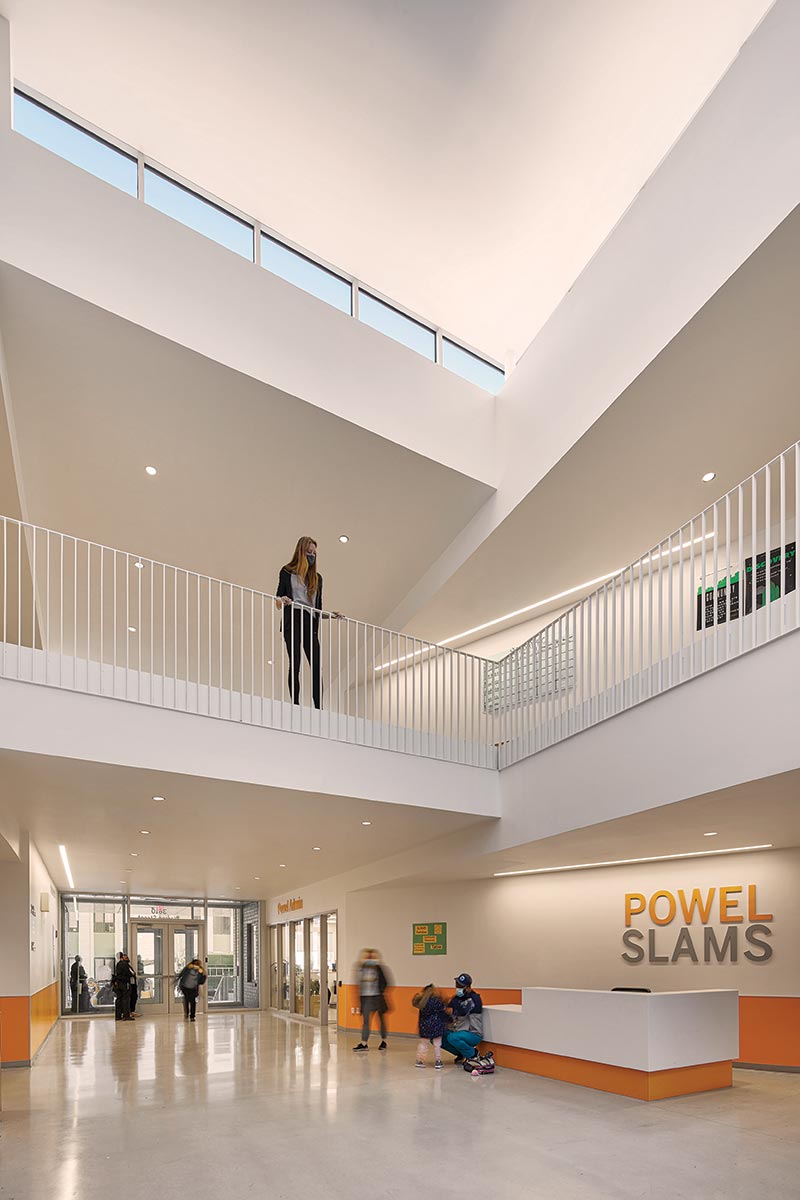 The building layout is deceptively straightforward: the wings bookend a two-story classroom bar. One wing culminates in a double-height cafetorium (a term denoting both lunchroom and auditorium), the other a gym. Both dining and sports halls are largely glazed in translucent polycarbonate that diffuses daylight and shares their activities with passersby. The wings also enclose a playground with a landscaped mound, framed by wood bleachers, as a soft divider between play spaces for the lower and upper schools.

Add the differing pedagogic approaches of the two schools, and the design becomes more intricate. The K-4 Powel elementary school, which moved to the ground floor from a long-overcrowded building nearby, teaches in a traditional, rigorous, even regimented style. “They line up to move from place to place, for example, and we needed to make room for that,” says Elizabeth Stoel, the Rogers associate partner who directed the project. 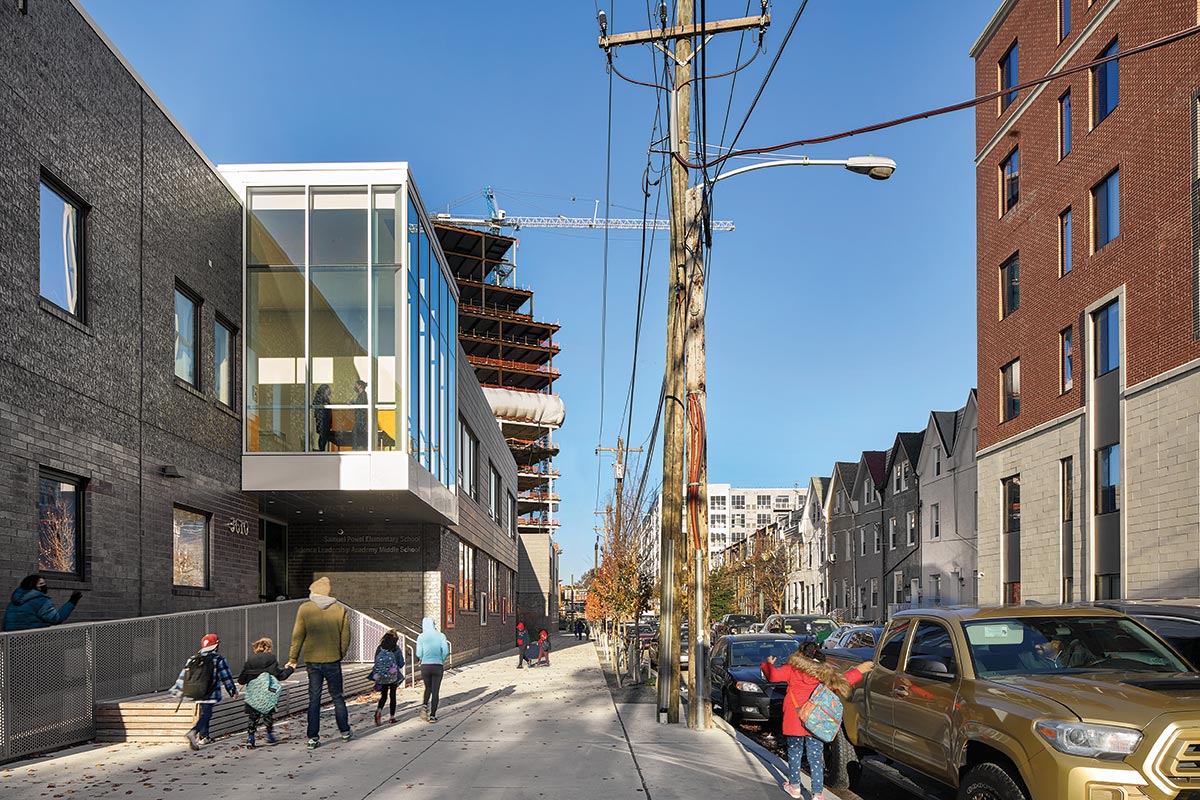 The school buffers a low-rise residential area from the towers being built to its south and west (1). At its rear, a playground (2) is flanked by a polycarbonate-clad gym (3) and cafetorium. Photos © Matt Wargo 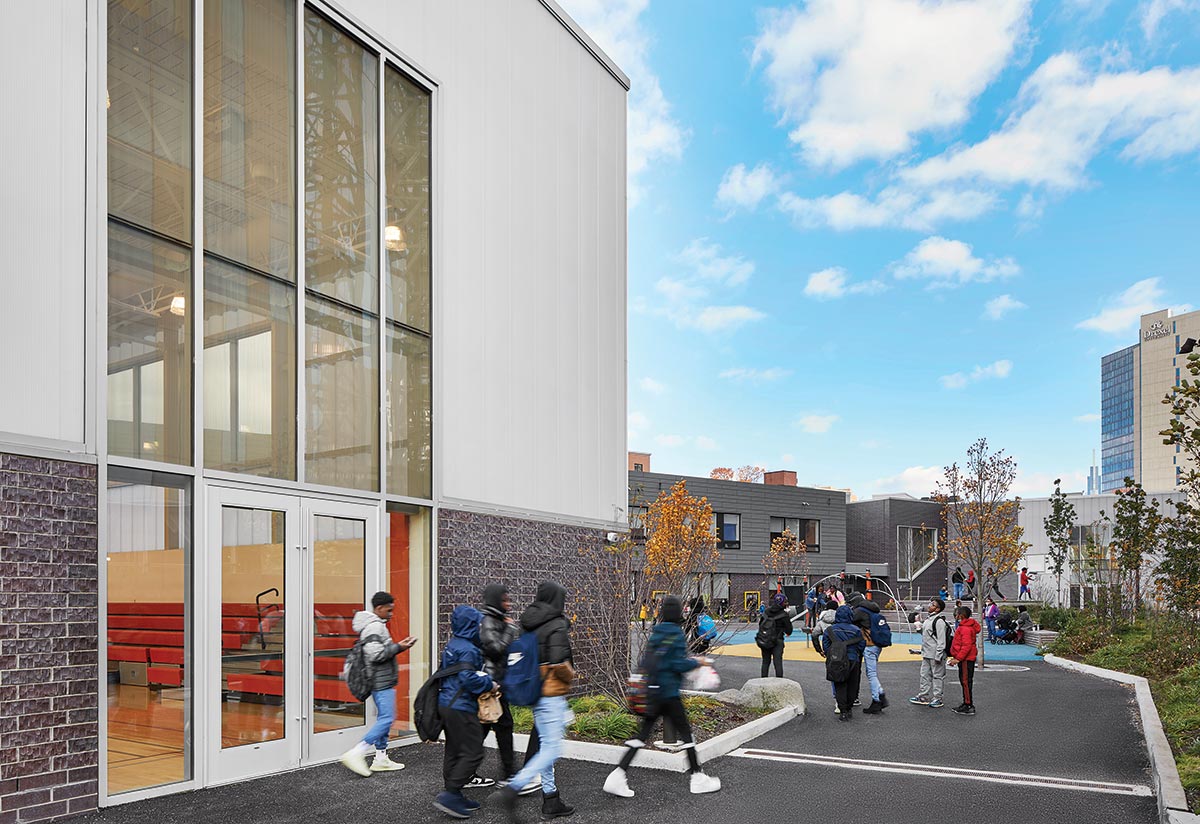 By contrast, the School District of Philadelphia’s model for the Science Leadership Academy Middle School (known as SLAMS) on the upper floor, emphasizes science and engineering. Aimed at grades 5 through 8, the school’s curriculum is project-based; its wide hallway and expansive square footage at the circulation “knuckles” allow students to spill out of classrooms to work in groups. “SLAMS invites occupancy of all these spaces,” says partner Rob Rogers. They “break down the idea that the classroom is the only place where learning happens.” Science labs open off these collaborative areas, as does a library and a makerspace used by both schools. (Music rooms in Powel are also shared.) Both schools host a variety of classroom sizes, from conventional rooms serving a couple of dozen students to smaller ones for children with special needs and small-group work. All are light-filled, thanks to oversize windows. To retain their separate identities, each institution has its own entrance facing the playground.

“We were able to introduce this generosity of space and light on a tight construction budget,” explains Rogers. The $33 million steel-framed building has concrete-plank floors, polished on top and left raw on the underside in classrooms to allow for 12-foot-high ceilings.

For all the attention to programmatic needs, the design is also sensitive to its fast-changing surroundings. The Powel/SLAMS 1.8-acre parcel is at the northern edge of the 14-acre, innovation-focused redevelopment being built by the Wexford/Drexel collaboration. Called uCity Square, it is located west of the university’s campus, north of the University of Pennsylvania, and east of a major hospital complex. 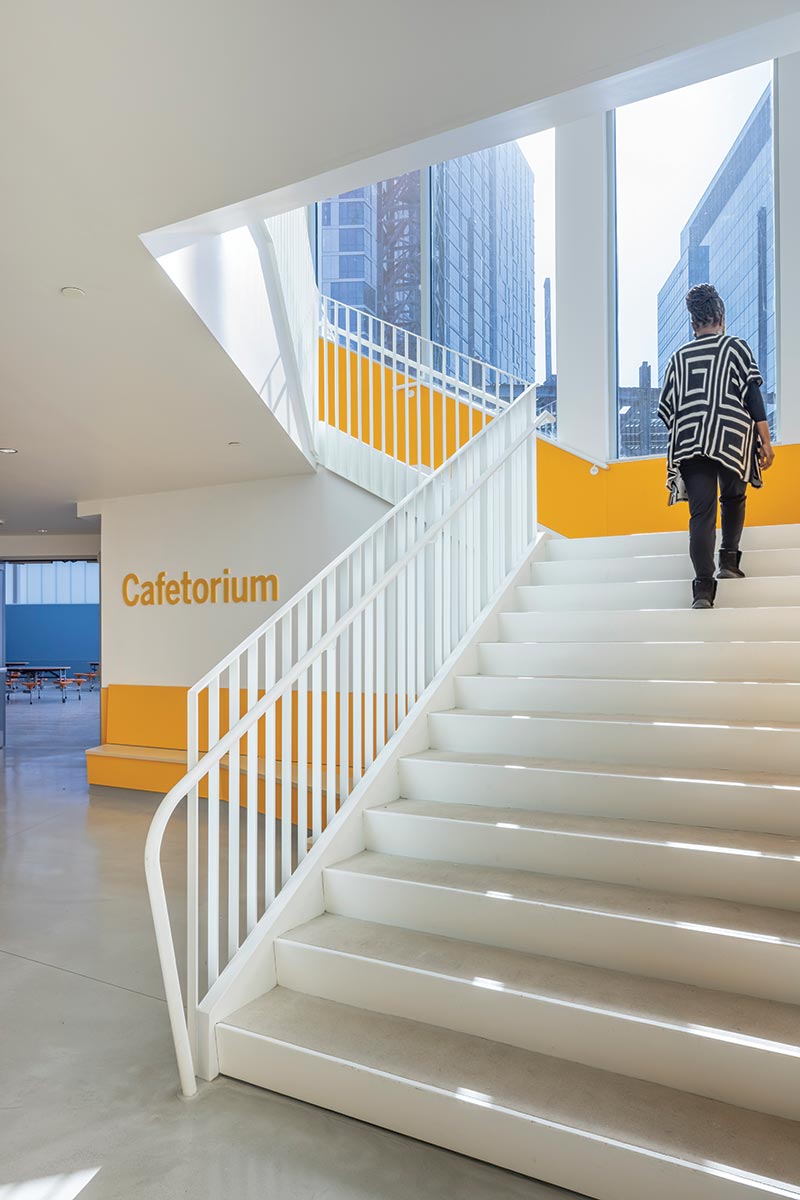 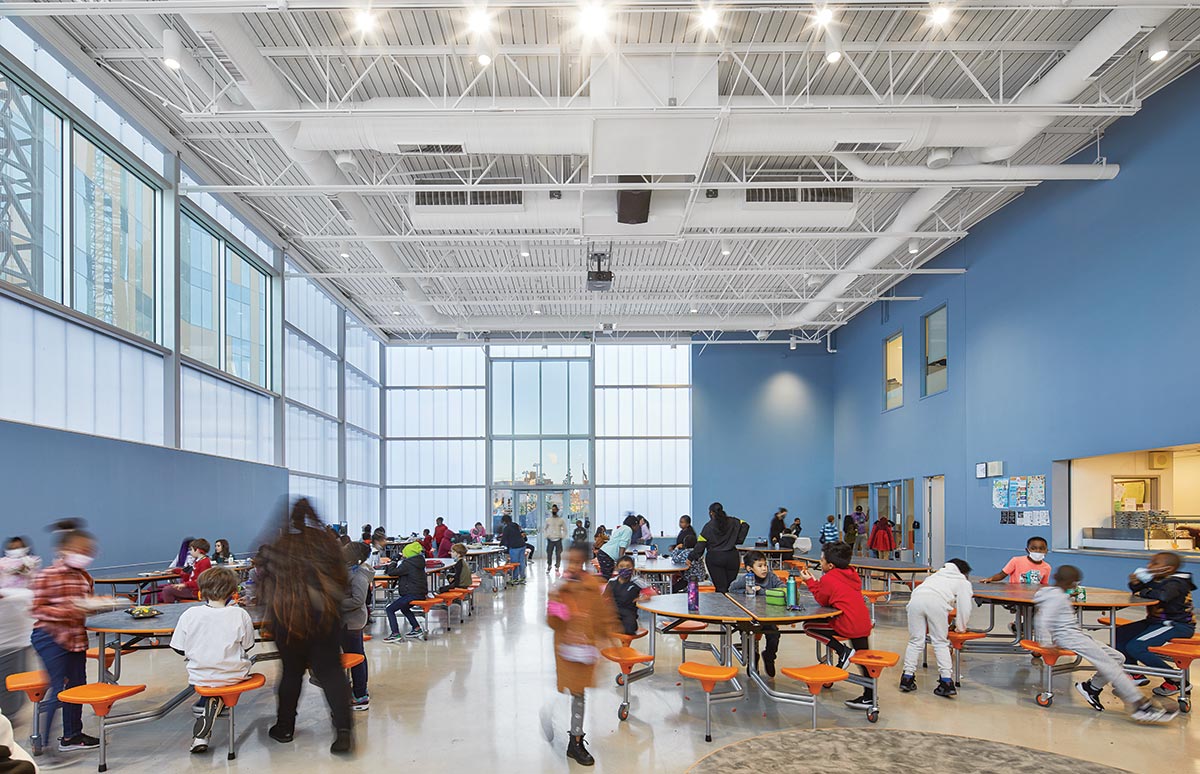 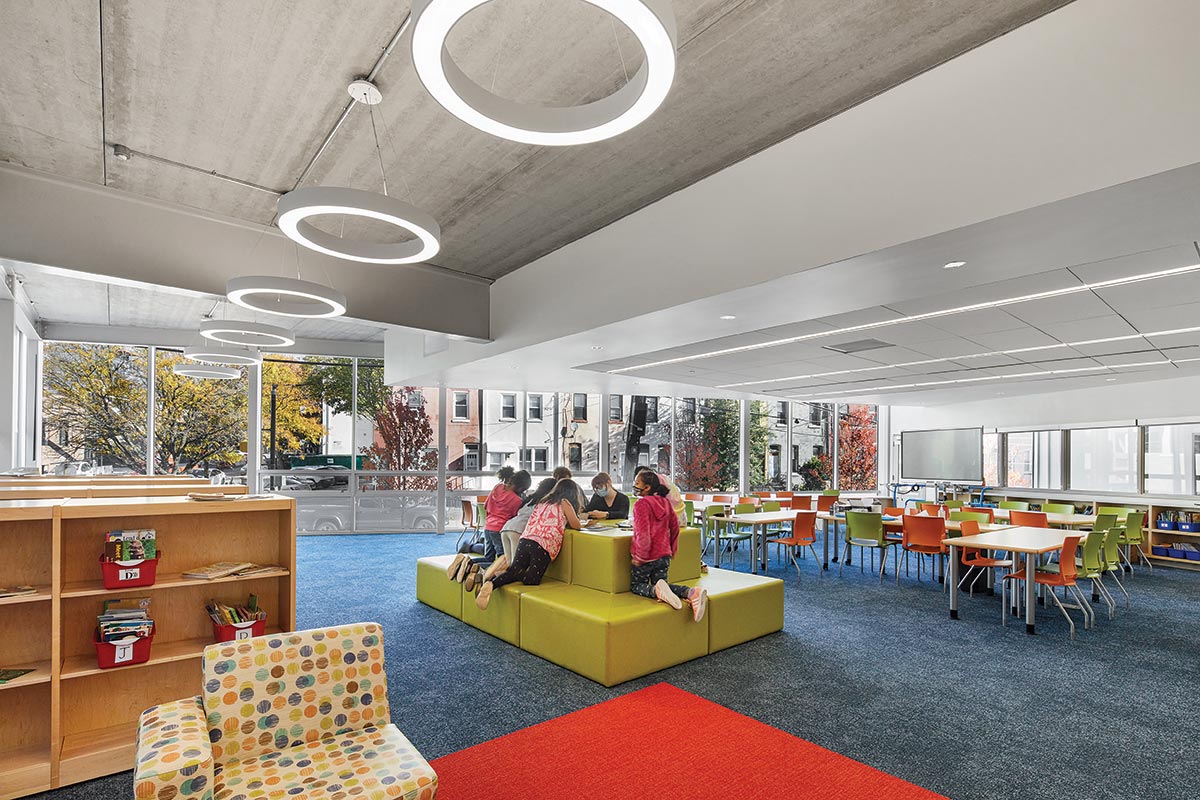 A stair (4) leads from the first-floor Powel block and such shared facilities as the cafetorium (5), gym, and library (6), up to the SLAMS area and makerspace, also shared (7). Photos © albert vecerka (4), Matt Wargo (5-7) 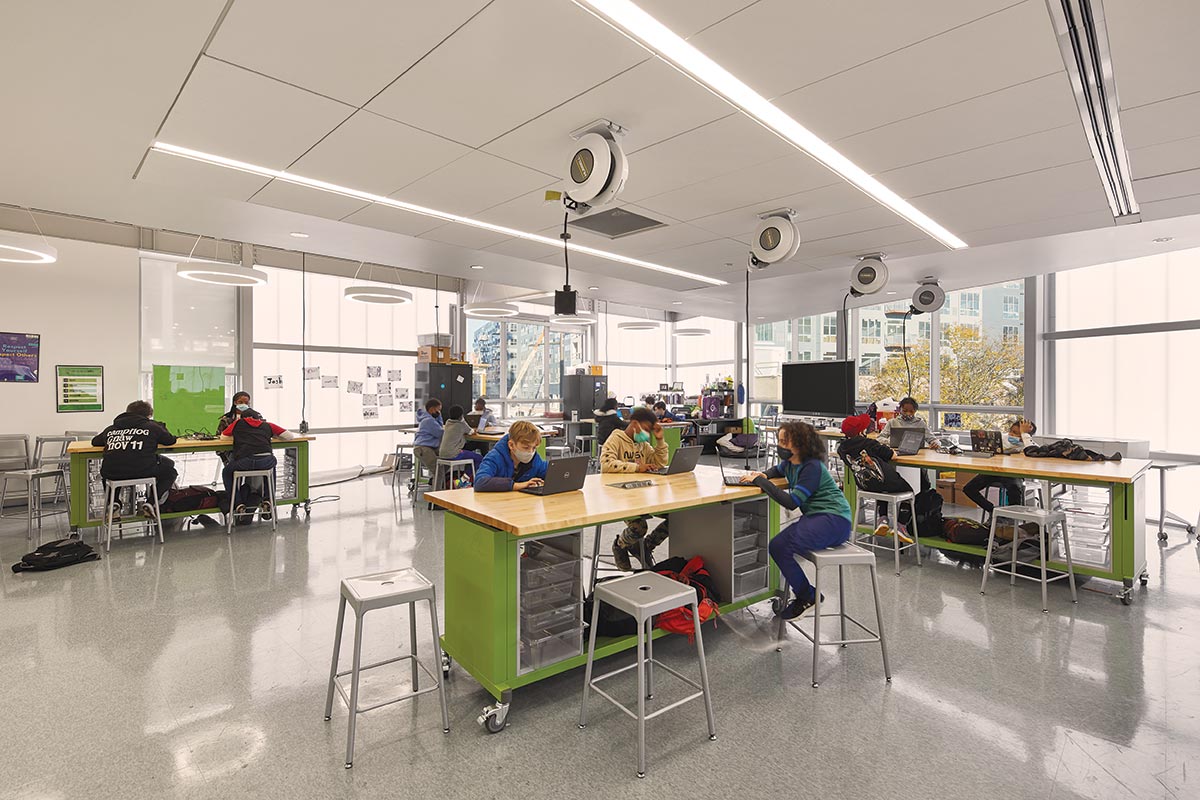 Wexford plans an 8 million-square-foot mix of speculative life-sciences labs and offices aimed at businesses connected to university research (at both Penn and Drexel), along with multifamily housing and retail. Construction is proceeding at a torrid pace, with 1.3 million square feet of commercial, academic, and residential space rising around the school. This includes a looming 14-story health-sciences building for Drexel, with a busy pattern of glass and sallow yellow metal panels, across a narrow alley from the school. The alley will be landscaped to create an appealing pedestrian path through the block, though the tower, regrettably, blocks essential winter daylight from reaching the playground.

After a community-consultation process, Drexel agreed to sponsor the construction of the school building and brokered the marriage of Powel and SLAMS with the School District of Philadelphia as a benefit to neighbors concerned about the scale of development. The university, especially through its School of Education, has long worked with Powel at its previous location. Today it supports teachers in the new schools, brings in its students as tutors, and provides enrichment at SLAMS by offering a wide variety of mini-courses.

The intention to build a school that would ostensibly benefit from proximity to universities and R&D spinoffs unfortunately echoes the woeful creation in the 1970s of University City, an urban-renewal scheme encompassing a large area adjacent to the two campuses that obliterated a longstanding African-American community. The University City district still exists, but it grew much more slowly than anticipated, leaving empty land and parking lots. The Wexford/Drexel parcel had once hosted the University City High School, built in 1972 with high aspirations for teaching-excellence and collaboration. The school floundered, however, and was demolished to make way for the current development. With its buildings cheek by jowl, the commercial and higher-education buildings benefit from the light, air, and open space provided by the Powell/SLAMS school. There is no reason that University City’s history must repeat itself and every reason that the stakeholders involved must ensure that promises made to local students and families are kept. 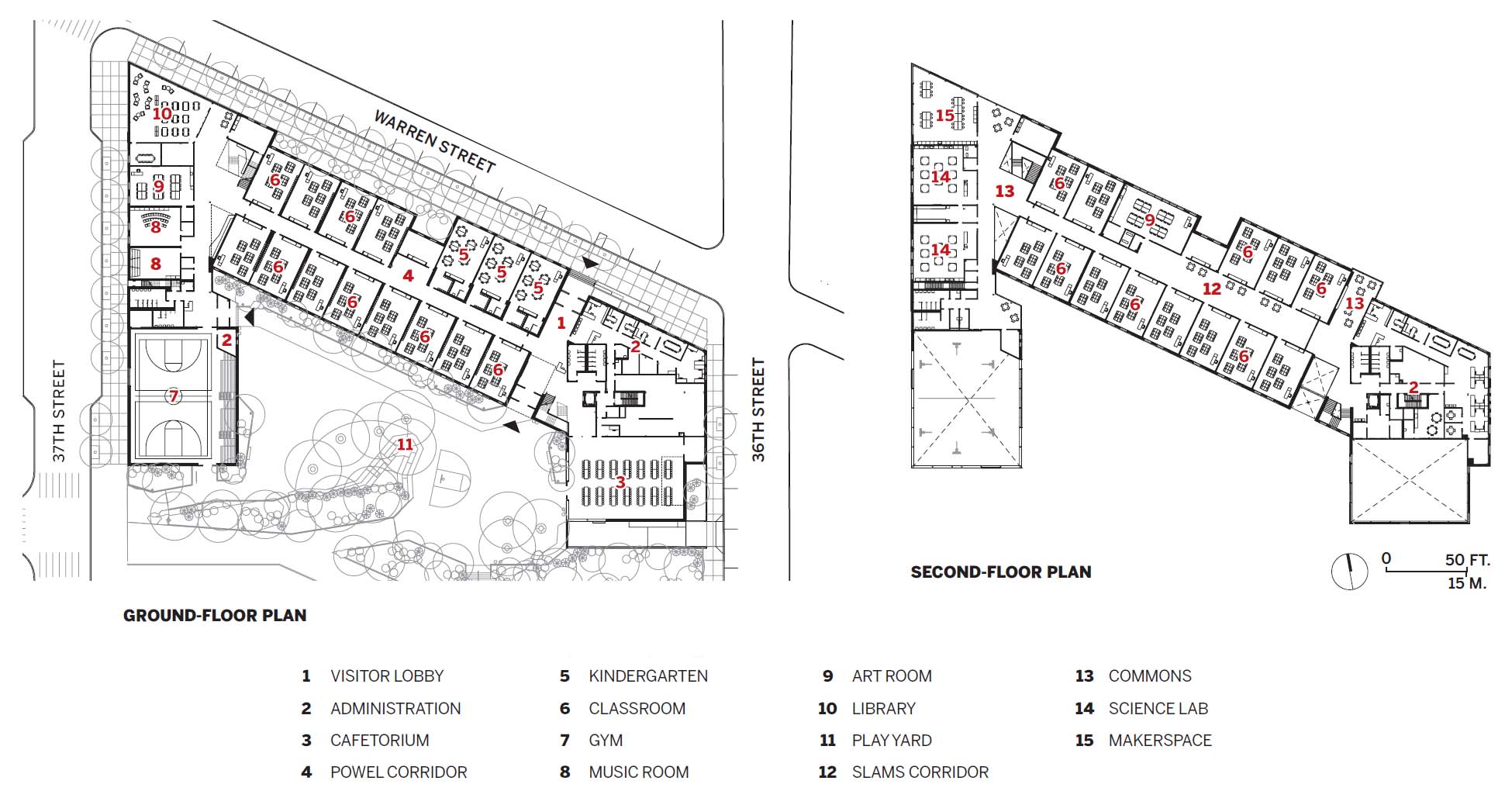 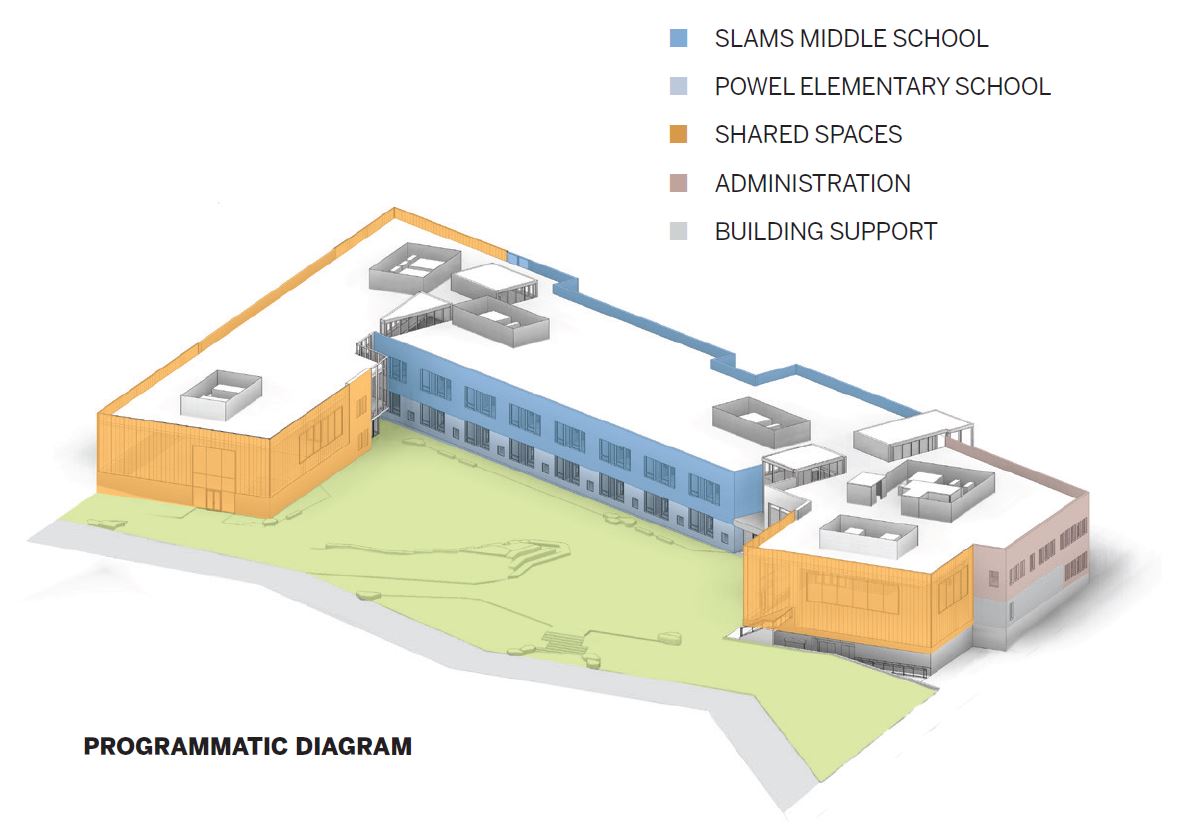