“Producing a winning competition entry is one thing, but building it is another,” says Nanako Umemoto. In 2009, the New York firm she founded with her husband, Jesse Reiser, in 1986, was invited to enter a competition for what was then called the Taiwan Pop Music Center. Since the turn of the century, Taiwan had been losing dominance in pop music to Japan and Korea, and its government wanted to create a place, according to the competition brief, “to gather creative talents, trends, and brands.”

Perhaps with the youthful audience for pop music in mind, Taipei’s department of cultural affairs bypassed late-career architects for the invited competition in favor of a younger generation that included Jeanne Gang, Julien de Smedt, and Reiser+Umemoto (R+U).

Working with Taiwan’s Fei and Cheng Associates, R+U won the competition, but that was only the start of a 10-year saga, during which the client, program, and even the project name changed: the word “pop” was dropped to broaden the center’s appeal before an appearance by Yo-Yo Ma. Despite the collaboration with the local architects, Reiser and Umemoto kept firmly involved in steering the 755,000-square-foot project toward completion, producing many of the working drawings in their New York office. “It’s not as if we handed it off at any point,” says Reiser. 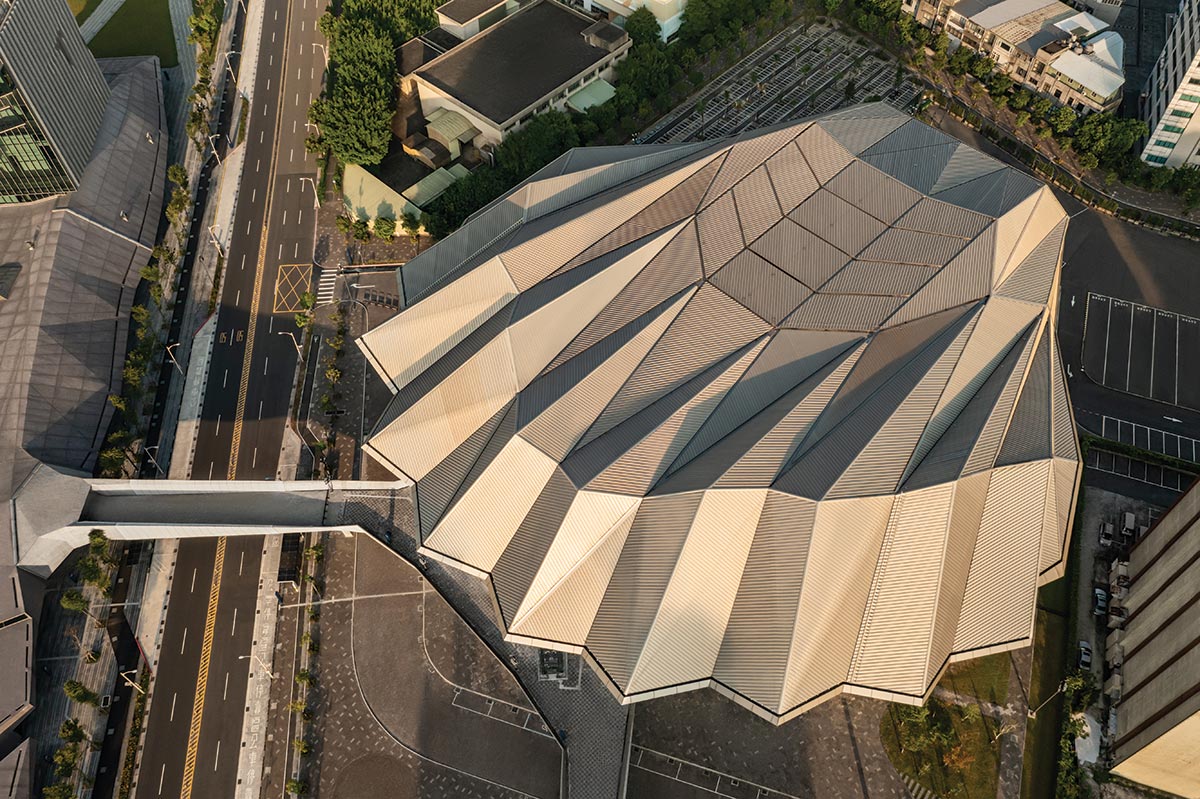 The clamshell-shaped performance hall is linked to the music museum and industrial shell via a pedestrian bridge (above and top). Photo © Yana Zhezhela & Alek Vatagin

Because of the pandemic, the architects haven’t been to the site in more than two years, but they are enjoying having completed the biggest project of their careers, by far. “Not many firms our size get a chance to do something like this,” says Reiser (their office, in a former factory in Harlem, has fewer than a dozen people).

The reason they won the competition, Reiser and Umemoto believe, is that they took maximum advantage of the 23-acre site. Their competitors, they say, were doing “miniature urbanism” within a single building. “We decided, with all this space, why not do real urbanism?” Reiser says. 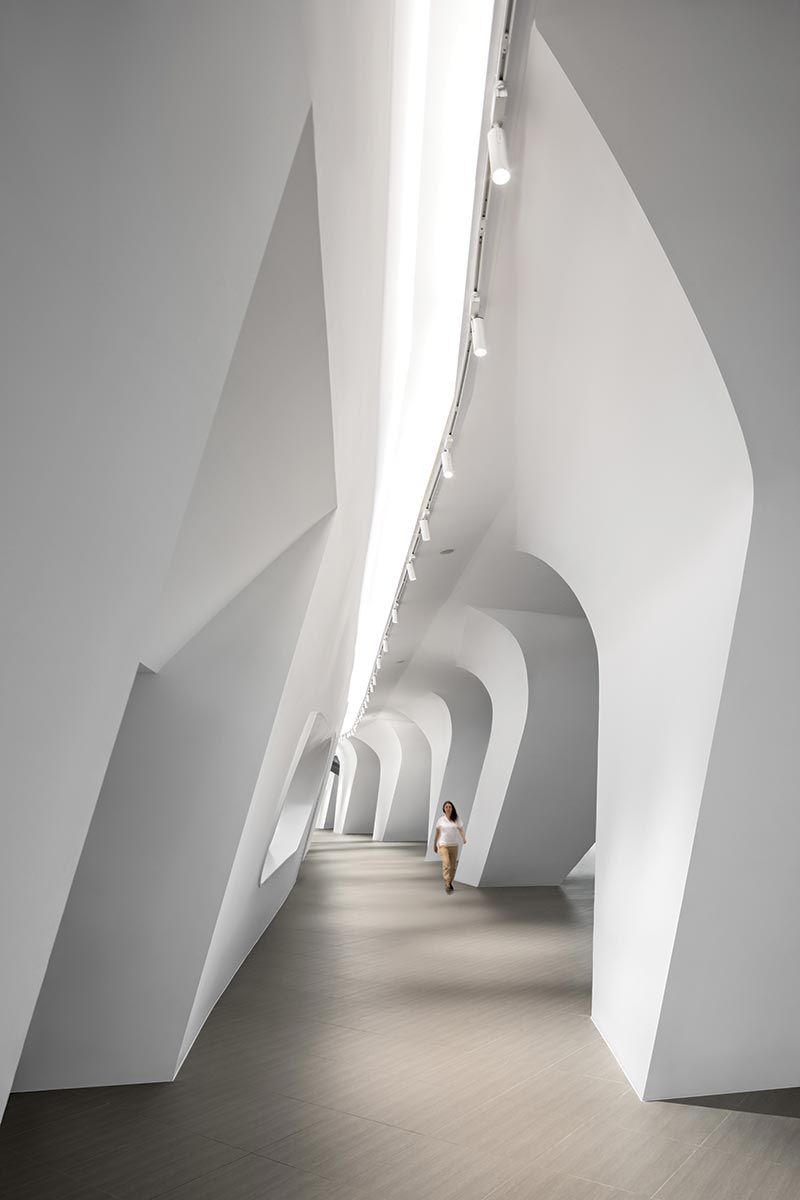 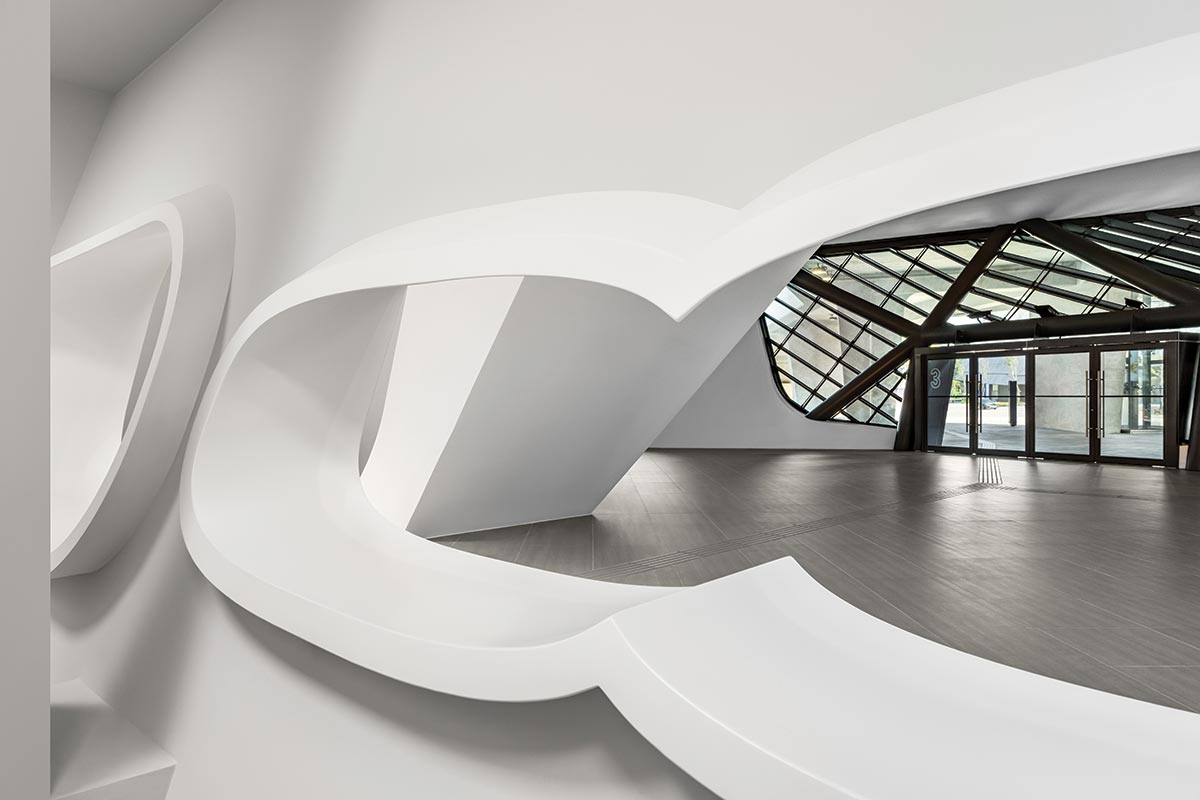 Public areas are painted white, and contrast with the black armature at entrances and windows (1 & 2). Photos © Yana Zhezhela & Alek Vatagin

“All this space” consists of two parcels separated by a highway—the program called for a pedestrian bridge connecting them. Reiser and Umemoto placed the center’s largest space, the 5,000-seat performance hall, on the hexagonal parcel, where it could be entered at grade or, one story up, directly from the bridge. The clamshell-shaped venue has a pleated roof, reminiscent of origami, but with softer folds. “We wanted it to hover between being organic and being crystalline,” says Reiser. The roof’s steel decking is covered in Alumite, an anodized aluminum that gives it a golden cast. The hall itself is a crystalline box covered in gypsum board, which sits inside the larger steel frame of the building. Pleating the auditorium walls, for acoustical purposes, extended the origami theme into the fan-shaped room. The expansive lobby is a tour de force. Glass introduced between steel structural members creates angled windows, their black frames contrasting sharply with the white walls enclosing the auditorium. One prominent opening in those walls, for the ticket booth, was designed by Umemoto in the shape of a baby’s mouth, she says, “because most ticket booths are boring.” Elsewhere in the public spaces, the white walls curve or cant at angles. 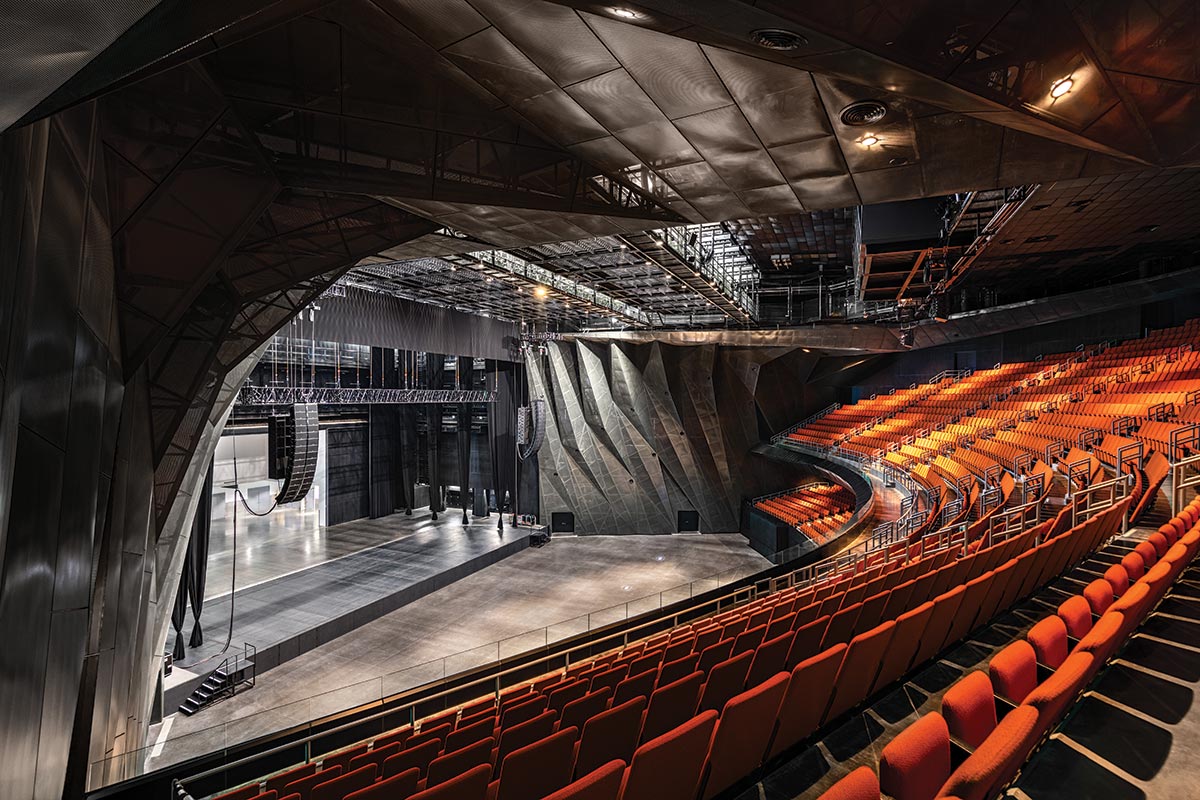 Pleats inside the theater (3) mimic its facade, while canted walls animate the public spaces (4). Photos courtesy Reiser+Umemoto and Fei and Cheng Associates 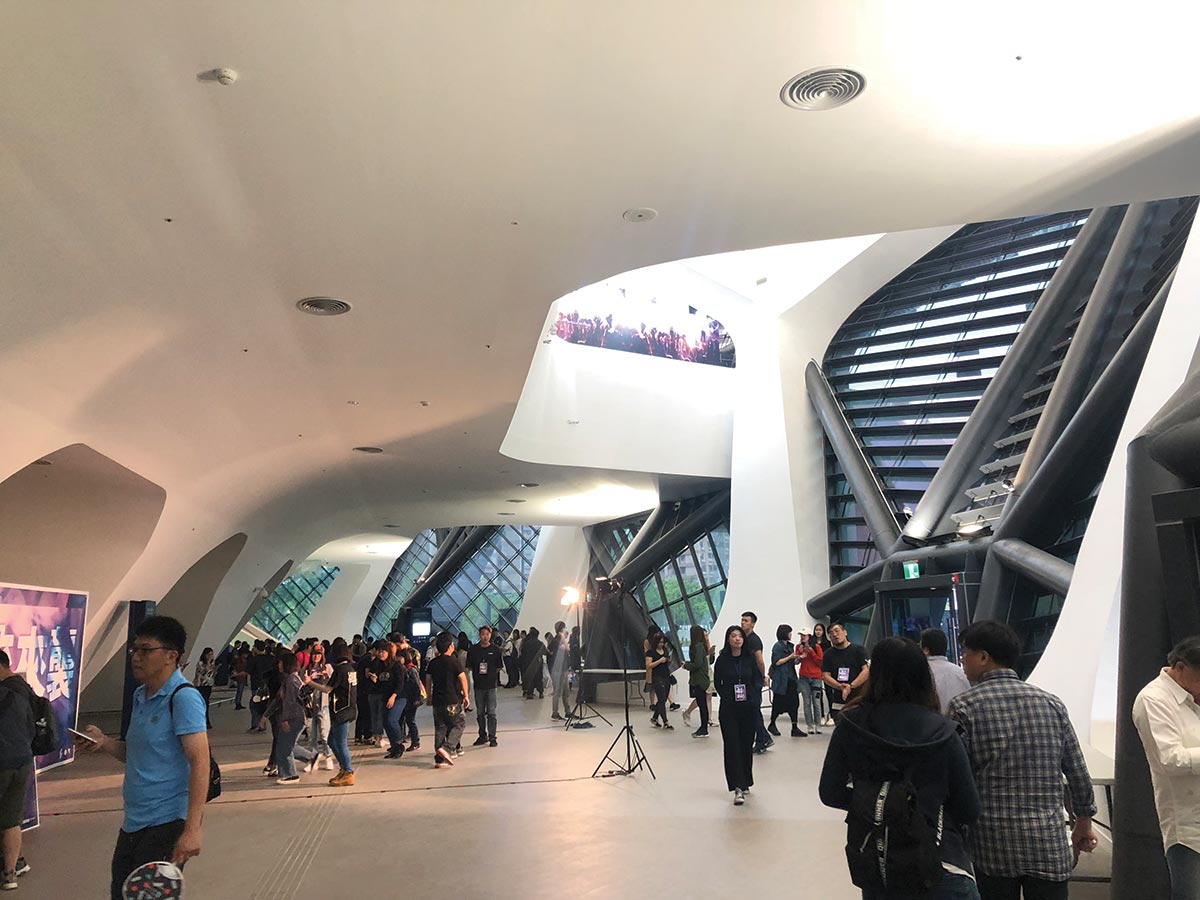 Across the bridge, on the narrow southern parcel, Umemoto, who studied landscape architecture and urban design in her native Japan before moving to the U.S., helped create a plinth that reads as topography. The plinth surrounds a grade-level outdoor performance space. The firm designed several coverings for the performance space, in deference to local noise laws, but the client, Reiser says, chose not to build them and suffer the consequences. By day, the performance space serves as a public plaza; it is ringed by stores and restaurants, in an arrangement the architects compare to Rome’s Piazza Navona. 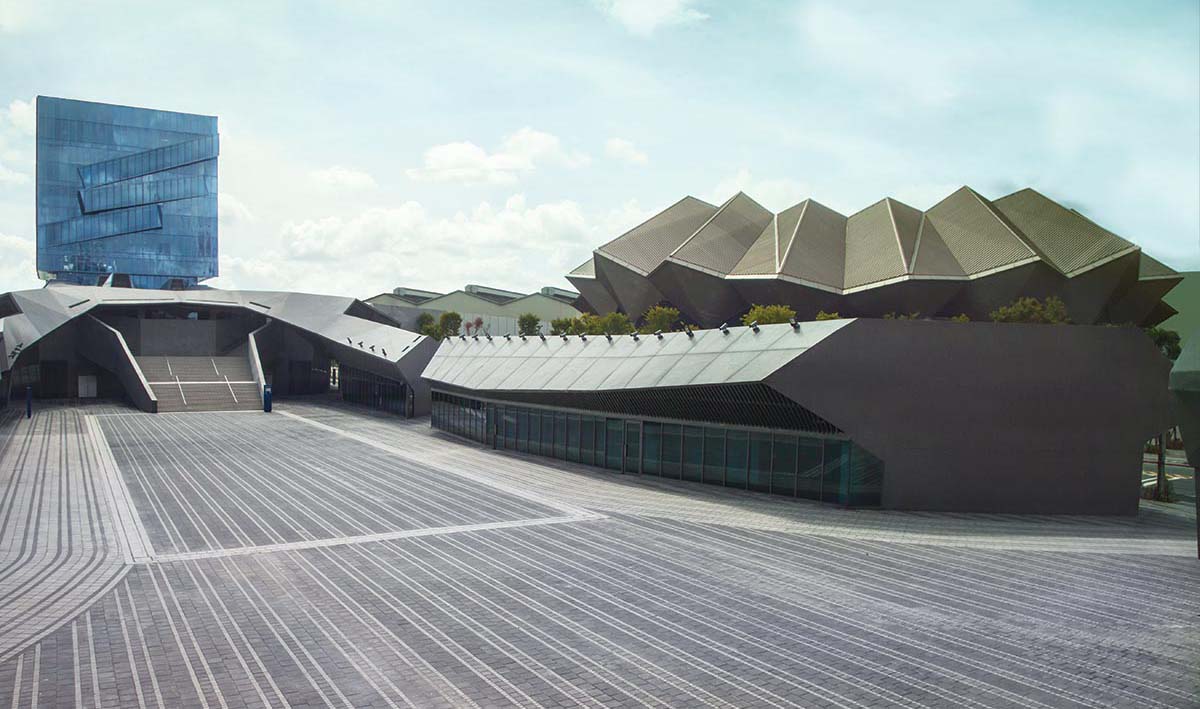 A paved plaza extends from beneath the plinth of the cubic cultural hall. Photo © Yana Zhezhela & Alek Vatagin

Rising over the west end of the plinth is a cubic building containing a music museum, its glass-enclosed internal stairways pushed outside the east elevation (Reiser and Umemoto designed the stairways but were not otherwise involved in that building’s interiors). At the east end of the plaza is another structure, shaped like a meteor, called the “industry shell,” which contains offices and recording studios. “It’s a machine for rolling out new musicians and groups,” says R+U associate Jasmine Lee. A recess beneath the plinth contains a stage and backstage areas.

Seen from above, the industry shell—a concrete enclosure topped by about an acre of perforated stainless-steel panels—resembles a kind of abstract painting, with darker and lighter patches following no discernible pattern. According to the architects, the surface was meant to have a uniform appearance, but the contractor oriented some of the hundreds of panels incorrectly. (The direction of the perforations determines how much light each panel reflects as the sun moves through the sky.) “I was shocked at first,” says Reiser of the 30,000-square-foot error, “but then I started to like it.”

Despite the building’s angular metallic facades, the architects reject comparisons between their work and that of Frank Gehry or Zaha Hadid. “We do share with them a desire to expand the sensual and emotive possibilities of architectural expression, but our way couldn’t be more different,” says Reiser. He sees Gehry as focused on particular formal outcomes. And the parametricism of Zaha Hadid Architects doesn’t appeal to the couple, who design with physical models. Hundreds of them, in a huge range of materials, fill their office. “We’re not so tied to a computational way of thinking,” says firm associate Julian Harake.

Of course, many of the firm’s choices are driven by aesthetics. “We wanted something that would be distinctive on the horizon and would resonate with the mountains in the background,” says Reiser. “And the program called for an ‘iconic’ building.” At the same time, the facades have few identifying features. “We were trying to eliminate easy reading of scale,” he adds, “and to achieve visual continuity over many acres.” In doing so, they created a tabula rasa on which the music industry can write its own story. Almost literally: at night, the entire complex serves as a screen for colorful projections, and the somewhat austere architecture pulses with life. “The years of drawing, model-making, and even site visits didn’t prepare us for the vast scale and energy of the project,” says Umemoto. “We created a city in the city.” 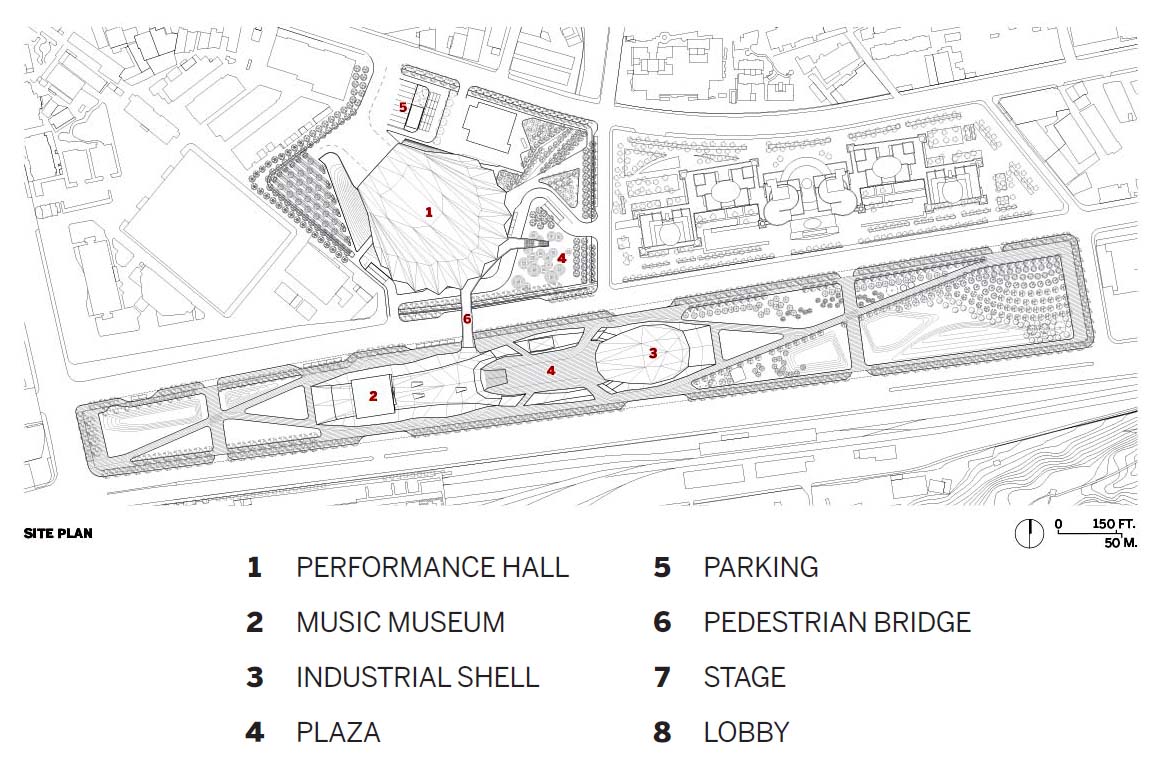