‘Houses of Tomorrow,’ on the first glass dwelling in the U.S., is on view at the Elmhurst Museum near Chicago through May 29

Chicago architect George Fred Keck (1895-1980) unlike many of his Modernist contemporaries, was a technocrat and tinkerer first and foremost. Long before the advent of solar panels, his solar homes sought to use new technology and materials to make architecture congruent with climate. His 12-sided House of Tomorrow, built in 1933 for the Century of Progress Exposition in Chicago was the first glass house, a work of solar architecture that can be seen as an origin point for our current understanding of passive solar design and sustainable energy efficiency–a lineage well told by Houses of Tomorrow: Solar Homes from Keck to Today at the Elmhurst Art Museum outside of Chicago (though May 29). Using photos, plans, and drawings, the exhibition concisely illustrates a hinge-point between design, technology, and science. But it shines most brilliantly when exploring the experiential aspects of Keck’s obsession with light and glass, bringing components from the original house into the gallery not as archaeological artifacts but to create a vivid narrative of what living in the House of Tomorrow might have felt like.

The House of Tomorrow was built around a spiral staircase and central utility core, with beams to support the roof and floorplate in a multi-directional cantilever. Keck’s experiment in building to maximize solar performance was ratified somewhat unexpectedly for the architect during the house’s construction in a frigid Chicago winter, when he saw the workers stripping off their coats because the interior was so effective at trapping heat. Keck would go on to spend much of his career working to master those properties in hundreds of houses he designed with his brother, William Keck. Today passive solar performance is fundamental to addressing energy efficiency in the climate crisis, but for Keck, potential energy savings during the Great Depression was about thrift, and his House of Tomorrow fit into the Exposition’s wider thesis that scientific progress would bring prosperity. 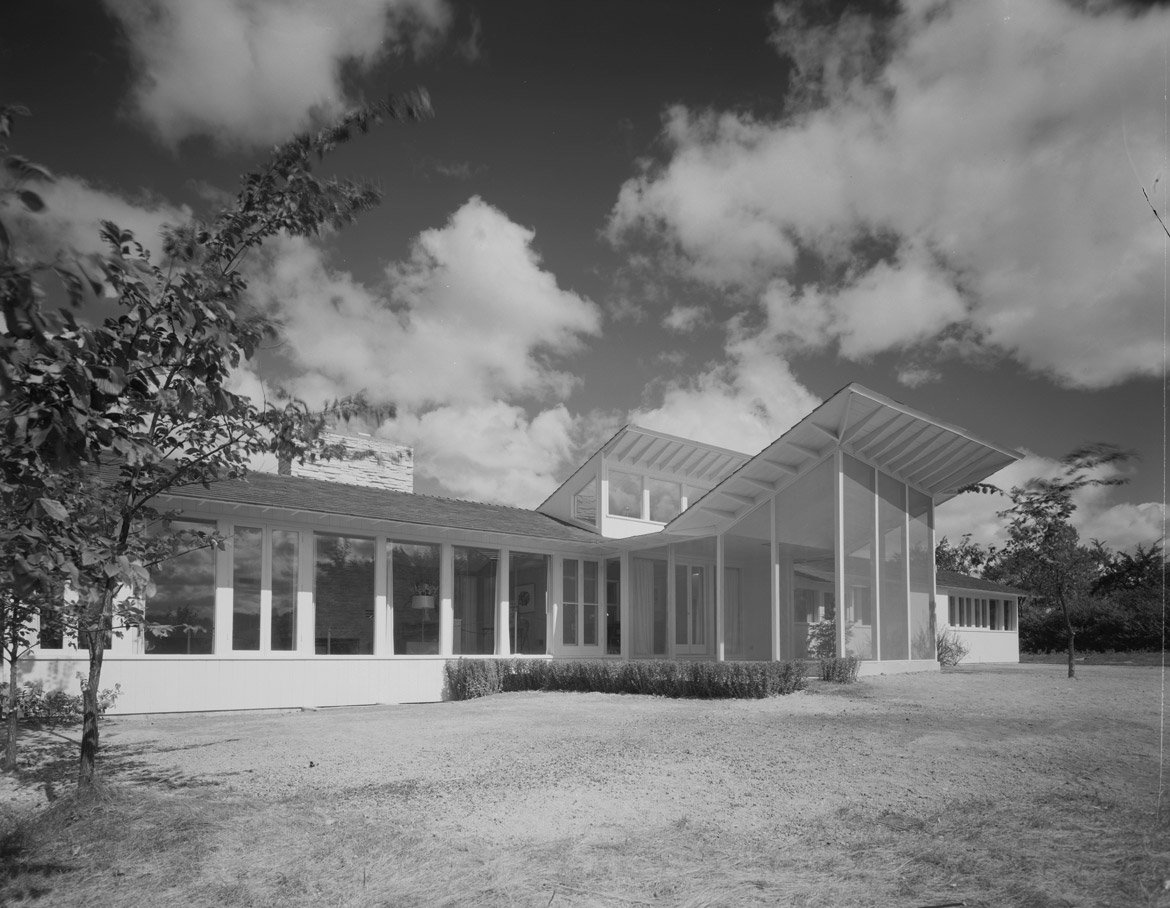 Keck's houses often used specific roof angles to ward away sun in the summer and invite it in during the winter, like this Keck-designed home, the Sloan House in Glenview, Illinois. Photo courtesy of the Chicago History Museum, Hedrich Blessing Collection

While the house is modern in material and structure (construction photos show a steel column core with pinwheeling floorplate beams that make it look like a carnival ride), it’s less so in form. Its three-level setback terracing looks like an Art Deco cake-topper. And the house retained too much heat in warm months, not performing as well as expected, as did some of Keck’s later residential solar designs for private clients.

But the architect continued to refine his designs, and eventually, his solar houses expertly manipulated site orientation, window placement, roof angles and overhangs--as well as new technology like double-paned glass--that could coax the sun’s heat inside during winter and screen it out during summer. These homes could reduce energy costs by a third, and the exhibit’s section diagrams showing roof angles with the changing seasonal angle of the sun tell that story succinctly.

As Keck’s career matured, his work revealed that he wasn’t a material ideologue like his eventual Chicago neighbor and contemporary Mies van der Rohe, who trailed Keck’s glass house with his own by more than a decade (Mies-wasn’t using glass walls to save Ms. Farnsworth money on her heating bills). In the 1940s, Keck’s houses began to take on pitched roofs and wood paneling, looking more like Frank Lloyd Wright Usonian homes than a Miesian steel and glass abstraction. “He turned right when Mies turned left,” says John McKinnon, Elmhurst Art Museum Executive Director and curator of the show. 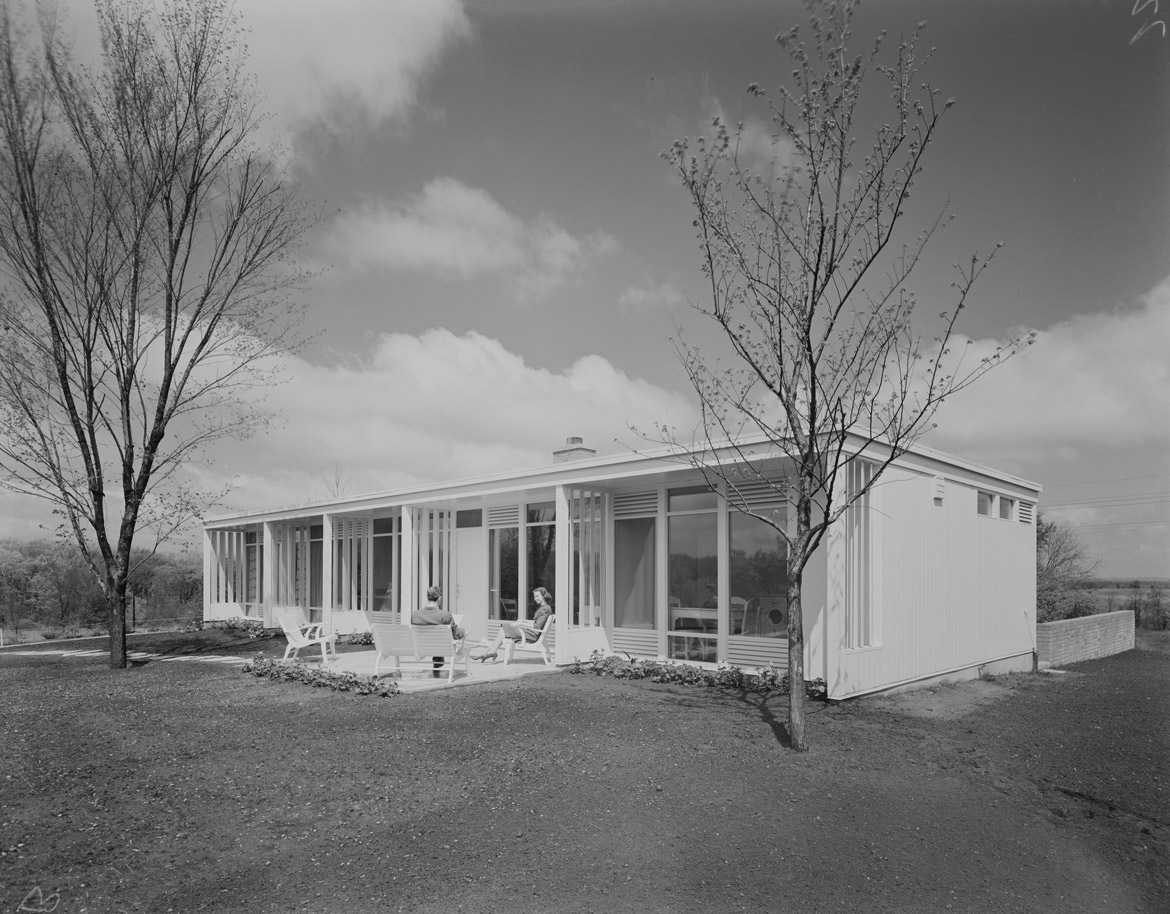 Yet Keck was nearly alone in the material science he was pursuing. Clearly, the closest he ever came to a design polemic is now basic technical proficiency--that and the relatively modest cost of Keck’s houses is perhaps why he isn’t better known today. “He was more driven to look at what they could bring to the next home, a bit more than how he could get the biggest client,” says McKinnon.

The House of Tomorrow was towed to the Indiana shores of Lake Michigan in 1935; it has been vacant since 1999 and is in desperate need of a restoration. Artist Jan Tichy borrowed artifacts from the house to incorporate into two installations that are part of the show. One consists of copper wall segments, bathrooms mirrors, black and white Carrara glass, exterior windows, and glass shower walls. In a darkened gallery, a projector on the floor casts beams of light across these elements. Through a timed cycle of widening and narrowing, the light reveals the patina of the materials and sparks shards of rainbow through the glass. The cycle takes on narrative qualities, with light diffusing and dimming in an accelerated dusk, and brightening with a new dawn every few minutes. Apertures of light appear in squares and rectangles that resemble doors and windows, lending an air of domestic ritual. For Tichy, this installation is asking, “What does it mean to wake up in the House of Tomorrow?” It’s a visceral echo of the house amid an otherwise articulate if staid and buttoned-down show. And it’s a reminder than a groundbreaking, technical search for perfection can still generate enlivening experiences of light and space.