Dwarfed by an enormous American flag hanging from the steel framing of what will become an 80-foot-high lobby, executives at JPMorgan Chase (JPMC) and elected officials unveiled the design of 270 Park Avenue with unusual defiance two days after 30 people were injured in a Brooklyn subway station shooting during the morning rush hour commute.

The incident is feared to set back Midtown Manhattan’s hopes to return to normalcy as Covid worries and work-from-home threaten the future of dense commercial cores. The unveiling of the design for the bank’s 1,388-foot-tall, 60-story headquarters three years after construction began may counter that narrative. It is intended to house as many as 14,000 employees.

The design by Foster + Partners was already turning heads as its massive steel-tube super columns were installed, splaying fanlike from pivot points that anchor the building into the intricate underground network of tracks and passages that emanate from nearby Grand Central Terminal.

Sloping outward, the glass lobby enclosure allows more than half the site area to be devoted to widened covered sidewalks and an outdoor plaza—a public amenity intending to mitigate the impact of the building’s great size. The columns support a 23-foot-deep truss that transfers loads from the angled super columns to a conventional perimeter grid that leaves the occupied space on upper floors column free. 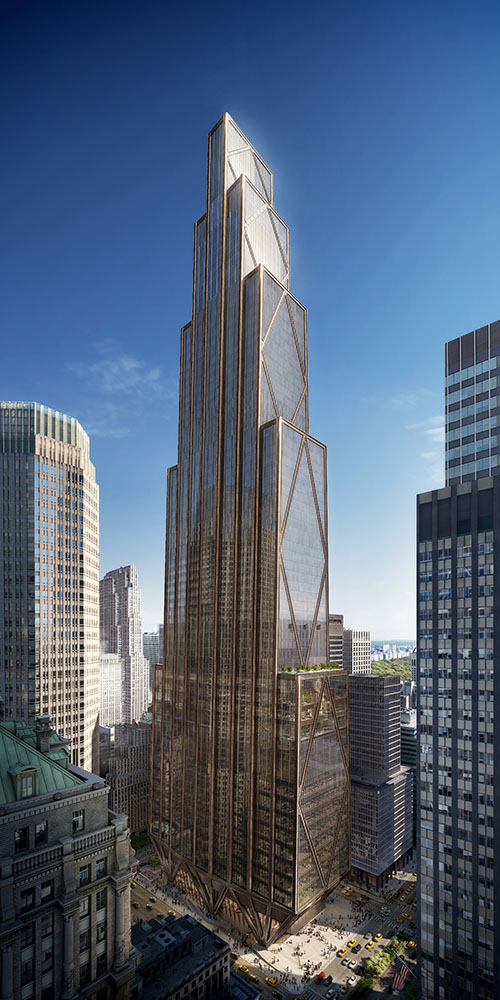 Four setbacks facing the wide avenues slim the 2.46-million-square-foot bulk of the tower as it rises. “It steps back in New York style,” Norman Foster, founder of Foster and Partners, said at the unveiling, “reinforcing the character of Park Avenue.”

Framing, including diagonal braces, is expressed on the surface and clad in bronze with an angel-hair pattern. “You see the bones, the structure, as architecture,” Foster said. The visual weightiness of the building is distinctive amid the march of glassy towers, but it is at odds (at least in renderings) with the intended soaring quality.

Recognizing the post-Covid reality that employees need a reason to commute to offices, the building features workplace and “wellness” enhancements. Ceilings heights are much higher than older skyscrapers, 15.5 feet at the vast 75,000-square-foot trading floors, and 10.5 feet on office floors, which allows greater access to daylight and views through the floor-to-ceiling glass curtain wall. Fresh air supply has been upgraded as has filtration. A three-level space above the trading floors called the Exchange hosts a variety of amenities and convening opportunities that encourage serendipitous encounters as people transfer to elevator banks serving office floors above. 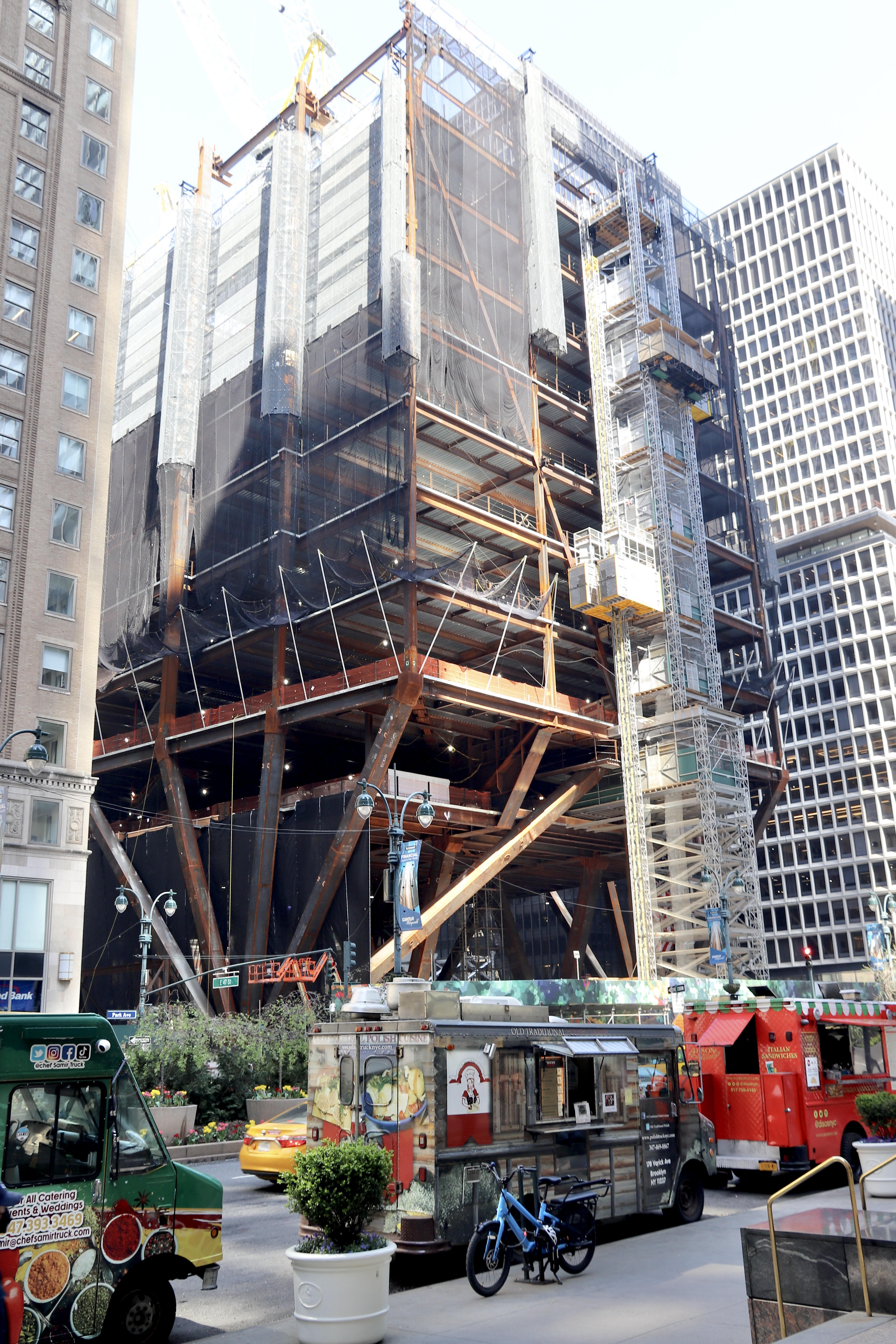 The bank has made an agreement to secure 100 percent of the building’s electrical needs from upstate New York hydropower, which allows the building to be called operationally carbon free, though no new renewable supply is being added. It has also reduced energy needs with extensive insulation and a triple-glazed curtain wall—tactics all but unknown in New York commercial building. It avoids the use of fossil fuels with heat recovery, air-source heat pumps, and backup electric boilers. Direct outside air boxes (DOAS) supply air to small zones, avoiding the use of HVAC over large areas at times of low occupancy. The high ceilings deepen penetration of daylight, which reduces the need for electric lighting.

There are tradeoffs. The high floor-to-floor heights improve the environment for staff at the expense of the very dense and light-deprived surrounding blocks—a product of a zoning overlay that has encouraged development of at least two other supertall towers around Grand Central. Vishaan Chakrabarti, founder of PAU and collaborating architect on the project, cites the adjacency of the station and ample transit supply as “an enormous carbon-footprint advantage,” because of its proximity to the transit nexus.

The new tower replaces the bank’s 52-story headquarters on the same site. It was designed by Gordon Bunshaft of SOM for Union Carbide and completed in 1960, when it was regarded as elegant if overbearing, even at half the height of the Foster design. Critics and preservationists deemed it worthy of landmark designation, which it never succeeded in achieving, and also protested the waste entailed in what was said to be the largest building ever intentionally demolished. (JPMC claims that 97 percent of the demolished materials were recycled, but it has not said if the carbon embodied in the new construction will be offset.)

Union Carbide was regarded as an important commitment to New York at a time when people and businesses were abandoning big cities for leafy suburbs. In a similarly fraught time, Chakrabarti feels that cities need people like JPMC’s CEO, Jamie Dimon, “who thinks he has got to build in New York because he believes in it.”