This website requires certain cookies to work and uses other cookies to help you have the best experience. By visiting this website, certain cookies have already been set, which you may delete and block. By closing this message or continuing to use our site, you agree to the use of cookies. Visit our updated privacy and cookie policy to learn more.
Home » Former Taliesin School of Architecture Grows New Roots at Paolo Soleri's Arcosanti
Architecture News

On a flat piece of land near a dry riverbed, a student puts the finishing touches on framing a small, pitched-roof structure, set to be coated with a mud plaster finish. Up a hill, a group gathers in a classroom to learn the nuances of universal design, diving deep into a schematic design for a three-structure family compound for a couple who both use wheelchairs. In another room, a young scholar makes an architectural presentation for a group audience. 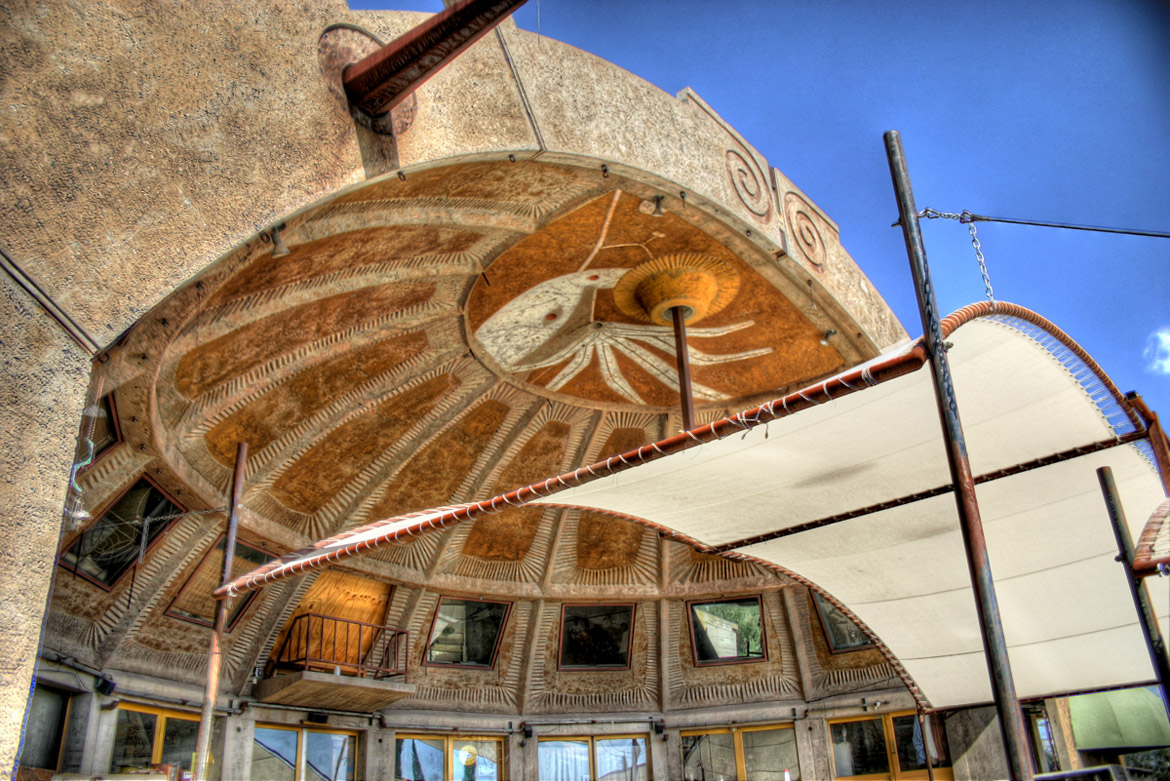 Photo by Cody Raskin, via WikiCommons

The school traces its roots to an apprenticeship program founded by Frank Lloyd Wright 90 years ago, which offered hands-on training both at Taliesin in Wisconsin and at Taliesin West, as the sprawling Scottsdale outpost was called.  After the death of Wright’s widow in 1985, the program became formalized, received accreditation, and began offering a professional degree called a master’s in organic architecture. But several years ago, friction arose between the school and the Frank Lloyd Wright Foundation, which owns both Taliesin properties.

“It was like a couple who grew apart,” explains retired food industry entrepreneur Dan Schweiker, who joined the school’s board in 2018 and is now its chair. “The foundation and the school had different interests.” Schweiker cites financial strains as a factor in what he calls “the troubles.” The foundation spun the school off as a separate entity in 2017, but problems persisted: there was a split, a reconciliation, and then a final split.

For a while in late spring 2020, it seemed as though the school would cease to exist, says Schweiker. He credits architect Victor Sidy, the school’s dean from 2005 to 2015, as instrumental in the push to save the school. “I was surprised at how steadfast the enrolled students were about wanting to continue their education,” says Sidy, now a member of the school’s board. “They were committed and passionate about the school, even when shutting it down seemed inevitable.”

Moving the school to Arcosanti lock, stock, and laptop wasn’t really a hail Mary pass. “This was not a shotgun wedding,” Sidy says. “The dating had been going on for quite some time.” Italian-born Soleri had been one of Wright’s apprentices in the 1940s, leaving after a philosophical rift with the master. He first established Cosanti in the 1950s as his home and studio in suburban Phoenix, experimenting with cast-earth structures and a system of eco-friendly urban planning that he called arcology. At Arcosanti, Soleri envisioned an ambitious community, designed as a hands-on learning and living environment in the vein of Wright’s apprenticeship program. For many years, Soleri and his Cosanti Foundation, which operates both sites, maintained a frosty connection with the Wright Foundation, says Sidy, but relations began to thaw in the mid-2000s when the two organizations began collaborating on projects and workshops. Arcosanti was the perfect place for the school, he notes, because the cultures of immersive learning, as well as living and working together, were highly similar. 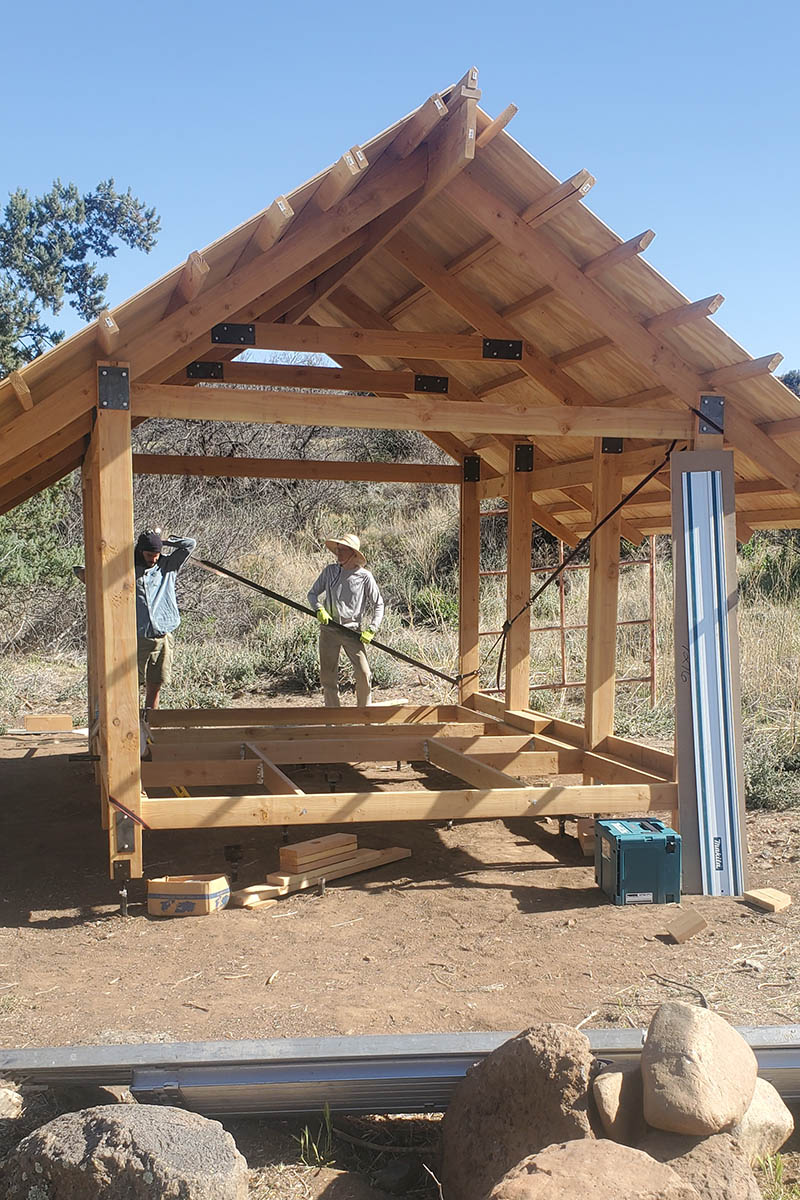 That the school could move smoothly from Taliesin to Arcosanti should come as no surprise, explains school president Chris Lasch, who joined in 2016 as dean of academic affairs and runs the Tucson- and New York-based firm Aranda/Lasch. “The school has always been nomadic,” he says. “For decades [from 1937 until 2020] everything was packed up and moved seasonally between Wisconsin and Arizona. In the summer of 2020, instead of going to Wisconsin, we packed up and moved to Arcosanti.”

The curriculum, faculty, and accreditation also remained intact, Lasch says. Prior to the split from the foundation, Aaron Betsky, the school’s former president, opted to move on from the school. Lasch stepped into the president’s role and reached out to Stephanie Lin to become dean. “I was drawn to the distinctiveness of the program and the culture here,” says Lin, who has a design practice in New York and previously taught at The Cooper Union. “It’s a huge opportunity and a transformative experience to continue the school and experiment with something new.”

Currently, the school enrolls 11 students, all pursuing either a master’s in architecture or participating in a semester-long immersion program—a small number, Lin admits, but one explained in part by Covid-19’s suppression of in-person learning and effective restriction on the participation of foreign students, who have historically made up a large percentage of the enrollment. The optimum capacity is 40 students, and Lin and Lasch say they are confident that enrollment will grow now that the dust from the move has settled and pandemic restrictions continue to ease. “It does take a special kind of student to be here,” says Lasch. “It is a different kind of learning experience from a traditional university.”

In an arrangement similar to that at the Taliesin campuses, students live on site in small apartments and houses scattered around Arcosanti’s high desert grounds, share cooking responsibilities, and maintain the studio and classroom spaces. They’ve undertaken renovations as well, rehabbing areas of Arcosanti’s cubical and apse-shaped concrete buildings to suit the school’s needs. They’re also helping to restore Cosanti with the aim of making it a second campus in the future. Academic classes are taught by a group of core faculty, including—in what feels like some kind of cosmic through-line—Lloyd Natof, Frank Lloyd Wright’s great-grandson, who teaches a furniture class. The shelter program, in which students design and build a small structure as a thesis project (such as the afore-mentioned pitched-roof building), is also alive and well, with a half-dozen already dotting the site. A new curriculum addition since the move? “We now have a class that explores arcology,” says Lin, “which engages the Arcosanti archives.” In April, Lin, with the help of students, curated an exhibition at Arcosanti in which artists explore Wright’s concept of organic design. 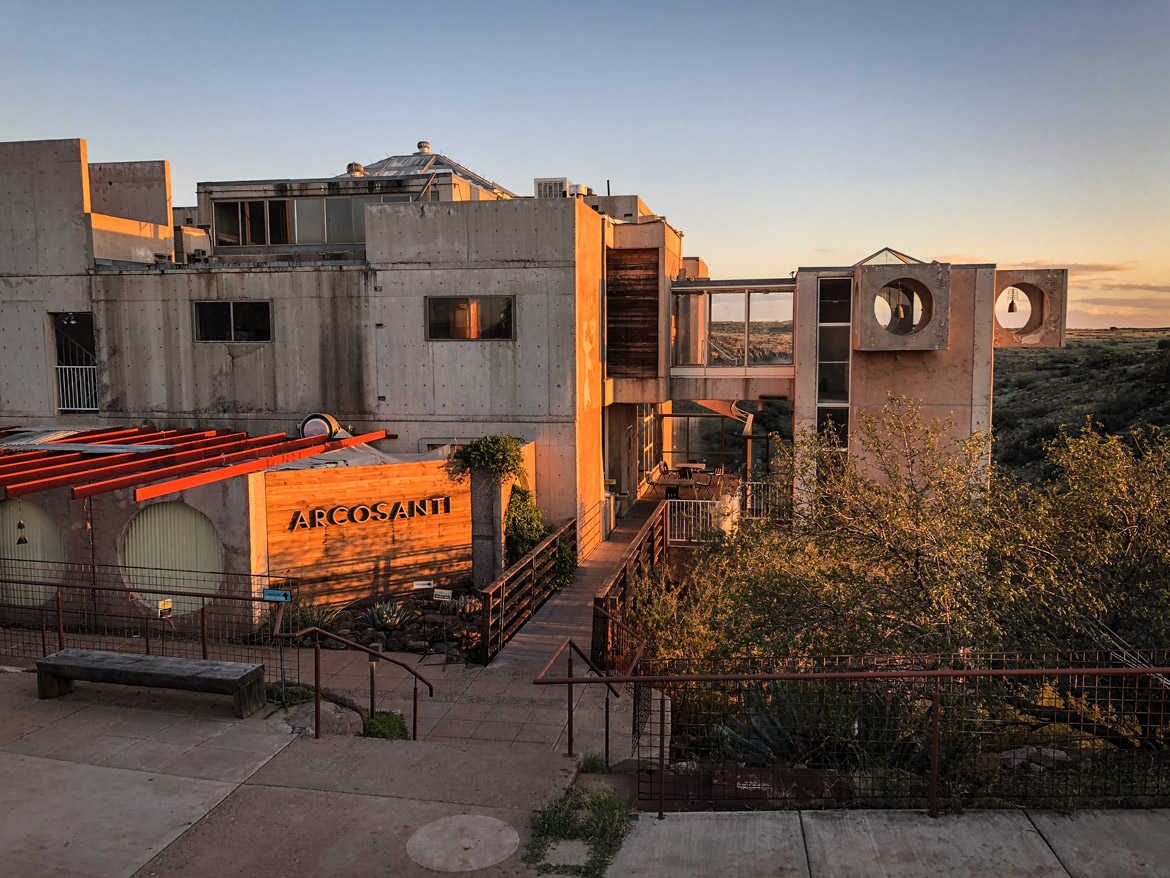 In the meantime, the Frank Lloyd Wright Foundation is beginning to formulate its own new educational initiative, the Taliesin Institute. Details remain scarce, but the institute will be led by Jennifer Gray, the former curator of drawings and archives at Columbia University’s Avery Architectural and Fine Arts Library.

At Arcosanti, The School of Architecture now seems to be on a healthy path. “We have a five-year lease here,” says Schweiker, “with an easy option to renew. Someday, we hope to have smaller, international campuses around the world and a campus that we own, but we will always have a connection here.”

“Between Covid and the split, the school has weathered a perfect storm,” says Sidy. “Those of us who had the Taliesin experience will always be sad that the school is no longer there, but there is a new energy here, a new experience. The school is on fertile ground and will continue to grow. It has proven that it can transcend its place.”

School of Architecture at Taliesin Announces Plan to Relocate