Earlier this summer, I traveled to Buenos Aires to give a lecture at Universidad Torcuato Di Tella. It allowed me the chance to discover the cinematic Argentinian capital and visit a handful of projects by the school’s recently appointed dean, Marcelo Faiden, his partner Sebastián Adamo, and their team at Adamo-Faiden.

The city's urbanism is strongly defined by its grid, an inheritance from The Laws of the Indies—the colonization strategy of the Spanish Crown. Located at the southern border of an estuary between Uruguay and Argentina, Buenos Aires, rather than facing the marshy waterfront, is more a city organized as a patchwork of neighborhoods, all with their own character and scale. Over the centuries, its zoning, volatile economy, and repetitive, relatively narrow lots have produced varied and textured streets densely lined with trees, making strolling through Bueno Aires a pleasure.

In the last decade, Adamo-Faiden has developed an extensive body of work in careful dialogue with this urban condition. By embracing the relatively mild climate, many of the firm’s mostly residential projects bring the exterior in through porous surfaces, lush balconies, yards, and roof terraces. In a country where being resourceful is paramount, each move Adamo-Faiden makes is carefully contemplated and precise, employing a restrained palette of primarily concrete and painted steel. 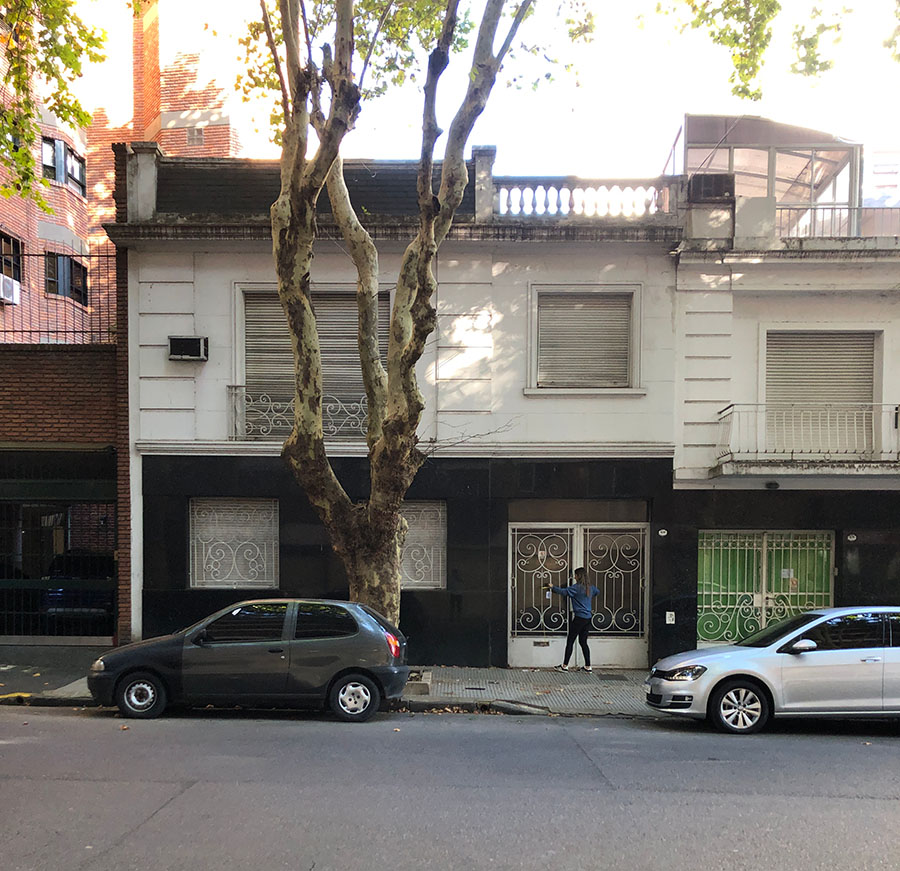 Spurred as much by environmental concerns as a boom in pandemic pets, there is a growing appreciation for non-human creatures within our cities, triggering the design of new communities and spaces to support them. At the end of our tour, Marcelo took me to the just-completed Guayaquil Veterinary Clinic. For this adaptive reuse project, Adamo-Faiden took a typical urban house from the beginning of the 20th century and removed its central bay—where the circulation was originally located. This excision creates a new semi-covered passage that connects the street with a lushly planted rear garden open to the community. A concrete floor with exposed stone crosses this space defined by the vegetation and the outside climate.

The glazed side bays are organized on two levels open onto the central passage. On the lower floor, they contain a pet store and the veterinary clinic, while on the upper floor, there is a lab, X-ray room, and operating room. The existing front and back walls are covered with corrugated sheet metal. This material choice permits the walls to ventilate, and unifies the building's appearance. That abstraction heightens the typological reading of this unusual structure within this residential area, while quieting the building's presence amid the street wall. It becomes an elegant canvas to catch the ever-changing shadow of the immense London Plane tree in front. Here, the architects did not overplay their hand. Their restraint allows life to unfold all around their work. Above: the building's central passage. Photo by Javier Agustín Rojas

Below: the first and second floor plans and building section (not shown at same scale). Drawings courtesy Adamo-Faiden

Florian Idenburg is a founding partner of New York–based SO – IL.