Long famed for its perfume, the ancient town of Grasse sits high up in the hills above Cannes, overlooking the French Riviera. While the terraced perfumers’ gardens now belong to the likes of Dior and Chanel, the dense historic center has deteriorated, its decaying fabric home to a poor, immigrant population. In one particularly rundown neighborhood, designated a priority zone by the national government, the municipality chose to build a new library and cultural center to replace an old, inadequate facility nearby. The result of targeted demolitions in the 1940s, the site was complex: steeply sloping, it measured barely 10,000 square feet for an ambitious 40,000-square-foot program; it included historic housing that had to be incorporated into the project; and it faced a large 1950s covered reservoir whose structure was too fragile to support any extra load. It was into this challenging context that Paris- and Nancy-based Beaudouin Architectes and Marseille-based Ivry Serres, winners of the 2011 architectural competition, deftly inserted their clever, elegant design. Constricted by the medieval urban fabric (above), the building nevertheless has breathing room where it opens onto large plazas (top). Photo © Fernando Guerra, click to enlarge.

“We were immediately struck by Grasse, with its very narrow streets, the houses almost touching each other on either side, and the wonderful strong light that slips in between,” recalls Laurent Beaudouin. “Though complex, the site allowed this type of constriction but also breathing room, thanks to the two public squares, place du Rouachier and place Vercueil, on its northwestern and northeastern flanks.” Located on the plot’s southeastern side, the historic housing offered capacity for just a third of the required floor area, so the architects had to squeeze all the rest into the remainder of the site. To do so, they excavated a basement story and dramatically cantilevered the upper floors. Cantilevering portions of the structure helps navigate the tight urban fabric of which the building is a part. Photos © Fernando Guerra 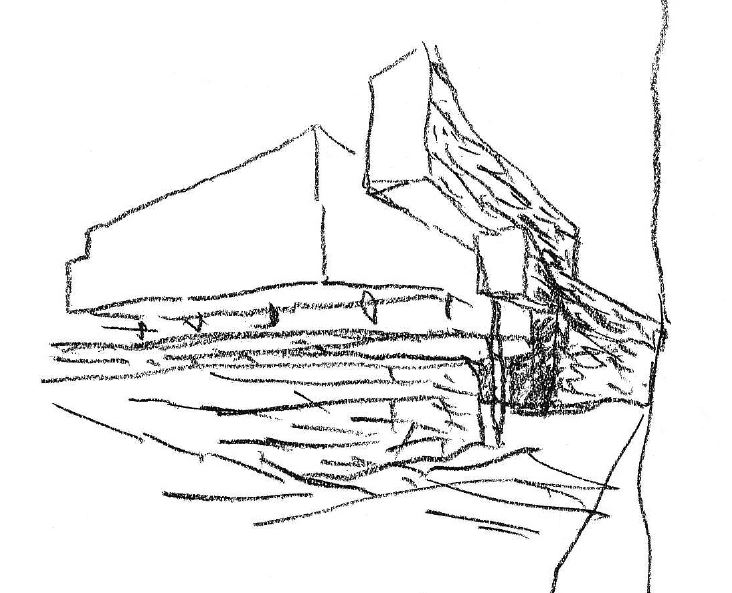 Because of the sloping ground, the building has four entrances, on different levels. While the basement contains HVAC, level I, entered via the historic housing on rue Charles-Nègre, contains the library for children to age 6, and a 108-seat auditorium, carved into the hillside. On level II, which has two lateral entrances on place Vercueil (one public and the other for staff), there is a double-height temporary-exhibition space, as well as a smaller gallery dedicated to local photography pioneer Charles Nègre (1820–80), for whom the project is named. The main public entrance and lobby are on level III—which is aligned with the reservoir roof, now place du Rouachier, landscaped by Marseille office Stoa—and are connected to the green space by a footbridge. Levels IV and V, which jut far out over the reservoir, contain the two principal library floors, with a small terrace and cafeteria up top at the rear. Gutted in order to integrate it into the project, the historic housing contains both public spaces, seamlessly joined to those in the new structure, and backstage activities, while staff offices are stacked up in the southern corner.

Given both French know-how and the region’s earthquake regulations, concrete was the obvious construction material. “Historically, Grasse’s public buildings were in stone,” points out Serres, “which contrasts with the colored stucco facades of the typically Provençal housing. Not only are we following that cue, we have a compact structure with high thermal inertia that’s ideal for the climate here.” As well as striking a strong spatial note, the cantilevering vaults (see sidebar, below), inspired by Louis Kahn and José Luis Sert, help to attenuate the relatively low ceiling heights engendered by the dense program. Three vertical shafts on the top three levels further enrich the spatial experience, and bring daylight from above. In addition to stair and elevator cores, there is a structurally separate tower to the southeast that contains the main vertical route—monumental stairs linking levels I to III, and a long hairpin ramp connecting levels III to V. “In our libraries and museums, we try to slow down time,” explains Beaudouin. “Places of contemplation, they require a temporality different from the hustle and bustle outside. The ramp is part of the promenade architecturale, prolonging the journey in both time and space.” Vertical shafts enrich the spatial experience (3). The concrete colonnettes are a striking feature inside (4) and out (5). Photos © Fernando Guerra Since libraries need daylight, the new structure’s envelope is entirely glass. But, because of the region’s strong sun and the proximity to neighboring apartments, it is hidden behind a grill of white prefabricated concrete colonnettes, which would stretch five miles if placed end to end. Fixed to steel for seismic stiffening, and spaced just 2 inches apart to deter pigeons, the colonnettes catch the light when viewed from inside, thanks to their curvature and striation, reminiscent of both bamboo and classical fluting. Outside, they appear graphically striking and opaque by day, but at night the building glows from within. On the place du Rouachier, below the central and widest vault, the glazing has been left exposed, providing an urban connection between outside and in and contributing to the promenade architecturale: shown what happens inside, you are encouraged to try to get there. Mean­while, at the rear, a rectangular turret, signaling the library’s presence when viewed from the surrounding hillsides, recalls the medieval towers that once bristled above Grasse. The structure’s envelope is entirely glass, bringing daylight to the interiors (6), but much of the glazing is hidden behind a grille of prefabricated colonnettes (7 & 8). Photos © Fernando Guerra At the time of writing, the Charles Nègre Library and Cultural Center was a few weeks from opening, though staff had organized outreach visits. “Initial reactions among the local population are often very negative,” says director Valérie Molins. “Remarks such as, ‘Oh, it’s not very Provençal’ or ‘There’s too much concrete’ or ‘It’s an eyesore!’ Once we explain the building, people generally leave with a far more positive view.” Children, she says, have no such aesthetic qualms, seeing only the good side: three times larger than the old facility, its collection doubled in size, the new library offers video games and computer terminals unavailable before. While it remains to be seen whether locals will reject it as an alien, elitist landing, this sophisticated project ticks all the boxes for architecture aficionados, who will immediately recognize the care that went into its making, from the staggered casting of the concrete panels—another borrowing from Kahn, and a labor of love for both architects and contractor—to Serres’s Mendes da Rocha–inspired railings and oak desks specially designed to hide monitor backs. Indeed, no effort has been spared to hide technical mess and clutter. At once simple and complex, heavy and light, solid and diaphanous, this monastically elegant building finds potential in constraint and poetry in paradox.

Too Close for Comfort 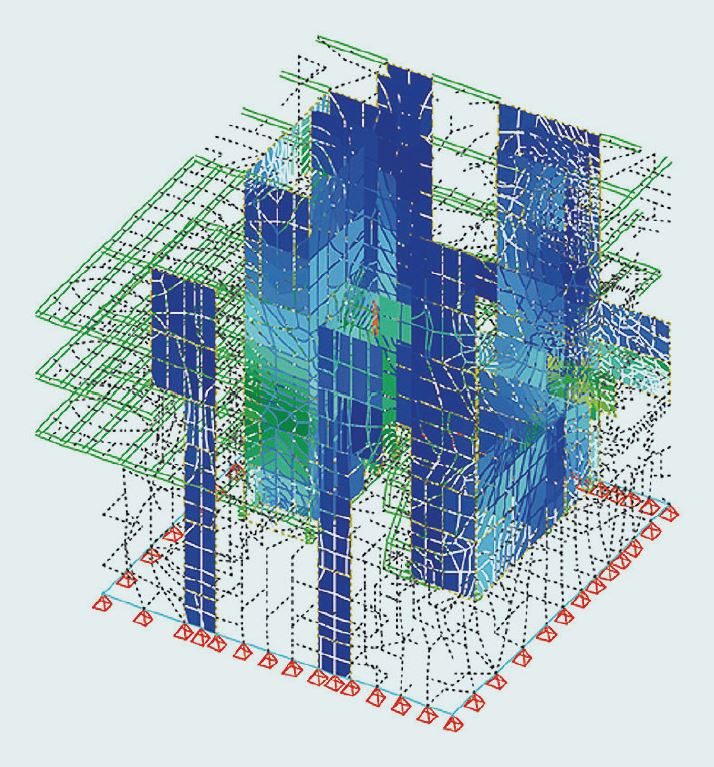 Building the Charles Nègre Library and Cultural Center presented technical challenges on several fronts. First, construction had to be undertaken in a historic conservation area reachable only via narrow medieval streets. To ensure fire-service access, the municipality cut an arched passageway through existing buildings into place Vercueil, which became the arrival point for building materials and mixer trucks. But the arch was too small for a crane, so a truck-mounted crane had to be brought in to winch the site crane into place over the houses.

Construction began in late 2013 but was halted in 2014, by the regional archaeological department, when it became apparent there were rare Bronze Age remains on-site. An excavation was undertaken, which under French law had to be paid for by the municipality, including protecting the archaeologists from danger during the dig. To this end, a subterranean concrete retaining wall was built in front of the reservoir to prevent it from possible collapse. Due to this unanticipated expense, the municipality sought savings elsewhere, which is why the concrete of the main structure is now gray rather than white, as originally planned. The excavation also meant time-consuming HVAC redesigns, in case the archaeologists decided the remains must be preserved and the mechanical floor had to move to an upper level. In the end, the HVAC basement was allowed, but the redesigns caused problems in the final days of construction, when it turned out that certain connections were missing and holes had to be drilled through the vaulted floor plates.

Construction was further slowed by an electrical transformer that the municipality had not thought to move, and by the elimination of asbestos in the historic housing. Then, in 2015, one of the long-neglected historic structures collapsed—fortunately, on a Saturday morning, when no workers or passersby were present. Legal proceedings to determine responsibility are still ongoing (the municipality hopes the contractor’s insurance will pay), but the architects ended up having to rebuild with facades that mimic the fenestration of the original structure. Since floor levels follow a new logic, some of them arrive in the middle of windows; to hide this, mirrored glass has been placed in front of the floor plates on the exterior.

Finally, there was the structural challenge of how to make a cantilevering concrete building safe in a seismic zone. For Jean-Marc Weill of engineering firm C&E, who worked on the building from the design phase to completion of the shell, “the project presented an interesting paradox, one that needed to be addressed right from the start to avoid problems down the line.” First the building’s weight was calculated, then what kind of seismic forces it might be subjected to (image, inset). Earthquake regulations require that loads descend in a straight line, so vertical circulation cores began to be placed and scaled to prevent the building from twisting when subject to tremors. Then came dimensioning of the floor plates, which needed to be extensive but hollow. “The exercise is not dissimilar to what Wright did at Fallingwater,” continues Weill. “Laurent and Ivry had already come up with the idea of floating concrete vaulting, as at Louis Kahn’s Kimbell Art Museum, though these are not vaults in the strict sense, but, as at Fort Worth, profiled concrete beams, which help stiffen the structure laterally.” Structure and space are thus inextricably intertwined, a tectonic approach to architecture in which nothing can be added or taken away. AA