Throughout Houston, live oak trees extend their gnarly branches and evergreen leaves over sidewalks and lawns, providing welcome shade in a hot, humid climate. Having gone to graduate school at Rice University in Houston, Kevin Daly was familiar with the trees and the protective canopy they provide. So when his Los Angeles–based firm kdA and collaborators at Mexico City–based Productora entered an international competition for a new headquarters of Houston Endowment, they immediately saw the horizontally spreading branches of the trees as an inspiration. “From day one, we saw a canopy as a critical part of our design, an autonomous element hovering above the building,” says Daly.

Founded in 1937, Houston Endowment is one of the largest philanthropic organizations in the city, focusing on funding for arts and parks, civic engagement, and public education from pre-K through high school. For many years, its offices were in the I.M. Pei-designed JP Morgan Chase Tower downtown, which offered great views of the city but gave it no public face. “Everyone knew them,” says Daly, “but no one knew what they looked like.” With help from Malcolm Reading Consultants, the endowment organized a design competition in 2019 that attracted 120 entries from 22 countries. A short list of four firms—kdA, Deborah Berke Partners, Olson Kundig, and Schaum/Shieh—presented their schemes in early 2020.

When kdA was selected, the Covid pandemic was just beginning. With the coronavirus spreading around the world, the winning architects in L.A. and Mexico City moved their collaboration online, creating a virtual studio for the project. Daly and Productora partner Wonne Ickx had taught together at UCLA and had often talked about working on a project together, says Daly. The client encouraged collaboration, so this was the perfect opportunity.

The building occupies a 1.5-acre site in Spotts Park near the edge of Buffalo Bayou, a natural wetland that meanders through Houston and into Galveston Bay. A YWCA designed by Taft Architects had been on the site since 1982, but was torn down in 2011. The location offered the Endowment views toward downtown, about 2½ miles away, and the chance to engage directly with the city’s parks and issues of sustainability. “We told them they needed a front door to the street and a back porch overlooking the city,” says Daly. The headquarters sits at the edge of Spotts Park. Photo © Iwan Baan, click to enlarge.

Sustainability drove design throughout the project. After deciding to tuck the 31,700-square-foot building under a large shading device, the architects worked with engineers at Transsolar to maximize its performance.

Perforated aluminum louvers set at a fixed angle allow light and air to flow through, while photovoltaic panels collect solar energy. The solar panels, in conjunction with a closed-loop system of 30 geothermal wells, each 300 feet deep, should make the two-story building net zero for at least nine months of the year, says Luke Smith, a kdA senior associate. Energy-modeling analysis helped determine the canopy’s dimensions, resulting in a rhomboid shape hovering above the rectilinear building. On the south, the canopy extends 30 feet beyond the building’s curtain wall, while jutting out just 10 feet on the north and 16 feet on the east and west. Such shading permitted the architects to specify glass with high visible-light transmittance (VLT) in the curtain wall and thereby reduce the need for electric lighting inside. The glass in the building allows 70 percent of visible light through it, compared to the VLT of about 43 percent that would have been needed without the canopy, says Smith. A lightweight steel frame with slender columns, reminiscent of those at Renzo Piano’s nearby Menil Collection and Thomas Phifer’s Brochstein Pavilion at Rice University, supports the canopy, tapping into an ongoing legacy of modern design in Houston. Perforated louvers in the canopy animate the scalloped facades with light and shadow. Photo © Iwan Baan

The building rests on a poured-concrete foundation, with parking set half a level below grade, allowing it to be naturally ventilated. The entire structure, including the basement garage, is above the 500-year-flood level—crucial in Houston, which has suffered catastrophic storm inundation in recent years. The architects and engineers devised a hybrid steel-and-cross-laminated-timber (CLT) frame that’s a first for Houston, says Daly, and combines the benefits of light weight from the steel with the renewability of timber. A scallop-profile aluminum rainscreen gives depth to the facade, while layers of insulation and gypsum wallboard, along with a fluid-applied air barrier, reduce solar loads inside the building. The CLT elements were prefabricated in Quebec, while the building’s canopy and rainscreen were made in Mexico, reducing the time for construction and allowing the project to move from design to completion in less than two years. The main entrance is on the north side. Photo © Iwan Baan

The building’s interiors are a far cry from the Endowment’s previous home. Instead of mostly private offices that seemed designed for a law firm, the new workplace emphasizes open spaces and generous shaded terraces on both floors. “We seemed inaccessible to the people we served,” says Ann B. Stern, president and CEO of the Endowment, talking about the old offices. “No one wanted to come to our house for meetings.” That is no longer a problem. Interiors were designed to encourage spontaneous meetings and collaboration in places such as the lobby (1) and office areas (2 & 3). Photos © Iwan Baan The project has given the organization the chance to rethink its workplace. Although Covid convinced it to retain some private offices—mostly on the north side of the building—the new headquarters offers much more space for collaboration and relaxing. These communal areas mainly face south over the park and toward the downtown skyline. “We wanted to democratize the best views, so everyone could enjoy them,” explains Daly. A 35-foot-high atrium near the center of the building, along with clerestory windows below the roof, bring that much more daylight inside, while a café and a lounge on the second floor encourage employees to interact. The number of staff has remained at 40 since the Endowment moved, but the new building gives it space to grow. A multipurpose room on the ground floor accommodates talks and presentations, and can be divided in two by a set of sliding panels. Paintings by Houston artists—including Rick Lowe, Delita Martin, Ami Mehta, Julie DeVries, and Phillip Pyle II—animate the interiors throughout the building.

Sitting by itself at the highest part of Spotts Park, the new headquarters for Houston Endowment could have come across as aloof or haughty. Instead, its delicate frame and casual outdoor spaces express transparency and connection to their surroundings. Its ethereal white canopy with daylight tumbling through it entices visitors to come closer and see what’s happening inside. If they do, they’ll find a building speaking a language that sounds just right for an organization dedicated to improving the public realm. 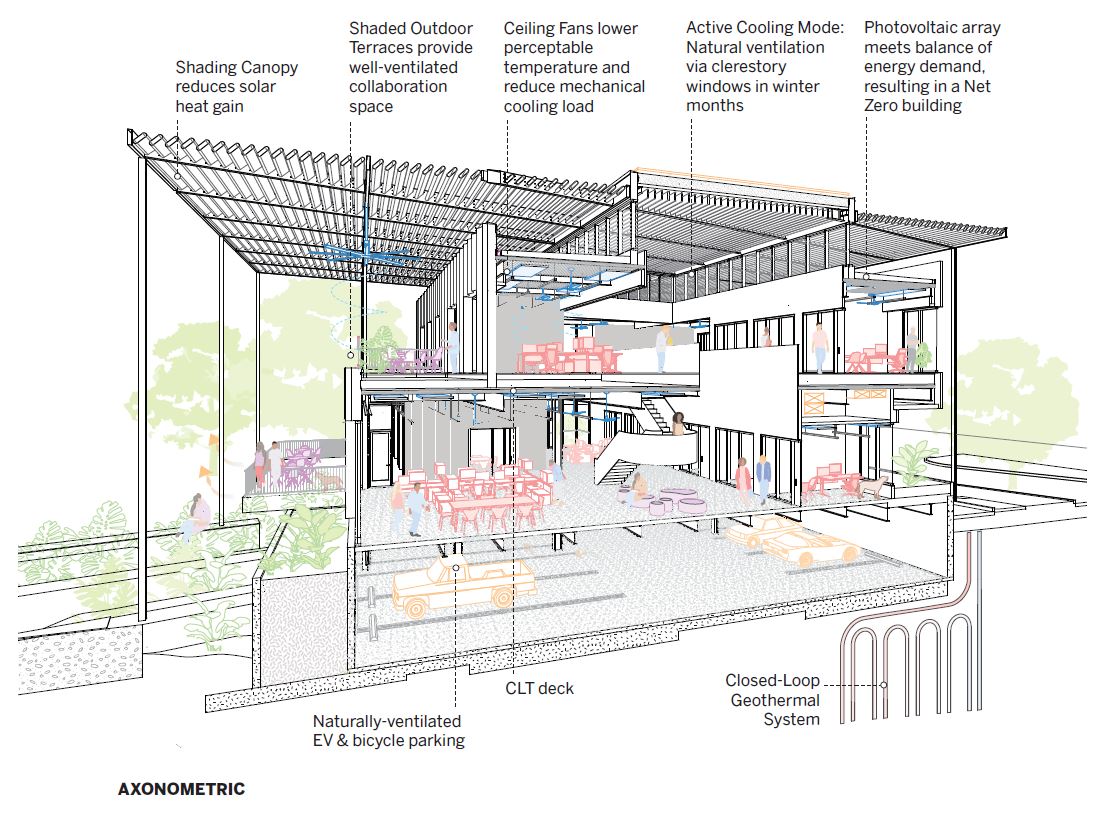