This website requires certain cookies to work and uses other cookies to help you have the best experience. By visiting this website, certain cookies have already been set, which you may delete and block. By closing this message or continuing to use our site, you agree to the use of cookies. Visit our updated privacy and cookie policy to learn more.
Home » Architectural Record and Architizer Team Up with AIDS Memorial Park Group for Design Competition in NYC
Architecture News 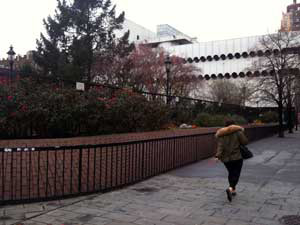 AIDS Memorial Park, a coalition of individuals and groups committed to recognizing the ongoing AIDS crisis, has teamed up with Architectural Record and Architizer to host a design competition for a park, memorial, and small educational center in New York City’s West Village, across from the now-shuttered St. Vincent’s Hospital. Entries will be accepted today through midnight on January 21, with winners being announced on February 1.

A 10-member jury of esteemed architects, critics, artists, activists, and others will evaluate the submissions. The first place winner will receive $5,000, and a runner-up will receive $2,000. The coalition aims to complete construction by World AIDS Day on December 1, 2014. Entries can be submitted through the Architizer website.

The project’s proposed location is Triangle Park, a roughly 16,000-square-foot patch of land bordered by Seventh Avenue, 12th Street, and Greenwich Avenue. The neglected pocket park is across from the former St. Vincent’s, which was closed in 2010 due to financial woes. Founded in 1849, the well-known medical facility was at the epicenter of New York’s AIDS epidemic and housed one of the nation’s oldest and most acclaimed HIV treatment programs.

“We envision AIDS Memorial Park as a vital community park that integrates green public space with a living memorial,” says Keith Fox, president of McGraw-Hill Construction and chairman of AIDS Memorial Park’s executive committee. “We believe that our design process will engage the best architects, as well as landscape and urban designers, to propose inspirational, imaginative, and thoughtful alternative solutions for the park and underground space.”

The hospital and park are now owned by Rudin Management, which plans to construct residential towers and townhouses on the property, as well as convert the park into a privately owned public space. Earlier this year, a group called Queer History Alliance proposed transforming the park into a memorial to the countless AIDs patients who were treated at St. Vincent’s. The group also hopes to create a 10,000-square-foot educational space below ground, according to a recent article in The New York Times.

Design competition organizers say the project aims to not only commemorate the more than 100,000 New Yorkers who have died from AIDS, but also to celebrate the efforts of caregivers and activists involved in this ongoing health crisis.

Jury chair Michael Arad, designer of the The National September 11 Memorial, says he is honored to be involved. “The redesign of the grounds of the old St. Vincent’s hospital has afforded a unique opportunity to create a meaningful public space,” he says. “My fellow jurors and I are looking forward to reviewing proposals that imagine both a neighborhood park that will serve the surrounding community, and a significant memorial that can serve as a symbolic touchstone as we commemorate 30 years of the AIDS epidemic.”