To judge by the crowds, the Japanese love art. While four national institutions hold major collections, the crowds at blockbuster traveling exhibitions of masterworks by native artists (Hokusai) or foreign ones (Monet) have catapulted Tokyo and Japan into the front ranks of museum attendance. According to Japanese national museum sources, Tokyo hosted five of the 10 best-attended exhibitions of art in the world last year. The National Art Center, which recently opened in Tokyo, uniquely serves that swelling audience of museumgoers. 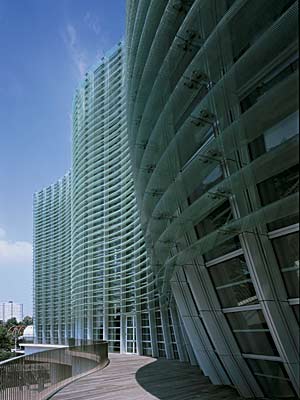 Seen aerially, the arts center’s dual primary functions stand out against the surrounding rolling greenery of the nearby Aoyama cemetery and the Rappongi district. Placed within the footprint of a former military installation, the National Art Center’s structure appears split into two distinct formal types: a sensual, undulating glazed wall wraps along an entire facade, gripping a large, boxlike structure. Turf roofs with decks and surprising geometric elements erupting from below grade indicate that the center comprises multiple levels, with two basement floors and six above-grade floors not obviously apparent from the air.

In planning since the 1970s, and designed and constructed between 2000 and 2006, this mega art center combines a random collection of spaces that had been scattered throughout Tokyo, particularly in the Ueno district, into one place—at 12,909 square meters (138, 951 square feet) of exhibition space, the largest in Japan. According to the late architect Kisho Kurokawa, the center forms a giant “display machine.” The utilitarian structure forming the core houses seven large, column-free exhibition halls. At 21,527 square feet each, blocks of space can be combined for a variety of exhibition types, including the massive NITTEN Japan Fine Arts Group show. Formerly held at the Tokyo Metropolitan Art Museum, this, the largest art exhibition in Japan, showcases 12,000 works of art annually from late July to September, consuming 107,639 square feet in five collection “blocks.”

Strong geometry sets a heroic scale to the interiors. Two inverted cones, reached by connecting walkways or elevators, house a restaurant and a café on their upper levels. According to the architect, the perching cones mask a real need: making maximum use of floor area by reversing the usable space. An overlook from exhibition levels peeks all the way down to the subterranean zone, allowing visitors to survey the unfolding scene and providing glimpses out to the surrounding cityscape. The total interior environment serves, like the Great Court at the British Museum, as a kind of enclosed piazza.