Kengo Kuma's signature screens, deployed inside and out, create a serene oasis for viewing works in modest yet assertive museum

Though embedded in a mammoth, mixed-use development, the comparatively modest 50,590-square-foot Suntory Museum of Art confidently stands its ground. The product of architect Kengo Kuma, the Suntory does not need signage or street access to assert itself. Instead, its articulated, exterior massing, clad with elegant, ceramic fins, deftly distinguishes the museum from Tokyo Midtown’s looming, terra-cotta-covered towers. 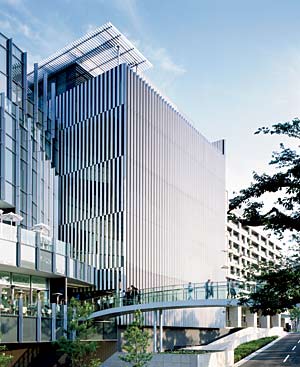 From the outside, the museum’s protruding form practically reads as an independent entity. But its interiors are fully integrated with Midtown’s multistoried shopping concourse: Visitors enter the museum on the mall’s third floor, at the northwest corner, where they find the gift shop, café, and elevators. However, the prescribed route for viewing the private collection actually begins on the fourth floor, where museumgoers arrive at a dimly lit gallery to view the works amassed by Suntory Limited, one of Japan’s largest liquor producers. The museum’s 3,000 historic objects include paintings, textiles, ceramics, and lacquer, with some designated “Important Cultural Property,” and a couple “National Treasure.”

From the main gallery, visitors descend a gracious, glass-encased stair to the third-floor atrium, a 31-foot-high space overlooking Midtown’s semicircular greenbelt park. The atrium, which is earmarked for large artworks, connects to a second gallery. Museum offices and storage fill the fifth floor, while the sixth floor holds a conference hall opening onto an outdoor deck, a members’ club, and an informal tea-ceremony room (Ryuurei) open to the public. The tearoom incorporates new and existing elements, such as the wood frame, woven cedar ceiling, and sliding paper partitions moved from the tearoom at the Suntory’s previous location.

Until the company relocated to the city’s Odaiba area in 2005, the galleries occupied the top floors of its central Tokyo headquarters. Although Suntory’s art collection and corporate offices are now separated, Kuma is responsible for designing the new homes for both. He intended this new facility to evoke traditional, residential architecture. “I didn’t want a white box,” Kuma explains. “I wanted to design a space like a private house—in terms of light, materials, and scale.”

Without quoting directly from traditional architecture, Kuma has incorporated into his design delicate, well-crafted elements such as washi paper (a paper made from fibers of tree bark), which is affixed to glass partitions; wood floors made from recycled Suntory whiskey barrels; and slatted screens of paulonia wood, the material of choice for kimono storage chests. The client was initially reluctant to build with this notoriously soft material.“But the wood’s  fragility,” argues Kuma, “conveys the intimate feeling of the home.”