After being deluged with 1,322 cocktail napkins bearing sketches from 352 architects and architecture students, Architectural Record's jury of editors has determined the winner of its first annual Cocktail Napkin Sketch Contest. 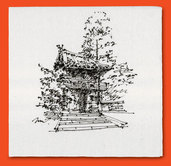 The jury picked as “the best in show” a drawing of a gate from a Japanese garden by Truc Dang Manh Nguyen, an architect from Piedmont, California. The winner has practiced for 27 years and recently opened his own office. He prefers sketching to photographing buildings. “It forces the eye to focus and the mind to work,” he says, “and it’s easier to commit a work of architecture to memory through drawing.” Nguyen found the small size of the 5-inch-square cocktail napkin to be challenging, and confesses that this is the first time he actually tried to sketch on a cocktail napkin. 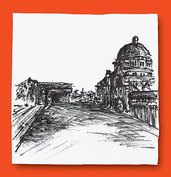 The jury awarded cocktail napkin sketches that reflect the spontaneous act of creativity underlyling this ephemeral art form. While a number of entrants treated the cocktail napkin sketch as an exercise in more time-consuming rendering, the jurors admired the artistry of these exercises and included several runners-up that belong to this category. 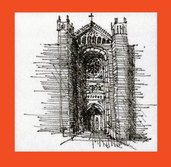 In addition to the winner and six runners-up, the RECORD editors selected additional sketches notable for their drawing techniques. 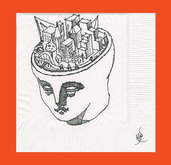 And finally, these entries caught the editors’ eyes for approaching the contest in ways that were either innovative—or out-and-out bizarre.