By Laura Raskin
A show of Polish-born architect Ania Jaworska’s work is currently on view at the Museum of Contemporary Art Chicago (MCA), running in tangent with the Biennial through January 31, 2016. It’s a coup for 36-year-old Jaworska—this is the first time that the MCA has exhibited a solo show by an architect as part of its Chicago Works series, which showcases local artists’ work. It is also clear that the museum is tiptoeing into the practice, because Jaworska’s work blurs the line between architecture and art. 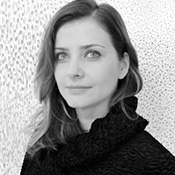 At the MCA, she presents two projects that propose would-be structures. The first is a series of all-black sculptures that incorporate elements of signage, monuments, and common architectural forms like arches and obelisks. Jaworska is interested in the invisible boundaries communicated by the built world, and these pieces­ “comment on how architecture restricts or invites,” she says.
The second part of the show is a series of screen-printed posters of fantastical columns—some are loopy, some are organic and treelike, while others borrow from pop art. None of them look as if they could provide structural support, but Jaworska works them into a proposal for a pavilion. The forms are from her Subjective Catalogue of Columns, an exercise that uses humor to poke at the long history of such iconic elements. (In 2014, Jaworska brought some of these ideas to life in her design for the interior of the Graham Foundation’s bookstore in Chicago—miniature arches, towers, columns, and staircases in expanded metal mesh became the shelving and organizational elements of the shop.)

She is also participating in a group show at the Chicago Cultural Center, a Biennial venue, which asks local architects to imagine alternative development scenarios for the city. “There is a lot of work that happened in Chicago that had an impact on architecture across the United States and beyond,” says Jaworska, a visiting assistant professor at the University of Illinois at Chicago (UIC) architecture school. The Biennial, she notes, is a forum for the city’s youngest crop of architects to “propose new approaches to the practice.”