Miriam Sitz
Order Reprints
No Comments
“We tend to relate and connect to other people through stories. We can find ways of using narrative to help us empathize with one another,” says architect and UIC instructor Grant Gibson. “I thought my firm needed to be rooted in a premise that understood and advocated for that.” In establishing CAMESgibson, 31-year-old Gibson proved his own dedication to and appreciation of a good narrative: T.E. Cames, the firm’s half-namesake, is a fictitious person with an elaborate life story that Gibson invented. This unusual creation serves as something of a litmus test for how well-matched the firm is with potential clients. “It drives some people away, but others gravitate toward it,” the architect says. “I’d rather know up front if someone’s got the interest and earnestness to dive into bigger questions of historical and cultural context.” 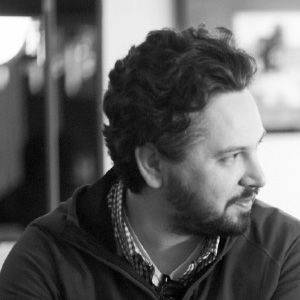 Photo courtesy CAMESgibson, Inc.
A few years ago, as part of an exhibition protesting the demolition of Bertrand Goldberg’s Prentice Women’s Hospital, the firm developed a conceptual design for a mammoth building on the adjacent plot. Through drawings reminiscent of those from a graphic novel, Gibson proposed a greenhouse-like exoskeleton that could house future academic and research buildings for the University of Chicago. “We tend to produce things that have layers to them,” Gibson says. The theoretical construction also had a cloverleaf-shaped void through its core that riffed on the Goldberg building’s form.

For the Biennial, CAMESgibson, along with Skidmore, Owings & Merrill, has designed a high-rise that aims to house middle-class people. “Many of the current methods of producing multifamily housing result in super-high-end units or mass-produced towers for the working poor. We want to develop a prototype with a flexible design that would allow residents to live there for their entire lives,” says Gibson. The building’s core would be publicly owned and maintained rather than considered a part of the building. “Our thought is that if we turn the core over to municipalities, privatization will take place only at the unit level, allowing owners the freedom to customize their spaces as they please.”

With a rotating cast of interns, CAMESgibson also undertakes built work, including a new wing for the Hyde Park Art Center that contains shared studio suites, with event spaces at either end. “The center is amping up its commitment to local up-and-coming artists,” notes Gibson.