By Laura Raskin
Paul Preissner, 41, recently made a couple of round, flat-pack tables out of mint-colored Corian. “It was the cheapest way of producing furniture with one of the most expensive materials,” says the architect, who was experimenting with the process to help out a friend who runs MakeTime, a company that lets designers share time on computer numerical control (CNC) machines. But the one-off project is also emblematic of Preissner’s interest in the unexpected. “There is something kind of funny and disrespectful with the endeavor, but it produces something deeply interesting,” he says, noting his use of a luxurious material for a simple table made in one of the least expensive, “dumbest” ways. 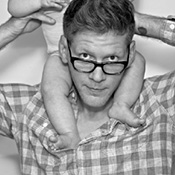 Photo © Alan Froberg
Preissner, who has worked for Peter Eisenman, Philip Johnson, and Skidmore, Owings & Merrill, was once a big believer in software and computation for problem-solving and form-finding. But, in recent years, his interest in parametric design took a dive. “It was so utterly conservative. People pretend the stakes are so high,” he says. “I wanted architecture that seemed more insignificant and stupid.” Preissner also wanted to start building things, so he took on smaller jobs. Two residential projects, for example—an apartment renovation and a modest house for a family of six, both in Chicago—fit the architect’s desire to go in the opposite direction of the enormous projects he used to manage.
For the Biennial, Preissner worked with some of his students from UIC as well as his sometime collaborator Paul Anderson, a Denver-based architect who runs the firm Independent Architecture. The team was commissioned to design a new kiosk on Lake Michigan, which is already dotted with a motley assortment of simple structures selling snacks and merchandise. Preissner says that the market-based program “bothered us a little bit.” So, in response, they conceived of a form that could be a public shelter when it wasn’t serving as a store. A single steel vault, skewed in plan, and with a blue powder coating, “looks like a weird pop-up book,” says Preissner. Its interior is divided into two triangles; one is enclosed by expanded metal screens and doors, and the other is open but still protected by the vault overhead. During the off-season, the screened portion’s doors can be pinned open to create a gathering spot. For Preissner, this collaboration was like indulging in a hobby, he says. “We hung out and made a bunch of weird models.”
Back to Chicago's Next Generation