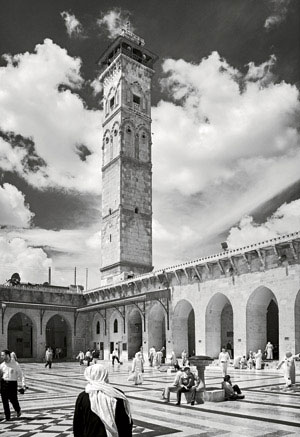 During a family vacation to Syria in 2009, architectural photographer Peter Aaron captured many of the country's landmarks—historic mosques, Roman ruins, ancient citadels. Just two years later, the violent civil war erupted between government forces and insurgents. Over the course of the crisis, the incessant fighting has torn apart a nation and its heritage. By some estimates, more than 150,000 people have died; even the United Nations has quit keeping track. Historic architectural marvels—many which have stood for more than a thousand years—have been scarred by mortar or reduced to rubble by shelling and gunfire. Aaron's lush photographs—on view at ARTspace gallery in Germantown, New York, until September 7th—are ghostly mementos of a time before the conflict. In Aleppo's Great Mosque, its stately 11th-century minaret has been completely obliterated by tank fire. A medieval hilltop citadel in the same city served as a fortress for snipers and has suffered damage from a barrage of shells. The images still haunt Aaron. “We got to know some people during our three weeks there, and we wonder what's happened to them,” Aaron says. “Are they all still alive?”