New Gehry Technologies will enable many to boldly go where only Frank has gone before. 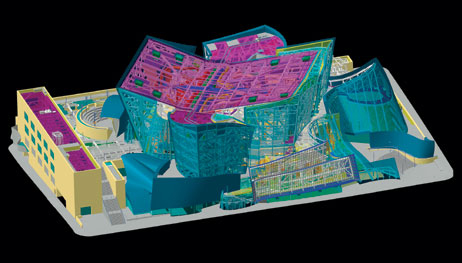 Frank O. Gehry, FAIA, is taking his expertise to the masses. This fall marks the launch of the sidekick to his architectural practice, Gehry Technologies (GT)—a business venture he hopes will raise the level of technological fluency within architectural practice, as well as cement his legacy as one of the field's foremost innovators.

Heading the new company as chief executive officer is senior partner James Glymph, who has worked alongside Gehry for more than a decade. Dennis Shelden, Gehry Partners' director of computing, will serve as GT's chief technical officer.

The vision for GT is to create a " ‘building ecosystem' tackling innovations in construction practices and associated technologies," according to a press release. Essentially, it will be a consulting practice, providing technologies and expertise to teams who are building specific projects as well as to the industry at large. "Manufacturing industries have completely transformed the way products are designed, built, and delivered," says Glymph, "but the building industry remains entrenched in a paper-based, two-dimensional world. We realized that substantial opportunities existed in bringing advances in practice that we have discovered to the rest of the industry." He adds that faster, cheaper computers make it feasible for firms of all sizes to use the digitally driven process that Gehry follows in his practice, and that the process is suitable for a variety of project types, not just the high-end cultural buildings for which Gehry is renowned.

GT may also serve as a software developer, creating specialized interfaces or additional capabilities for existing design software such as CATIA, the aerospace program the firm has used on many projects. Such tools could be developed on a project-specific basis—a common practice in manufacturing and other industries—and then licensed for a fee to the software maker for widespread use, or sold to the company paying for the project work.

The AIA, the Civil Engineering Research Foundation (CERF), and
the Massachusetts Institute of Technology's Media Laboratory have already agreed to collaborate with GT; the projects they will take on together have yet to be fully scoped. In time, the company hopes to create partnerships with the entire range of organizations that have a stake in the design and construction of the built environment.

What Glymph wants to achieve is "a fundamental reshuffling of the roles, responsibilities, and compensation structures for participants across the industry as a consequence of the digital revolution," he says. This could mean, for instance, that all participants in a construction project share the liability for its completion on time and within budget, or that project deliverables be submitted in digital rather than paper form. Many technology enthusiasts believe that requiring architects and their collaborators to rely on digital design information is a necessary step toward reestablishing the architect as a master builder, as well as shortening the time needed to design and construct buildings.

Whether the business model for GT can succeed in a down-market for design and construction services has yet to be determined—firms aren't spending on training and technology like they once were. But like many innovators, Glymph and his staff aren't cowed. "We've been pretty lonely pioneers," he says.

Gehry Technologies Spins Off Its Software and Services Businesses