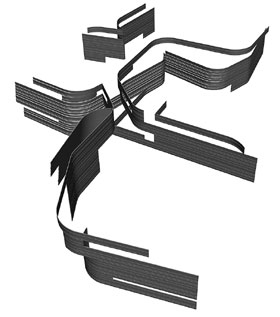 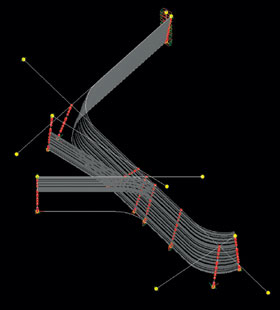 Some architects can program computers, some programmers are architects—but having the one skill shouldn't mean having to have the other, says CAD pioneer Robert Aish, Bentley Systems' director of research. New parametric design software he has developed, GenerativeComponents (formerly CustomObjects) is poised to allow even technophobes to harness computing power for customized designs.

GenerativeComponents lets designers create rules for a project—for example, a complex stadium roof of known dimensions and curvature—and form specialized components to be used to construct it. These components then "populate" a design that's generated automatically according to the rule. If the rule changes—if the designer modifies the roof's span or curvature—so too do the shape, orientation, and behavior of all its component parts, much like changing a formula in a spreadsheet affects all the values on which that formula is based.

"This process enables architects to explore design alternatives more quickly and capture geometric relationships," says Aish. This is not the case with traditional CAD, in which elements such as walls and windows are merely graphical representations of building parts. It also differs significantly from parametric programs like Autodesk's Revit, whose chief benefit is production efficiency achieved by embedding non-design information like cost and manufacturer into well-understood building components like doors. Aish has been vetting his tool for two years with a collective he helped found, the SmartGeometry Group, whose tagline—"Architectural design with computational design tools"—elegantly articulates a fundamental challenge of the CAD era. Last summer the group convened in Cambridge, England to put the tool through its paces and to educate a larger audience of early adopters. Bentley plans to integrate Generative Components into their signature CAD program, MicroStation, in 2004.

Above all, Aish wants to introduce freedom of expression in an era of digital fabrication and mass customization. Users who want to create complex sculptural forms can still do custom programming within the software, although, "if exploring modifications to a design takes too long," he says, "you just exhaust people."