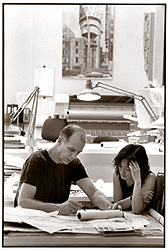 The works of Tod Williams, FAIA, and Billie Tsien beg to be touched. Walk up to their Neurosciences Institute in La Jolla, Calif., and you find yourself running a hand over the low-slung building’s long concrete walls, which have been softened by heavy sandblasting to expose their blue-green aggregate. Or go inside their addition to the Phoenix Art Museum and compare the smoothness of a grand limestone stair with that of its cast-in-place concrete mate. The architects bring out the timeless qualities of materials such as stone, concrete, steel, glass, and wood, and they experiment with newer ones such as Homasote, plastic laminates, and resins. Theirs is a tactile architecture.

Having worked together since 1977 and been partners since 1986, Williams and Tsien (who are married to each other) have developed a practice known for its lyrical designs that bring out the humanity in institutional buildings and highlight the poetic in residential ones.

Although many of their projects involve the arts, the architects have tackled a broad range of commissions. They have designed sets and costumes for the Elisa Monte Dance Company, an installation for Isamu Noguchi light sculptures, swimming pools for educational institutions, college dormitories, houses, lofts, and museums. They describe their work as emphasizing “the importance of place and explor[ing] the nature of materials.” The mission statement for their office states, “Whatever we design must be of use, but at the same time transcend its use. It must be rooted in time and site and client needs, but it must transcend time and site and client needs.”

Early in his career Williams worked for Richard Meier, while Tsien spent several years as a painter before completing her architectural studies. Today, the couple is finishing work on the Museum of American Folk Art in New York City and the Student Arts Center at Johns Hopkins University in Baltimore, both of which will open this year. In 2000 the Monacelli Press published a monograph on Williams and Tsien, entitled Work/Life. record senior editor Clifford Pearson caught up with the architects recently and spoke to them about materials and architecture.

Architectural Record: The cover of your new book has a close-up photo of the cast-metal panels that will clad the main facade of the Museum of American Folk Art on 53rd Street. The book cover and your buildings themselves send a message about the importance of materials. Could you explain how you go about selecting and using materials?

Tod Williams: I’ve heard people say, “Oh, Williams and Tsien, they’re experimenting with materials.” They seem to think we go to the closet, set out a bunch of materials, and see what happens. We do almost the opposite. We try to hold the materials at bay for as long as possible. We keep asking ourselves what is the right material. And the right one is not found by going into a box and just picking something out.

Billie Tsien: It comes slowly. And requires a lot of very boring problem solving. Someone in our office might say, “Let’s try fiberglass.” Tod and I will reply, “Okay, then you’d better figure out how to make it fire-retardant.” Once they make it fire-retardant, then it doesn’t look like fiberglass anymore. So people in our office will send things to fabricators, asking if they would make samples. Things go back and forth, back and forth. There’s a great deal of struggle. It’s not just picking stuff out of the storage room. Materials emerge from a particular place and from some very dull grunt work.

TW: We think about materials for a building as much from the inside going out, as from the outside going in.

BT: We start with what is particular to a problem. For example, with the folk art museum, which right now has a very strong presence, we tried to find a material that would be unique in a certain way and would have a sense of the human hand being involved in making it. Now it’s true that all manufactured materials have some hand involved, but it’s not always so visible. The challenge was to establish a direct relationship between what you see and how it was made, so you make a connection between the hand and the finished object.

But the material, Tombasil, is fascinating. And so is the process of fabricating the panels.

BT: The material fabrication is connected to the meaning of the museum. This is a building that exhibits art by people who are not trained as artists. It’s about a direct translation of vision through hands.

TW: We see the people at the foundry who made the panels, Peter Sylvester, Vinnie Nardone, and Peter Holmstead, as the artists, and we’re the ones who assembled their panels for the facade.

How did you arrive at the decision to use Tombasil?

TW: Our first idea was to try to cast a concrete facade directly on the street, to use the imprint of 53rd Street as the facade. That would have been extremely interesting, but rather disruptive to traffic. We didn’t get a very positive response from the folk art board to the idea of making the facade of cast concrete. So we looked to other materials. We thought of aluminum because aluminum can have some sparkle and shine and it is ordinary enough to be affordable. But once we melted an ingot [of aluminum] and then cast it, it was no longer shiny. It became rather dull and didn’t look like aluminum. So we said, “Let’s look at something that’s not aluminum and not copper, but maybe a mix of the two.” Through a series of investigations, we learned about Tombasil, which is a form of white bronze.

BT: It’s used for boat propellers and fire-hose nozzles, so it can deal with weather. We took the Tombasil to an art foundry because they’re used to dealing with . . .

BT: We had to work out a lot of technical difficulties because when Pete poured the Tombasil on the concrete floor, the air in the concrete and the moisture caused tiny explosions. We destroyed the floor, but we had some interesting panels. Eventually, we figured out how to pour and cast the material in a controlled way.

That’s a lot of work to get the right material. Is this something that a typical architect can afford to do?

TW: Because this is a public, spectacular building, our process was perhaps more intense than usual. But I think in various ways, all architects can do it. And it doesn’t have to stop here with this project. It’s a baton that one carries and passes to the next architect. Just as titanium panels didn’t start with Frank Gehry and shouldn’t stop with Frank Gehry.

Are there certain materials you would like to work with that you haven’t yet?

TW: Every one on the surface of the earth. They’re all interesting and we try to learn from other architects. We go down to Tucson and see Rick Joy’s house and we’re envious. We go to see Peter Zumthor’s work in Switzerland and we’re envious. And it’s not just the Tombasils and titaniums that are interesting. Something as common as house paint can be exciting when polished to a mirror finish—as we saw recently in a piece of art in the show Open Ends at MoMA.

You’ve said your work must be rooted in time and site. Explain how that relates to materials.

TW: We feel that buildings in general should be connected to the ground, the earth. We think of buildings in terms of heavy and light. There is a notion these days that architecture is increasingly becoming lighter. But I don’t believe it one bit. It’s just an illusion of lightness. Buildings are heavy. I haven’t met a building I could lift.

BT: I think what we’re always looking for is a weightiness—a pressing down—and then a release. We did this at the natatorium at Cranbrook [School of Art], which has a stone floor and is concrete block on the inside. The pool itself is excavated from a hillside. The materials are certainly about durability. But when you look up toward the ceiling, there is that very intense color and the oculus with light coming in, so you get a sort of flight. It’s both roots and wings. We know that materials can be evocative; they can bear emotional weight.

TW: We’re doing something similar with our amphitheater in Guadalajara [june 1999, page 136], which is pushed into the land.

BT: It has the sense of a giant earthwork with battered walls, which are rooted, of course, in the Aztec and Mayan traditions there. We’re trying to think about materials that make sense in the place where we’ll be building. This is the first time we’re working outside the U.S., so the architecture has to have a sense of the climate and be appropriate for the place.

TW: The seating is ground-based, so it’s seen as a kind of land form. And there’s a very big roof that is both light and heavy. On the underside of the roof, we’re using an expanded-metal mesh that we’ve seen in Mexico as a fencing material.

BT: The stuff is really cheap, very crude, and made in Mexico.

TW: The material itself weighs seven pounds per square foot or so. If you look at it straight on, it’s maybe 85 percent transparent. But from an angle it looks almost solid. So is it light or is it heavy?

BT: An important value for us is drawing together all of the various elements of architecture—materials, space, form, light, color—and producing a unified whole. We’re not at all interested in producing a collage. People’s lives are the collage and you don’t need a collage on top of a collage. You need to provide some sense of wholeness so the kaleidoscope can occur within it.

TW: The issue of the hybrid is interesting. It’s not wrong to recognize that odd partners can come together. We’re a perfect example of that ourselves. But I think it’s very, very important that one show restraint in order to let certain things come to the fore and have some force and authority.