Following carbon footprints leads architects and consultants to their own doorsteps. 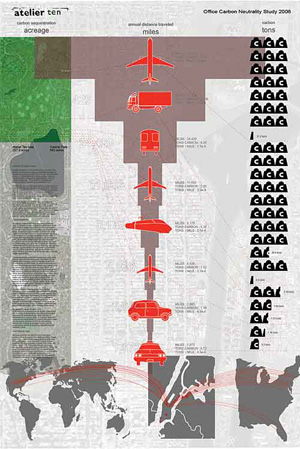 Last month’s declaration by a United Nations panel that global warming is “unequivocal,” and that fossil fuel use is “very likely” to blame, should intensify discussion of the already hot topic. Of course, many “green” architects and their consultants were already focused on the issue, not only in relationship to the buildings they design, but also in regard to their own business practices.

Last month’s declaration by a United Nations panel that global warming is “unequivocal,” and that fossil fuel use is “very likely” to blame, should intensify discussion of the already hot topic. Of course, many “green” architects and their consultants were already focused on the issue, not only in relationship to the buildings they design, but also in regard to their own business practices.

Several firms have developed, or are developing, sustainable operations plans for their offices that include minimization of greenhouse gases, primarily carbon dioxide (CO2), as part of their larger missions. “It fits with our mindset and philosophy,” says Rebecca Tannebring, New York City office manager for environmental consultant Atelier Ten.

To shrink the CO2 footprint of their own work spaces, architects and their consultants rely on many of the same strategies they employ in the buildings they design, including daylighting, energy efficient office equipment, and lighting controls such as occupancy sensors. Many firms reduce transportation-related sources of greenhouse gases by eliminating unnecessary business travel and by a variety of programs aimed at making commuting by mass transit a more attractive option.

After reigning in the operational activities associated with greenhouse gas emissions, to come closer to the brass ring of carbon neutrality firms typically participate in “offsets.” This process entails investing, through a third-party provider, in projects that reduce greenhouse gas emissions, such as tree planting, or construction of wind and solar energy facilities.

In order to determine how many offsets to buy, businesses typically conduct an inventory of emissions. And, as part of this accounting task, they must decide which greenhouse gas generating activities to include and which to exclude. A CO2 inventory could conceivably take into account the carbon embedded in office supplies, such as paper and toner, and that generated by outsourced activities, such as printing and shipping. But few, if any firms, are conducting inventories so fine-grained.

Although the boundaries of greenhouse gas inventories vary from firm to firm, among those interviewed for this article, it was common to include electricity use, fuel associated with heating and cooling, and business-related travel. Some go even further. Cook+Fox includes employees’ home electricity consumption estimated through a sampling of staff utility bills, according to Alice Hartley, a member of the firm’s “green team.” The firm purchases renewable energy credits for this electricity use and for that used by its New York City office.

However, including employees’ home power use within the boundaries of a greenhouse gas inventory is highly unusual. Most firms track only that electricity consumed by the operations of their office spaces. This bookkeeping task, especially for large, multilocation practices with a variety of tenancy situations, can be demanding. Perkins+Will, for example, has been following electricity consumption at its 20 North American locations for 18 months. The firm owns some of these spaces and rents others. Some have dedicated meters and others do not. The diversity of arrangements “adds a layer of complexity,” says Chicago-based Gavin Smith, AIA, a project architect with the firm.

For keeping track of air travel, which can account for a huge share of a firm’s emissions, sources have different approaches. Some depend on employees to report air mileage and tie the process directly to the expense-reporting system. Others, like Seattle-based Mithun, depend on one agency for both travel arrangements and for managing the related record keeping, according to Bert Gregory, FAIA, president and C.E.O.

The protocols for determining the amount of CO2 associated with power use, air travel, and other activities, are still not mature. “It’s an emerging area,” says Smith. Perkins+Will, along with many other firms, depends on a greenhouse gas accounting standard developed by the World Business Council for Sustainable Development and the World Resources Institute (www.ghgprotocol.org).

Sources point out that inventories are not static and that regular updates and adjustments are important, especially for quickly growing firms. “It’s a continuous process,” says Atlelier Ten’s Tannebring. The firm recently completed a calculation of its CO2 emissions for the 12-month period ending in April 2006, and is now investigating offset options.

None of the firms interviewed would discuss how much the reduction, record keeping, and offset process adds to overhead. However, some of the expenses can be treated as reimbursable, as any project-related expense would. Cook+Fox, for example, uses a car service with a gas- electric hybrid fleet when travel by mass transit doesn’t make sense. The service, which comes at a slight premium over taxis, is identified as a reimbursable in contracts, helping develop awareness among clients about greenhouse gases and global warming, says Hartley.

Conference examines a single material's properties and its inherent ironies