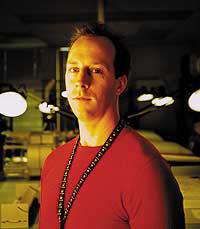 Three years ago, 1994 Rome Prize in Architecture winner Garrett Finney was happily designing furniture in New York City when a former classmate from the Yale School of Architecture called him to see if he was interested in becoming part of a new NASA program. With dreams of designing on Mars, he applied. Now senior architect at the Habitability Design Center of the Johnson Space Center in Houston, he works on designs for the Habitation Module of the International Space Station. A native of Philadelphia, Finney has spent time on this planet as a blacksmith, a carpenter—and he has designed not only furniture, but also houses and both residential and commercial interiors.

How is your job different from that of an “earthbound” architect?

Architects often say how difficult it is to be a designer in a developer’s world. As a designer in an engineer’s world, I contend with the fact that most of those creating the space station are primarily concerned with the function of critical systems and safety and not so much with the human interface. Everything at NASA is built to performance specifications, which require, basically, that everything function. What these specs leave out are the manner and ease of this function and, certainly, aesthetics. Together these are called “habitability” at NASA, and they are what I look out for and design to. The International Space Station (ISS) is first and foremost a place for science. To get the most out of this laboratory, we need a productive crew. As a happy crew is a productive crew, it therefore makes sense to pay closer attention to their surroundings than has been done previously.

We learn about these issues by studying our previous spaceflight experience, particularly Russia’s MIR program; talking with astronauts; and researching analogous situations, such as the environments of arctic research stations and submarines. To make their spaces more “habitable,” I have to take into consideration all the constraints that are part of space travel. These include how items are made and of what materials, issues of flammability and off-gassing, how they are packed and launched, the launch environment, the effects of radiation, life-cycle costs, and many others. Finally, the most important consideration is that astronauts are people and have normal peoplelike needs.

What can architects learn from your experience?

In space, nothing is taken for granted. Working at NASA really makes you aware of how much we assume when designing for Earth, from the simple act of breathing to the sheer availability of products from around the world to seeing how systems of all sorts interact. I think buildings need to perform as well as possible. Why is it so uncommon to take into account the environment you are building in and adapt the building to it? While this seems obvious, it must not be, because it is clearly not done. For example, here in Houston so many houses are built with no consideration of how to keep them naturally cool. Instead, everyone leans heavily on the air conditioner instead of designing to minimize its use.

What is your mission, as an architect?

We’re sending people to an extremely hostile environment, and we still have to allow them to be people. This becomes more and more important the longer a mission might be, as astronauts start to live in space and are not just hacking it for a time. Going to Mars might be a three-year mission, which is a long time to spend even with your five best friends.