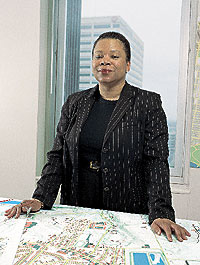 When the Philadelphia City Planning Commission’s executive director, Maxine Griffith, was serving in the Clinton administration as HUD’s assistant deputy secretary, somebody once said that she was “either a spokesperson for the new paradigm or she just can’t keep a job.” It may be a bit of both. Since receiving her master’s degree in architecture from UC Berkeley, Griffith has had a steady stream of planning, design, and development jobs that have made her an important mover and shaper of U.S. cities and regions, such as Oakland, California; New York City; New Jersey; and Washington, D.C. In her current position, Griffith is meeting the challenges of reinventing a troubled Philadelphia head-on.

What is the current planning challenge facing Philadelphia?

Philadelphia is the nation’s fifth-largest city, and one of its oldest. The city is now faced with demolishing and rebuilding some 30,000 decrepit buildings, as well as clearing some 30,000 vacant lots. Couple that with the sometimes complex ownership structures these areas have, and you have a major problem. Our previous mayor, Edward Rendell, was also dedicated to a revitalization effort, one that was concentrated downtown. His accomplishments are clear— downtown Philadelphia is beautiful, livable, and getting better all the time. Now we have to concentrate on the surrounding blighted areas, which are often clustered together. Luckily, Mayor [John] Street is dedicated to taking this on, and in the past two years we’ve accomplished a lot. The plan that’s in place is called the Neighborhood Transformation Initiative (NTI). Mayor Street is very much involved in making this initiative a success. In fact, he began his administration by getting 20,000 abandoned cars off the streets. No small task.

How much money is the city willing to put into the effort of demolishing and rebuilding?

We have approximately $290 million to accomplish this. It’s a problem that has been building for the past 50 years. We’ll just accomplish this one building at a time, integrating new transportation initiatives along with the redevelopment. Two years into the program, we’ve cleared 4,000 vacant lots and demolished many decrepit buildings.

How can architects get involved?

My department is committed to having architects become very much a part of the transformation effort. Right now, the urban design unit has a call to architects and universities to help us plan. We’ll supply maps, neighborhood information, census reports, and various technical information. We’re hoping firms might choose to do something like “adopt a neighborhood” and then give us recommendations on a particular area—including parks and open-space planning. We’ll accept submissions from the professional design and planning community to help us plan accordingly. We need universities and the professional design community to see this situation as an opportunity to really help us make a world-class city out of Philadelphia.