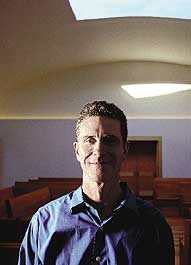 Frank “Chip” Briscoe has politics in his blood and preservation on his mind. Born to a Texas political dynasty—his father was a district attorney, his cousin a governor—he got his feet wet last spring by challenging the congressional seat held by House majority whip Tom DeLay (he lost the Democratic primary by a razor-thin margin). In April, he visited Pakistan, where he has been working with an international team to uncover a 4,500-year-old city. All this while working for veteran Houston builders W.S. Bellows, which built the Live Oak Friends Meeting House (above). Trained in historic preservation at Cornell, Briscoe and his wife live near Houston in a family farmhouse he’s restored himself.

What are the goals of your work in Pakistan?

My primary role is to work with the Pakistanis, through UNESCO [United Nations Educational, Scientific and Cultural Organization] to assist with the conservation of the ruins of Moenjodaro. Moenjodaro is one of the capitals of the Indus Civilization, in the valley of the Indus River. I’ve been going there since 1995. It’s an enormously important place in the history of civilization. It’s the oldest planned city in the world and the largest Bronze Age city that we know of. Its water distribution system was the most advanced of its time and included indoor plumbing and one of the first uses of wells. We believe Moenjodaro and its sister capital, Harappa, are the first places in the world where baked industrial brick was used.

Only about 10 percent of the site has been excavated, and there’s a prohibition on further excavation until the exposed ruins are stabilized. We still have a lot to learn about the way the city was planned. For instance, we haven’t found definitive evidence of any kind of defense structure, which is interesting, because the Indus River was a transportation corridor.

What was your latest visit like, given recent events?

People here thought I was crazy to go. But I’ve known the team working there for quite some time now, and I’ve always been very warmly received. My relationship with them hasn’t changed. It’s very satisfying to be involved in this project. I hope to stay involved if the political situation allows it.

Why did you decide to run for Congress?

I ran primarily to promote a smart-growth agenda for my district. We’ve got to be among the worst offenders in terms of the way resources are used here. It’s deplorable that we’re not even beginning to work toward sustainable growth. Traffic congestion and sprawl have gotten terrible. For instance, there’s a proposed expansion of the Katy Freeway that connects Houston to its western suburbs. It’s now about 13 lanes wide; the plan is to almost double it, with all passenger vehicles, no plans for public transportation. There’s growing opposition to the lack of transit options, and it’s supported in part by air-quality standards that have to be considered when you widen freeways.

We also need to be much more considerate of the environment when we design and build things. I’m looking forward to being part of the move toward sustainable design in my job as a builder.

Would you run for office again?

I would consider it, although I don’t have any plans to. Running for office was a wonderful experience. I met a lot of people doing very important work. Politics was always a very personal thing to me growing up, because of my family’s involvement. What pushed me to run was that I was really riled up after September 11, among other things. I hope it doesn’t take something like that to make me try it again.