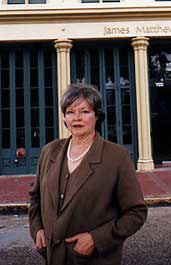 Any major urban city in this country would be fortunate to have Patricia Gay at the helm of its preservation organization. As it happens, New Orleans has the luck. As executive director of the Preservation Resource Center (PRC) of New Orleans, Gay relies less on luck and more on hard work and persistence to convince developers, politicians, and the general public that urban revitalization and preservation of historic architecture and neighborhoods is crucial to the health and welfare of the Big Easy. Passionately committed to preservation, Gay has been with the PRC since its inception in 1974. She plays a big part in the organization’s main focus—finding buyers for historic buildings.

How does New Orleans’s Preservation Resource Center work with architects?

I’d like to think that we’re “friends of architects.” It’s buildings that give cities their identity, especially in New Orleans. We have many programs in place to inform people about architecture—programs such as “Where They Lived,” which is an initiative to inform the public about historic houses once occupied by jazz musicians. Many of those houses are for sale, and, if they wish, we’ll help interested people get in touch with owners. Preservation in Print, the monthly magazine we publish with the Louisiana State Historic Preservation Office, is full of interesting information about architecture in New Orleans. When people know the difference between a Creole cottage and a shotgun house, they’re more likely to appreciate the architecture of the region, and more likely to want to preserve historic neighborhoods and buildings. Also, since one of the main things we do is try to match people up with historic buildings, we encourage buyers to use architects to renovate.

What makes neighborhoods and buildings in New Orleans special?

Every city should have a strong preservation effort. That said, New Orleans has an amazing history, as a city. It is a place where the European approach to living was really established. It was laid out by the French in a typical French military camp plan that still remains today in the Vieux Carré, then it was occupied by the Spanish until the Louisiana Purchase made it the fifth-largest city in the country. It was also the second-largest port after New York, so it always had a very international flavor, and the architecture is very unique in this country.

When, and why, did you get involved in the PRC?

We do like developers. Especially the ones who donate the facades of their historic buildings to our Facade Donation Program. They get a tax deduction, and the PRC is then able to review all renovation propositions in perpetuity. There are so many developers and owners that we work with who understand how valuable their property is in terms of preservation.

What gratifies you the most?

Probably winning a fight for a building—keeping it from being demolished. Or watching a neighborhood come back. Cities have been making a comeback, you know. It’s exciting.