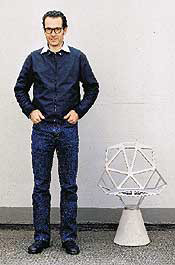 From tables and chairs to buckets and shoe racks, the young German designer Konstantin Grcic (pronounced gir-chic) has an ability to inject both beauty and wit into the objects he creates. The designer whom the legendary Achille Castiglioni calls his “spiritual heir,” Grcic was recently honored with the prestigious Compasso D’Oro prize for his May Day lamp (designed for Flos in 1998). Earlier this year, he curated an exhibition at the Busch-Reisinger Museum at Harvard University called Goethe/Grcic: Quotidian Objects. In the show, organized by the Casa di Goethe in Rome, Grcic displayed everyday objects, like buttons and paperweights, that once belonged to Germany’s foremost poet, Johann Wolfgang von Goethe.

Goethe was one of the first men in history to enjoy celebrity status during his own lifetime. Why then did you choose to include such seemingly trivial items in an exhibition on such an important figure?

The museum in Rome was very interested in including the usual sort of objects for this type of show—his clothing and writing instruments, for example. But I wasn’t interested in those kinds of fetishistic objects; I’d rather have a cork on a string or a broken piece of wood. The appeal of an object for me has nothing to do with its age or material value, and even less to do with the fame of its former owner. Goethe was a great writer but also a great traveler and a manic collector.

On a more personal note, you and Philippe Starck were the first non-Italians to win the Compasso D’Oro. Was it a surprise?

Last year, for the first time, they opened the doors for a foreigner like me who doesn’t live in Italy. It’s very flattering. But it’s just as nice for me to see people who don’t really think about design so much, who buy products without knowing the designer or how important a designer’s name attached to a product is. Sometimes I will come into somebody’s flat and under their desk, without knowing it, they have a wastepaper bin that I designed. [To see that] I think is a really great kind of award.

How many projects do you usually work on at a time?

Let’s say 10, but some projects are so slow we don’t have to do anything with them for half a year. That’s also why I love working in this industry. There’s always a period when we work on a project, then give it to the manufacturer, and for the next three months or so they’ll work on it. Then they give it back to us, but in the meantime we can do other things.

Have you ever been disappointed with the way something has turned out?

Is this due to problems of production?

[It is due to] many things, including problems of production. But I always think that those kinds of problems can be turned into something positive if there is an opportunity to really discuss why it is a problem and how we can solve it.

Manufacturers always approach you with a specific object they would like you to design for them. If given the opportunity, is there anything you would like to design? [After hesitating for a moment, he responds with a smile …]