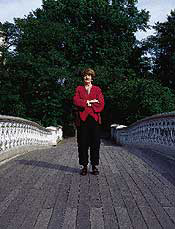 Thanks to the efforts of Elizabeth Barlow Rogers, Frederick Law Olmsted’s vision for New York’s Central Park lives on for future generations. A resident of the city since 1964, Rogers was the first person to hold the title of Central Park Administrator, a position she assumed in 1979. The following year, she founded and served as first president of the Central Park Conservancy, created to bring citizen support to Central Park restoration and management. She stepped down from the conservancy in 1996. This fall, she developed a new curriculum as the first director of Garden History and Landscape Studies at the Bard Graduate Center for Studies in the Decorative Arts, Design, and Culture in New York City.

Tell me about the new curriculum that you have begun in your role as director of Garden History and Landscape Studies at Bard.

We are breaking new ground here—it’s about the future and caring about place. You cannot study landscape design without learning about literature and history and philosophy. Other schools have landscape survey courses, and we have those as well, on the English garden, Baroque garden, and others. But we also have a course just on Central Park, including its management techniques and rebuilding methodology. We have a course called “Reading the Landscape” that will be about the work of landscape architects and designers. So it’s very new, and it’s very exciting to be creating something from scratch.

The Central Park Conservancy involves private funds supporting public space. It’s an interesting marriage of maintenance of the public realm with fund-raising. Is there any concern that the private realm may have too much of a role in the care of what should be public space?

Now there’s a question that drives me crazy every time, but I’m glad you asked it! It’s really based on results, and I don’t think that the issue of rich people coming in and taking over Central Park has gone very far. If the city had sufficient funds to care for the park, that would be ideal, but it doesn’t. The Conservancy has a track record that is admirable, and the city is very pleased that the money is being raised privately and the park looks so good.

What are your hopes for the future of the World Trade Center site?

I don’t think those initial designs were so great. My hope is that there will be a poetic sort of place—something very serious and beautiful. When I think of the poetics of place, I think of monuments such as the Vietnam Veteran’s Memorial, places that actually move people because they’ve been done with great sincerity and a kind of poetry. Process and community dialogue are very important, but my hope is that somebody of great imagination and talent can do something that will not get so chewed up in the process. What is needed is a grand vision that goes beyond commercial needs.

Your book Landscape Design: A Cultural and Architectural History was published in 2001 (Harry N. Abrams). There have been a number of books on landscape—how does yours stand out?

What I tried was to write the history of landscape from a cultural perspective—understanding the cultural dimensions of landscape is very important. There are certain broad themes that are played out in architecture, painting, music, literature, and in landscape design. None of us can inhabit the past, but we can think about the forces that made cultures do what they did, in the way they did it.