Writing about 10 Hudson Yards now is a bit like writing about one hand clapping,” says William Pedersen, a founding partner of Kohn Pedersen Fox Associates (KPF) and lead designer of the new skyscraper. He sees it as one-half of a grand urban gesture, with the other half being its future, taller neighbor, 30 Hudson Yards, currently only partially completed. Together, the two KPF towers, developed by the Related Companies with Oxford Properties, will radically alter the Manhattan skyline and help anchor Hudson Yards, the ambitious new 28-acre mixed-use district now being built over an active rail yard on the island’s far west side, along the Hudson River.

Unlike Minoru Yamasaki’s twin towers at the old World Trade Center, a pair of identical, emphatic objects at the tip of Manhattan, 10 and 30 Hudson Yards will have a more complex relationship to one another, as well as to the rest of the city. At 900 feet tall, 10 Hudson Yards slopes on its west elevation, facing the Hudson River—to meet the city’s zoning setback requirements—while its 1,300-foot-tall companion will present a flat elevation to the river and a slanted facade toward the east, with a cantilevered skydeck offering dramatic city views. A large, eight-story retail podium will connect the buildings. Both towers will feature angled crowns that point to one another: their related but opposing profiles will create a “V” shape that will widen and narrow depending on one’s vantage point, placing them, says Pedersen, “in a kind of dance.”

The entirety of this skyline gesture will not be evident until 30 Hudson Yards finishes construction and the rest of the development emerges, sometime in the 2020s. With a master plan by KPF, the neighborhood—larger than Rockefeller Center—will include 14 residential and commercial skyscrapers, by Skidmore, Owings & Merrill and Foster + Partners, among others, as well as parkland designed by such landscape architects as Michael Van Valkenburgh Associates. But No. 10’s impact on the multilevel site and its surroundings is already apparent. At its southeast corner, a lobby is tucked under the north end of the High Line elevated park. The space houses three banks of escalators, one of which leads to an individual lobby for the apparel brand Coach, the building’s anchor tenant, while the other two lead to a shared lobby for the additional tenants, including L’Oreal and the technology company SAP. The Coach lobby is lined with pale wood paneling, while the shared-lobby walls are clad in textured cast-aluminum panels, which KPF chose to allude to the area’s industrial past. Stretching along 30th Street under the High Line, a new food hall will activate the street below.

At the High Line level, two stories above grade, park visitors will be able to walk seamlessly onto a new plaza, designed by Nelson Byrd Woltz Landscape Architects. The Coach lobby is flanked by the plaza entrance to the east and Diller Scofidio + Renfro and Rockwell Group’s multidisciplinary arts venue, the Shed, rising to the west. A pair of giant legs, clad in translucent gray glass, supports the building over “the spur,” a branch of the High Line not yet opened to the public. From here, you can see the vast Coach lobby, with a huge electronic billboard of Coach ads and a multistory vitrine showcasing vintage handbags.

At 1.8 million square feet, 10 Hudson Yards packs a lot of rentable space into 52 stories (the structure rises to 54 stories, including mechanical floors). Though the building appears quite bulky from 10th Avenue, it is more modulated when viewed from the High Line and the new plaza. Several different facade treatments and setbacks break up the bulk and subtly define different tenant zones within the building. The lower level features a “shingled” facade of layered and angled glass panels, the result of a collaboration with Reed Krakoff, former creative director of Coach, according to Marianne Kwok, a director at KPF. “He felt it was a very American design idea, the notion of the shingle,” she says. “He thought it fit very well with the Coach brand.”

Inside the building, a 15-story atrium in the Coach offices looks out over the plaza and provides floor-to-floor connections. Informal meeting areas and double-height conference rooms are inserted within the atrium, animating the space throughout the day (Studios Architecture designed the office interiors). On the 23rd floor, an outdoor terrace tops the setback.

The building’s all-concrete structure, rather than the typical concrete and steel for New York office buildings, shortened the construction schedule, according to Kwok. This extended the time KPF could work on design, allowing elements like two more sky terraces to be added to the upper setbacks in response to tenant feedback. “It’s a spec building that feels like a building that was custom-designed for its tenants,” Kwok says.

Ten Hudson Yards is 100 percent leased, and Pedersen and Kwok believe the entire development is drawing strong interest from tenants (CNN and HBO are among those that have already signed to move into No. 30) because of the location, open space, and mix of uses. “People want access to parks, to dining and shopping, as well as hotels and residences. Hudson Yards will have all of that.” Looking out from the upper floors of 10 Hudson Yards, it is easy to understand their vision. “We are stitching the city together with the river,” Pedersen says. It’s a grand urban gesture, to say the least. 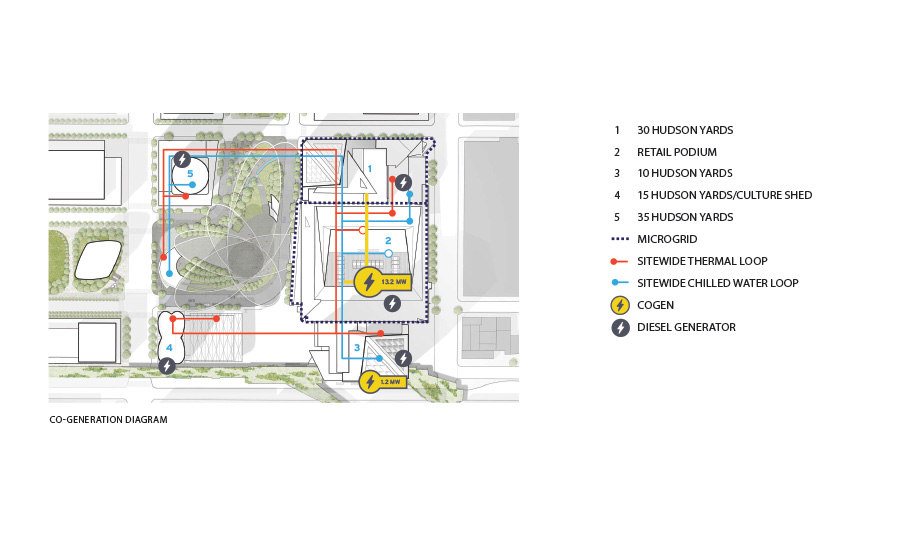 Rising 72 feet above the eight-story retail podium at 20 Hudson Yards, a co-generation plant will generate 13.2 megawatts of electricity and use the heat produced as a byproduct to provide hot water and chilled water for cooling. According to KPF, 13.2 megawatts is enough to power 2 million LED lightbulbs. The plant will serve 10, 20, and 30 Hudson Yards, all designed by KPF; 35 Hudson Yards by Skidmore, Owings & Merrill; 15 Hudson Yards and the Culture Shed, both by Diller Scofidio + Renfro with Rockwell Group. All will be linked by a micro-grid that ties into the New York City electric grid, but can also function independently from it during a blackout, in so-called “island mode.” After Hurricane Sandy, which flooded the site with several feet of water, the developer Related decided co-generation would be a part of Hudson Yards, says David Cunning­ham, the KPF project manager for 20 Hudson Yards. If power goes out across the city, the plant will still operate because it will generate electricity from natural gas. If the natural gas link is severed or turned off, it can run in “black start mode,” meaning it can function for a time with stored energy. While KPF and their consultants, including R.G. Vanderweil Engi­neers, Source One, and JB&B, spent a lot of time on the technical and performance capabilities of the plant, the architects also wanted to make sure that it will be appealing to the thousands of workers and residents looking down on it from the surrounding towers. Perforated metal screens will conceal cooling towers and flues. “We wanted it to be a good neighbor,” says Cunningham.