A Fan of the Arts

In addition to eliciting chuckles with its cheeky name, Big Ass Fans drew much attention when it debuted its first collection of attractive, efficient, and, well, big-ass commercial fans in 1999. But in 2012, the Lexington, Kentucky–based company—now known as Big Ass Solutions—made even bigger waves with a modern and sculptural line called Haiku. In the latest twist, the man­u­facturer has updated these bestselling ceiling fans by turning their airfoils into triptych canvases.

Sidebar: Every Breath You Take

The Artisan collection fea­tures screen­­printed versions of seven original works created by local artists. Available on the 60- and 84-inch-diameter models, the repro­ductions boast all the functionality that the company’s fans afford, including an integrated motion sensor and mobile-app control. Each artwork exudes a different character to suit a range of residential and commer­cial interiors. Hunter and Amelia Stamps’s Flying Machine, for instance, with its Leonardo da Vinci–inspired drawings of old-fashioned airplanes, hot-air balloons, and bird’s wings, would suit a child’s room. Luke Achterberg’s Dapper Delineation, whose red racing lines reference tricked-out hot rods, would lend a splash of color to a res­taurant or office space. The artists receive royalties on the sales of their fans as well as greater public exposure.

“The Artisan collection is our flagship method for inspiring people to think about their ceiling as the fifth wall,” explains company spokesperson Josh Kegley. The fans provide ways to “bring works of kinetic art into homes and businesses,” he adds.

Every Breath You Take 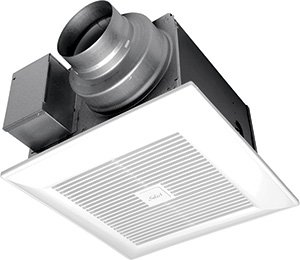 The company’s WhisperGreen Select ventilation fan is the first item to be integrated into the system. 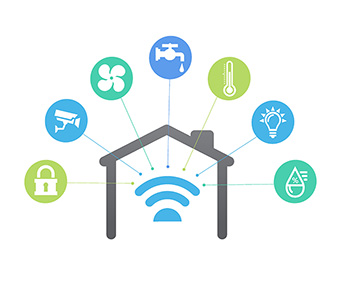 Panasonic’s nascent Smart Home IAQ system will eventually serve as a platform for monitoring and controlling a building’s security, lighting, temperature, and fresh-air intake, among other things.

Today’s smart-home market is flooded with connected security and HVAC auto­­ma­tion solutions, so it was only a matter of time before these two categories merged. That’s the idea behind Panasonic’s Smart Home IAQ system. Expanding on the brand’s existing Connected Home security-monitoring system, this new component, which debuted in November at Greenbuild, will use the same wi-fi communication hub for ventilation and fresh-air systems, too.

At press time, Smart Home IAQ was beginning a multiphase rollout starting with Panasonic’s customizable Whisper­Green Select ventilation fans. Eventually the system will include a smart module; additional fresh-air and HVAC products; and a package of sensors for detecting moisture levels, temperature, and pollutants. The latter will work in concert with the hub to monitor and control airflow as well as expel airborne toxins.

The manufacturer is even planning to incorporate kitchen exhaust systems at a future date.

In a statement, Jim Shelton, vice president of Panasonic Eco Solutions North America, said, “This platform will ultimately evolve to include other integrated systems such as smart lighting, appliances, solar, and energy storage.” For homeowners and businesses, such a holistic wellness and security solution would be a breath of fresh air. —SK