This story originally ran in Engineering News-Record on June 14, 2017.

As of Thursday morning, 17 people have died and dozens more were hospitalized after a fire ripped through a 24-story apartment building in northwest London, England, late night June 13 and into the morning. The concrete-framed building was stripped of the insulating cladding that was fitted during a $12.7-million refurbishment completed last July.

Built in 1974, the 24-floor building contained 120 apartments and was managed for Kensington and Chelsea Council by an independent management organization. Over 200 fire-fighters battled the flames over night and well into the next day.

The fire consumed the building from the second floor up, according to the London Fire Brigade. The exterior was burnt black as flames stripped the new insulating cladding. The incident is “completed unprecedented,” said Dany Cotton, the first female Commissioner of London Fire Brigade. 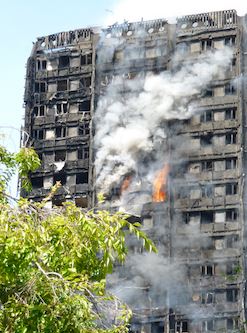 While investigations into the cause and progress of the fire have yet to begin, questions are being asked about the nature of cladding used to improve the thermal insulation value and appearance of the building.

The refurbishment work complied with “all required building control, fire regulation and health and safety standards,” according to Rydon Group Ltd., Forest Row, which handled the project.