Studio Gang’s second-place award in the Tour Montparnasse competition may be a loss, but that isn’t stopping the firm and their team from celebrating.

The studio sent out a press release the day competition winner, Nouvelle AOM, was announced, presenting their proposal to wider design community and signaling that they stand by their work, despite the outcome.

“Our project proposes an ambitious solution that increases density and quality of life by re-sculpting the tower to expand its functionality and eliminate the current negative impacts of wind around the base of the tower,” wrote Jeanne Gang, founder and principal of Studio Gang, in the release. 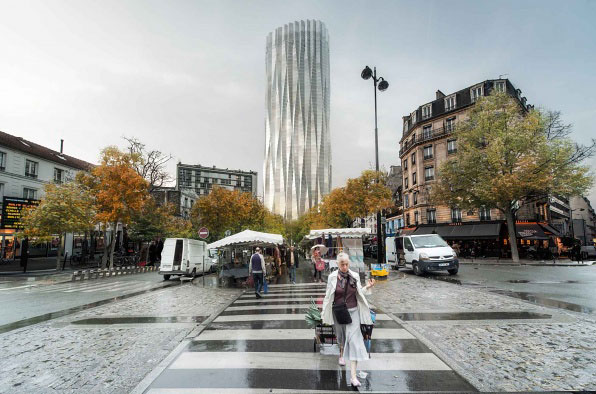 Studio Gang’s proposed tower, as seen from the boulevard Edgar-Quinet

Renderings of the firm’s proposed design for updating Paris’ first and widely disliked skyscraper show a facade constructed with large bay windows, as well as a rounded floor plan. The difference between the tower’s current facade and Studio Gang’s faceted treatment is best seen in an illuminated nighttime rendering.

Their proposed program for the tower featured an indoor garden and observatory, retail, 50 stories of office space, a conference center, and a performance and event space at the top of the building. The design was also supposed to reduce the tower’s energy consumption by almost 90 percent, according to the release. 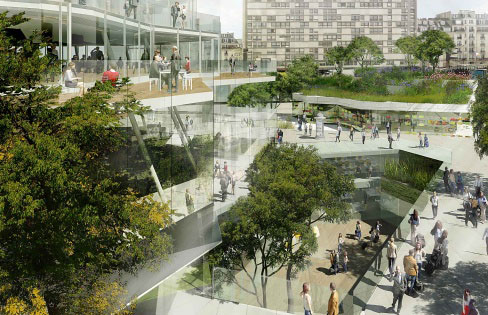 The tower’s lower floors are filled with gardens that will change seasonally.

Clément Mansion, an associate at the local architecture firm, Chabanne et Partenaires, that partnered with Gang on the proposal, characterized their proposal as “a design that transforms an urban eyesore into a new icon for the future of Paris.”

Studio Gang’s proposal, along with the competition’s other semi-finalists eliminated in May, will be on display at the Pavilion de l’Arsenal in Paris for most of October.

Erin Hudson, a former editorial assistant at Architectural Record, is a Toronto-based journalist who frequently contributes to the magazine and website.