A Day in the Life of Peter Stamberg

In 1972, on a trip to Europe during my final year studying architecture at the Rhode Island School of Design, I met a fascinating woman who was in the furniture business in Italy, Maria Simoncini. Maria was brilliant, glamorous, and so bewitching that, the next year, when I was in graduate school at the Architectural Association in London, I would periodically hitchhike to Bologna just to spend time with her. As I was finishing the AA, I hitchhiked for one last visit, but, when I got there, Maria had been called away on business. I was crestfallen—until her assistant said that Maria’s partner, Dino Gavina, would see me instead.

My life changed at that moment. I had read about Gavina and his ability to meld contemporary art and design. He was a legend: his company had become part of Knoll in 1968, bringing furniture designed by Breuer, Afra & Tobia Scarpa, Takahama, Matta, and others.

I spent a glorious five days with the wiry and energetic Gavina, talking intensely about the crisis in Modernism (some things never change), and, as I was about to head back to London, Gavina invited me to travel with him to Paris. “You won’t need to hitchhike,” he said with a grin. “I will buy you a ticket on the train.”

We arrived in Paris late at night, and the next day was gorgeous. It was June 8, 1974, and it was my 25th birthday. We started to race around St. Germain des Pres buying gifts—for other people. First, an ancient liquor shop, then an exquisite old chocolatier. With each purchase, Gavina would declare, “Per Connie” or “Per Giulietta” or “Per Teeny” or “Per Claude.” Loaded with packages, we hurried to the Musée des Arts Décoratifs, with Dino shouting to me about the beauty of the Parisian cityscape as we ran.

Waiting for us inside the museum entrance was none other than my god, Marcel Breuer, whose designs for the Hanson House (five minutes from where I grew up on Long Island), the Whitney Museum, and the Wassily chair had inspired me to study design. The optimism they expressed was the closest thing to a religion that I would ever believe in. Gavina’s “per Connie” gift was for Breuer’s wife. After breakfast, we walked around the galleries, with Breuer, Connie, and me speaking English and the curators translating for Dino. As we were saying goodbye, Breuer turned to me and said that if I decided to go back to New York, I should come work for him.

But there was no time for me to process this invitation to the gateway of heaven, because suddenly Gavina was off, and we were tearing back across the Pont Royal, toward the Luxembourg Gardens and down a narrow street that was strangely familiar to me. We stopped in front of a door, Gavina rapped on it, and I could hear a woman’s heels clicking toward us. When the door opened, I saw a face that was familiar too: I had seen both her face and the streetscape in paintings at MoMA. The street was Rue Férou, the woman was Juliet Man Ray, and the MoMA paintings were by her husband, Man Ray.

Juliet and Dino embraced, and he gave her the “per Giulietta” gift as we walked in. The 84-year-old Man Ray struggled to get up from his chair, but, when he did, he gave Gavina a big hug. Then Gavina introduced me, but Man Ray, wary of newcomers, seemed less than pleased to have a stranger in his house. Yet, once he learned it was my birthday, Man paused for a moment, took a copy of his book Autoportrait from a shelf and inscribed it, “Pour Peter Stamberg—cordially Man Ray 1974.”

For the next hour or so, I sat in the chair where Marcel Duchamp sat when he and Man played chess. Man had customized it for him by drilling a hole in the wooden arm for an ashtray for Duchamp’s cigar. The house was modest, very much an artist’s studio, and, to me, it was better than any museum. As we left, he handed me another little book of his, Analphabet.

Soon it was time for lunch. We headed to their regular lunch spot, Chez Napoleon on rue Bonaparte. As I had gained Man’s trust, he held my arm as we walked down the street. In the restaurant, Man, as was his custom, sat with his back to the entrance so no one would recognize him. Of course, everyone there knew exactly who was sitting in that seat— though, just as we started to eat, I looked up to see David Hockney walking out. When I mentioned who had just left, Man laughed and said he had heard that Hockney had come to Paris to draw his portrait. Hockney had not seen Man and, so, the portrait would have to wait.

Back at the house after lunch, Gavina and Man talked about adapting a Man Ray lampshade for production by Sirrah, a lighting company Dino was guiding. He and I took the shade off its armature and opened it up. Dino held it flat over a sheet of paper while I traced it. Man then made suggestions, and we drew sketches of what a base could be. A few days later, Gavina would take the sketches and the tracing back to Italy, where they would become the lamp called La Lune sous le Chapeau.

Dino and I left Juliet and Man around 5 and sped to the Galerie Paul Facchetti on rue de Lille. Madame Facchetti greeted us, and we got into her car and drove to a small town outside the city. Dino hopped out and tugged a chain outside a door. A cowbell clanged. He had the gift “per Teeny”—and he introduced me to Teeny Duchamp. Duchamp’s widow was born Alexina Sattler in Cincinnati, and, aside from her astonishing jewelry and French wardrobe, she looked every bit the Midwesterner. A friend later told me that she was never comfortable speaking French, so she was happy to be speaking American English with me.

I was excited to see that Teeny Duchamp’s house was filled with furniture by two of my other design heroes, Claude and François-Xavier Lalanne, whose joyous work I had never seen in person. Now I was surrounded by it. Their blue fiberglass hippopotamus bathtub was in one bedroom. I flipped off my shoes and jumped into it. I was sorry to leave to visit more friends in the next town—until I learned our next stop would be the farmhouse of “Les Lalanne.” I had just been sitting in their furniture, and now I was about to have dinner in their house. I remember it as one of the most astonishing nights of my life, but—after too much food, way too much wine, and too much to experience on one birthday—I no longer can recall the conversation. Somehow, Mme. Facchetti got Teeny back to her house and Dino and me back to Paris. I’m not sure how I got to sleep, but somehow I did. 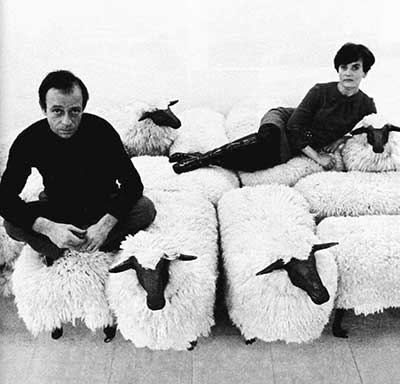 Les Lalanne with a flock of their sheep sculptures.

Cut to January 2007 and an exhibition of the work of Les Lalanne— the crocodile bench, the hippopotamus bar, the baboon cabinet—at the Paul Kasmin Gallery, in Chelsea in Manhattan. On the last day of the show, my husband, Paul Aferiat, and I decided to stop in to see it one more time. My heart skipped a beat when I saw Les Lalanne talking to Paul Kasmin in the back room. Without thinking, I unhooked a privacy chain and walked over to Claude and François-Xavier. “Excuse me,” I said, “you probably won’t remember, but I was a friend of Dino Gavina’s, and we came to your house for dinner one night a long time ago.” François-Xavier looked at me, put his hand on my forearm, smiled, and said, “It was your 25th birthday, a most fantastic night.”

There was something else about that fantastic day and night that I had forgotten over the years but that I was reminded of some time later, when the Jewish Museum in New York had a Man Ray exhibition. In a vitrine in the last gallery was a copy of Autoportrait. “That is the 25th-birthday gift Man Ray gave me,” I told Paul. He looked at me as if I were delusional. I grew uneasy—I hadn’t seen the book in years.

When we got home, I tried to remain calm as I strolled casually around our loft, scanning row upon row of bookshelves: nothing. My heart sank. Then suddenly, there they both were, tucked unassumingly among other titles on architecture and design: Analphabet and Autoportrait. I pulled them down gently and opened the cover of Autoportrait.

Having not seen the light of day in many years, the ink of the inscription was as black as the day it was written: “Pour Peter Stamberg—cordially Man Ray 1974.” 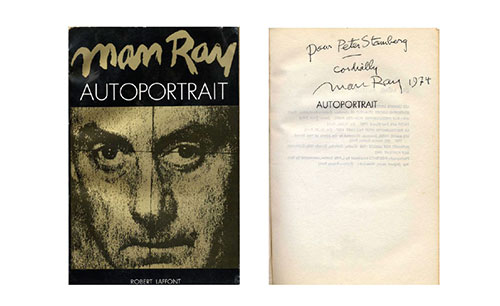 Peter Stamberg is a New York–based architect whose work ranges from residential to institutional and hospitality.