This website requires certain cookies to work and uses other cookies to help you have the best experience. By visiting this website, certain cookies have already been set, which you may delete and block. By closing this message or continuing to use our site, you agree to the use of cookies. Visit our updated privacy and cookie policy to learn more.
Home » British Designers Edward Barber and Jay Osgerby Built a Better Sofa by Observing, Sketching, and Breaking with Office Norms
Architectural ProductsPartners in Design

Trained as architects, Edward Barber and Jay Osgerby design task chairs as they would buildings—with features that accommodate the way people actually work. To achieve that, the co-founders of 23-year-old London studio Barber & Osgerby, use a descriptive design process which always begins with their anthropological observations of people working and countless sketches of ideal solutions to support the behavior they see. 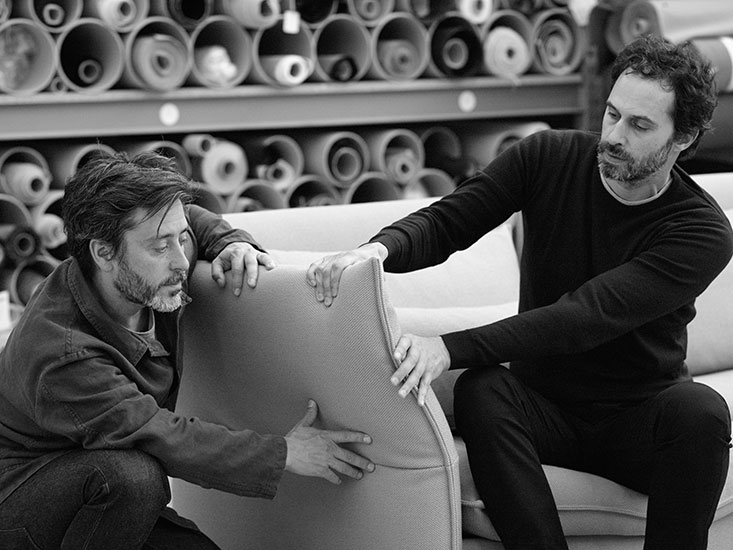 Jay Osgerby and Edward Barber test the adjustable armrests of the Mariposa Sofa, which they designed in 2014.
Photo © Barbara Sorg for Vitra

“In the last 10 years ... the way that people work has completely transformed,” says Edward Barber in a video pointing out how mobile devices enable people to work everywhere. “You’re no longer reliant on an office chair and desk. It means you’re working in places that aren’t necessarily an office. The idea of a desk is not so relevant any longer.”

The idea that a sofa might become the new workstation actually crystallized over six years as the designers observed people working everywhere, including in the lobby of a hotel they designed under their architectural firm Universal Design Studio.

“Our initial sketches and prototypes were for a system that would respond to three main changes in society—advances in mobile technology, the increase of co-working spaces, and the growing importance of modularity,” says Osgerby ticking off the forces that have workers migrating to sofas.

And in the course of working while they traveled, they brainstormed features such as power outlets at every seat. Some early prototypes of the sofa featured the same back heights as chairs to accommodate other seating and tables that might be used alongside it. Others began to incorporate lighting, power, and tables. Those elements, Osgerby says, are the most revolutionary and innovative because they enable users to charge laptops or hold meetings without leaving the sofa, just as people seem to prefer when they take over conventional couches. “Our studio went through hundreds of rounds of prototypes before finalizing these modular elements. It’s meant to be a complete system,” he says.

Vitra describes it as one “in which workstations are focused around a seating landscape,” designed by “keen observers of objects and how they are used.”

The men, whose shared background as childhood artists helped them bond while they were students at the Royal College of Arts (where each earned his M.Arch), generated numerous sketches supporting what they saw before moving on to the early stages of production. Although built for commercial settings, the new sofa system—like their products for luxury brands B&B Italia, Cappellini, and Flos—has a residential style. Such details are evidence of both partners’ time spent studying in the library of the RCA, where James Dyson is an alum, and of Barber’s additional interior design degree.

Will Soft Work do for office work what the Dyson did for vacuuming? Time will tell.

Artists and Designers Gather in Cape Town for Design Indaba 2019