In 1987, Steven Holl completed the Berkowitz-Odgis House, high on the dunes in Martha’s Vineyard, overlooking the Atlantic Ocean. The wooden building’s slender rectangular form— outwardly expressing its balloon-frame structure—took inspiration from Herman Melville’s description in Moby-Dick of the shelters regional Native Americans created from whale bones and animal hides. The house touched lightly on this fragile landscape, hovering on stilt-like piers over the undulant, sandy terrain. The design—whose linear exoskeleton, particularly along the veranda, invited a poetic play of shadow—also responded to stringent building codes requiring significant setbacks from wetlands and limiting the house’s visibility from the beach. The widely celebrated building received a Progressive Architecture citation and a National AIA Honor Award—yet, by 2013, the 26-year-old structure had been demolished. Now in its place is a new house, by locally based Hutker Architects (HA), that pays homage to Holl’s forms and ideas without literally recreating the original. What happened?

As HA principals Gregory Ehrman and Philip Regan tell it, they’d long admired the house, even as it changed hands and slowly deteriorated over time. In 2011, their clients fell in love with its site—six acres in Aquinnah, bordering protected conservancy land—but wanted to demolish Holl’s modest, 1,600- square-foot, three-bedroom house and build anew. No landmark protections were in place. “So we did everything we could to ultimately convince them,” recalls Regan, “that the architecture was significant—well worth restoring—and they should renovate instead.” 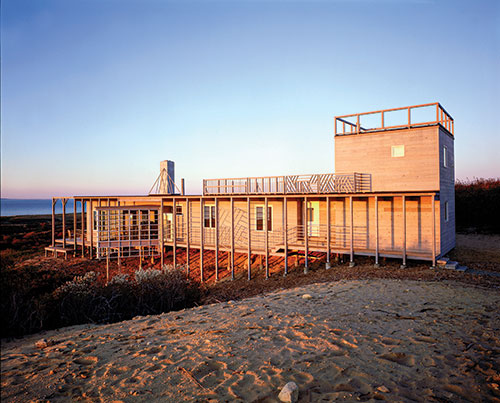 The new owners, however, wanted double the square footage, among other modifications, which HA accommodated, in part, by inserting an entire new floor between the house and the sand. “But as we analyzed the existing conditions with an engineer, and more than one general contractor,” says Regan, “it was like pulling a thread.” Holl’s wood structure was soon declared rotten to the core and beyond repair. HA concluded that the wisest, most economically sound solution would be to raze it and rebuild from scratch.

Before proceeding, the architects phoned Holl to alert him to the situation. As Holl said to RECORD, “I appreciated the call, but once they told me how much more space, etcetera, etcetera their client demanded, I said, ‘Well, thank you for telling me, but I don’t see there’s much I can do.’ ” Holl added, “I don’t blame Hutker—it’s the society we live in. People with enough money can get whatever they want.” And often that means bigger. When asked recently if he would have been open to consulting or collaborating on the project, or even taking it over, Holl paused and replied, “I love this house—it’s a very important early project for me—but the answer is no. I’m just too busy.”

Demolition proceeded, but partway through new construction, the clients, a couple, decided to split up and liquidate. They put the partially built project up for sale, with HA marketing the fully permitted scheme bundled with the real estate. But the property languished in limbo for more than a year. Finally, in late 2014, another couple bought it as a second home and, in 2016, completed the house HA proposed.

The new building, cedar clad like its predecessor, fills the original envelope, retaining Holl’s massing from the main floor up through its simple tower. Some of the changes made it comply with current code; others unobtrusively rendered the house (now LEED certified) sustainable by today’s standards. Insulation and cross-ventilation were improved, and the flat, black rubber roof membrane that, according to HA, had failed repeatedly was replaced with a durable resin and planted surface. Amped up to 3,560 square feet, the house acquired a main-level master suite, three bedrooms downstairs, updated building systems, and a reconfigured kitchen and bathrooms with up-to-date fixtures and finishes. Gone are Holl’s distinctive wood railings, whose diagonal patterns cast complex shadows. Now cable rails replace those more intricate ones, which Regan says were hard to maintain, needed some modifications to meet code, and, perhaps most of all, displeased the new owner.

At the same time, HA took care to stealthily bury the new freestanding garage in a hillside. And, instead of completely maxing out the buildable square footage (which grandfathered zoning limited to the original envelope, since the house would not have been permitted in its current location today), the architects set back the lower level’s western face by 5 feet, leaving the exoskeleton relatively unencumbered.

But a structure with a solid, built-out base no longer perches birdlike over the dunes. As Holl puts it, “There’s a sculptural aspect that gets destroyed if you try to do what they did. It becomes a different house.” Nonetheless, having seen it in photos, he feels it “still relates to the spirit of the site, some ghost of that comes through, in a pretty strong way.” And for him, “that’s better than ripping it all down and doing a Cape Cod, or whatever’s usually done there. It’s still linear, wood construction. And from the approach, it’s almost like the original—though I wouldn’t say that’s true from any other angle.” 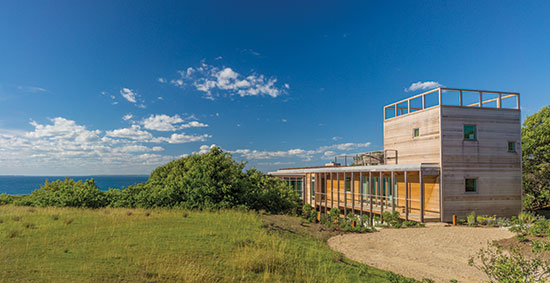 Nonetheless, he ponders whether the existing structure was deemed unsalvageable as a pretext “so they could tear it down and build something bigger.” The intentionally modest Berkowitz-Odgis House cost $275,000 in 1987 (about $618,600 in today’s dollars), but the stakes have changed. According to public records, the property (with the partly built house) sold for $2.1 million to the current owners—who now list the finished work as a vacation rental for $30,000 per week.

“It’s a different world,” says Holl. But rather than bemoan the loss of the house, he cites a story about Louis Sullivan. “In the last decade of his life, when Sullivan learned of the destruction of one of his buildings, he responded: ‘If you live long enough, you’ll see all your buildings destroyed . . . It’s only the idea that really counts.’ ” And in that spirit, Holl graciously concludes, “The house by Hutker carries ideas from our original design—and, in the end, that’s what’s most important.”

House of the Month: Remote Cabin by Stonorov Workshop Architects