From the announcement of the 2019 Chicago Architecture Biennial theme “…and Other Such Stories,” it has been clear that this year’s event, opening September 19 and running until January 5, will have a distinctly different mood from the two previous exhibitions’. Pushing the limits on the definition of practice, curators Yesomi Umolu, Sepake Angiama, and Paulo Tavares commissioned participants from fields beyond those typically represented in architectural expositions. While few of the 80 contributors are practicing architects (many are visual or performance artists, urban planners, or housing and urbanism activists), all grapple with urban and civic issues, through research and advocacy rather than traditional design.

Inside the primary Biennial venue, the 19th-century Beaux Arts–style Chicago Cultural Center, projects will be arranged to complement each other spatially and thematically. On the bustling public first floor, Berlin-based ConstructLab will install a flexible structure intended to create space for conversations about togetherness, as well as planned and impromptu events. An installation by Chicago’s self-described “Indigenous Futurist” Santiago X will tackle themes surrounding the survival and sovereignty of indigenous people in contemporary urban spaces, while a Romania-based choreographer, Alexandra Pirici, will activate the space with a performance piece involving the building itself. 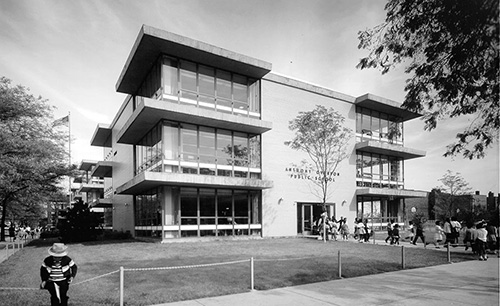 Anthony Overton Elementary School (1963) by Perkins and Will is a satellite venue of the Biennial.

Photo courtesy Perkins and Will

Alongside the more traditional educational programs, “there are many contributors for whom community-led initiatives are at the heart of their practice, and engagement is central to their work,” artistic director Umolu tells RECORD. That engagement may be most visible in the Biennial’s satellite locations throughout the city. In the South Side Bronzeville neighborhood, Herkes İçin Mimarlik (Architecture for All), Zorka Wollny, studioBasar, and Raumlabor will collaborate with Borderless Studio at the shuttered Anthony Overton Elementary School, a modernist building from 1963 by Perkins and Will, where Borderless has been working since 2017. Other installations and events will take place at the remaining Jane Addams Homes, a decommissioned public housing complex; the Sweetwater Foundation, known for its urban-agriculture research; and the Jane Addams Hull House Museum.

Chicago faces the same challenges as other postindustrial cities around the world, such as racial segregation and a lack of affordable housing. While architects have long attempted to address these issues through building, the 2019 Biennial will amplify some unfamiliar voices from a broad set of disciplines questioning that as the primary solution. It’s a vision that harmonizes with the direction of new mayor Lori Lightfoot, who successfully campaigned on rethinking the city’s approach to urban development. And while Lightfoot inherited the Biennial from former mayor Rahm Emmanuel, organizers say she has already demonstrated her support of it. In fact, her recently appointed Planning and Development Commissioner, Maurice Cox, comes from the City of Detroit Planning and Development Department—an organizational participant in this year’s edition of the Chicago Biennial.