As a city founded over 3,000 years ago, Beijing has a culture that hinges on its relationship to its rich past. Architecturally speaking, the depth of that connection, according to Ma Yansong, lies in the negative spaces. The founder and principal of Beijing-based MAD Architects is specifically talking about the firm’s recently completed Courtyard Kindergarten, an ­unusual school that surrounds and preserves a group of 300-year-old residences in a traditional siheyuan courtyard (one surrounded on all four sides). “That’s the beauty of the city,” he says. “It’s about emptiness between the buildings, not about the buildings themselves.” This idea, along with fusing the old and the new, was the basis of the firm’s strategy for this project.

The architect, who was born and raised in Beijing, says he lived in a similar courtyard house when he was young and that this fusion of indoor/outdoor living spaces is unique to the Chinese capital. By building the 85,000-square-foot kindergarten around the existing 9,500-­ square-foot courtyard, Yansong gave new life to the limited site, repurposing the existing structures into classrooms, and its original central courtyards as three distinct outdoor spaces: two will serve as outdoor learning centers and one as an area for ceremonies and events. 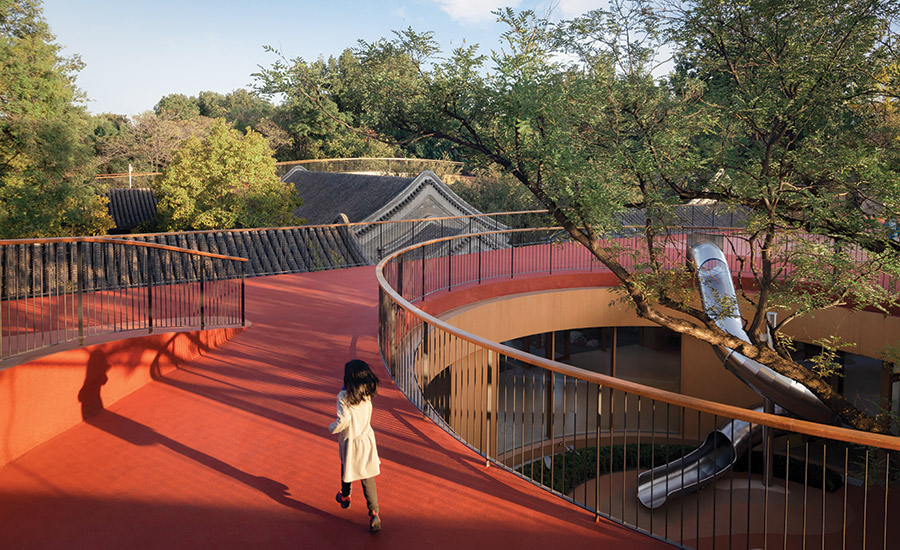 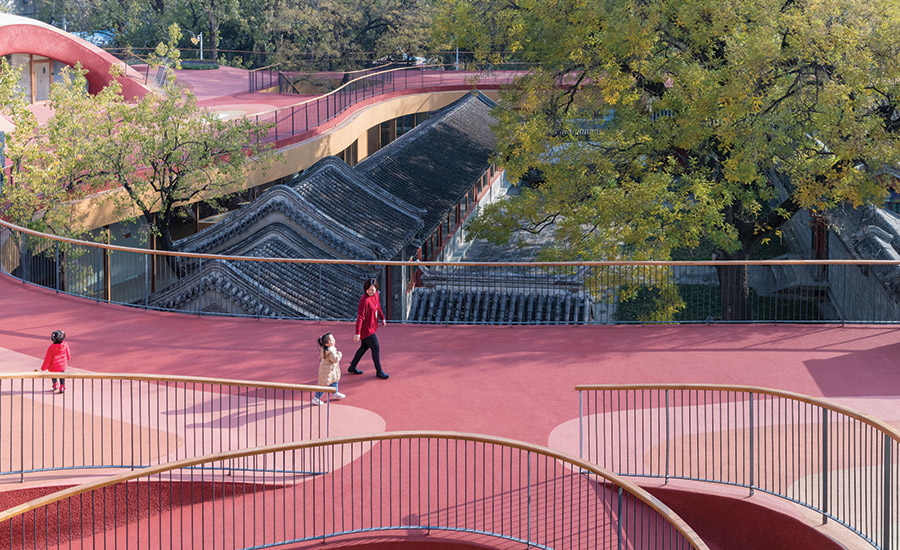 A series of slides, ramps, and stairs within the new building's courtyards connects its rooftop playground to classrooms on the ground level. Photo © Arch-Exist (1) and Iwan Baan (2), click to enlarge.

A playful undulating landscape made of a (breathable) red, rubberlike plastic, the ­kindergarten’s 37,000-square-foot rooftop provides much-needed outdoor space for the children to safely run, climb, and slide around the traditional gabled rooftops of their city’s past. “When there’s an unfamiliar experience like that,” says Yansong, “people can truly start to explore.” As for the playground’s bold color choices, he says the firm was inspired by the bright reds and golds of Beijing’s Forbidden City. By adapting the historic hues to this new, unfamiliar landscape, the goal was to create an environment that would stimulate the imagination. 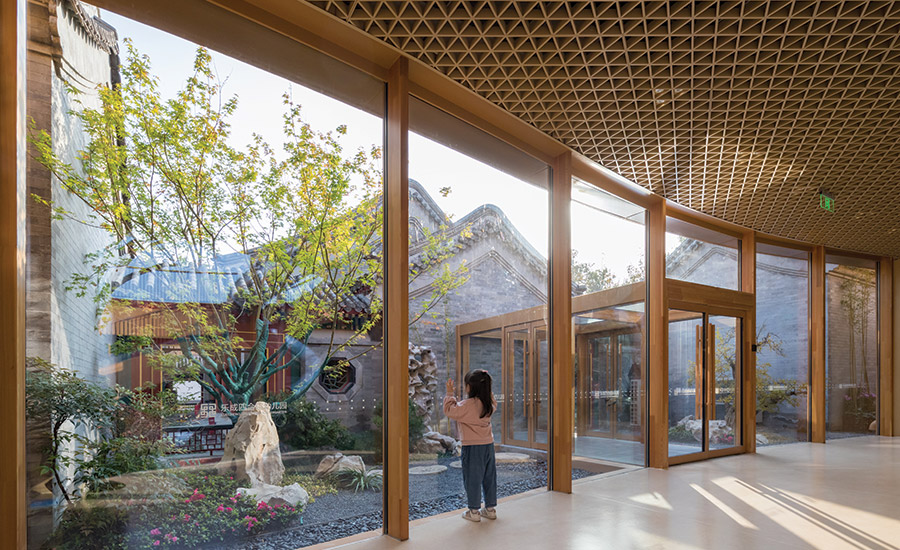 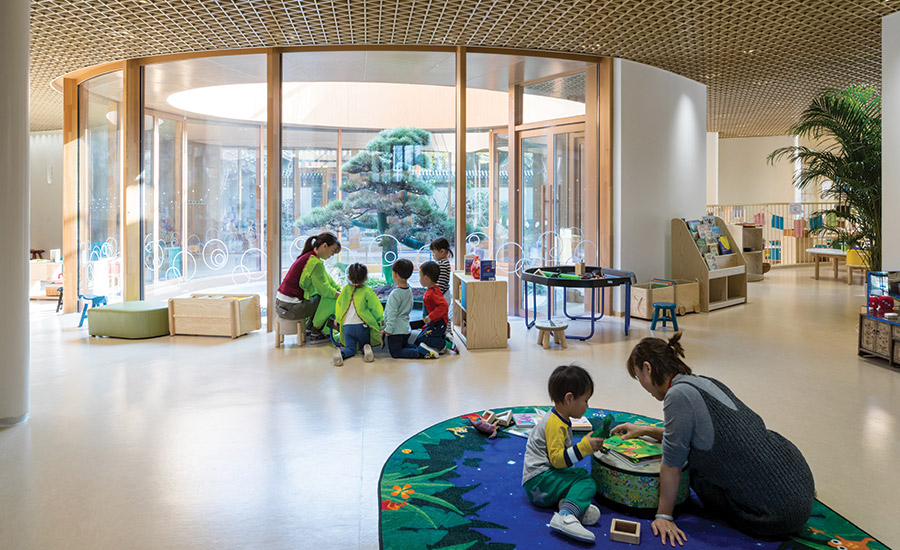 The kindergarten's interior is open-concept and features a metal-lattice ceiling, painted to look like wood. A library, theater, and gymnasium are housed inside, while central facing glazed walls spotlight the history outside. Photo © Iwan Baan

The architect fondly recalls a time when neighbors daily gathered beneath the trees in courtyards like these. “We all miss that,” he says, referring to Beijingers like himself who remember a time before high-rises were ubiquitous. Surprisingly, he adds, while the city only started preserving its historic architecture in relatively recent years, today it struggles with finding ways to reuse these buildings. So, instead of leaving the old structures vacant, the firm decided to give future generations the opportunity to experience the quickly vanishing charms of the city’s historic past. 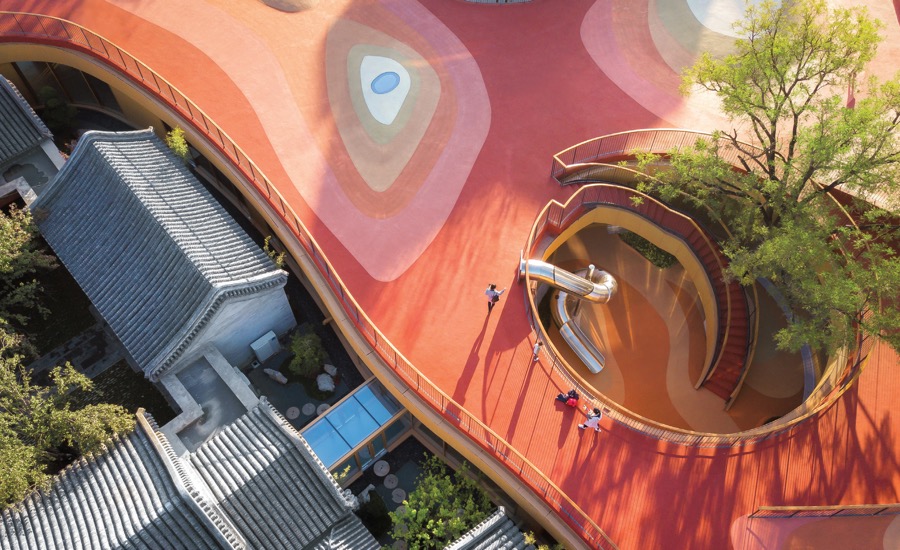 In that regard, by inserting several glazed courtyards inside the kindergarten’s new facility, the firm was also able to preserve three ancient pagoda trees on the site. An open floor plan that features an abundance of daylight and pine wood unifies the spacious interior.

According to Yansong, the private kindergarten, which opened in late 2019, is not only popular with the 400 young children it accommodates, but also among their parents.

When asked if the goal was to interest the younger generation in architecture or history, Yansong didn’t hesitate to answer: “Both.”