Once a preeminent naval shipbuilding site, the sprawling 300-acre Brooklyn Navy Yard on the East River, first established in 1801, is now a diverse community of over 400 businesses and entrepreneurs. Building 77, a 16-story, concrete-and-steel structure, is one of the Yard’s most active job hubs; originally built as a windowless storage and administrative facility in 1942, and renovated by Beyer Blinder Belle in 2017, the building provides one million-square-feet of floor space for dozens of fledgling companies—and one New York City high school program.

Designed by Perkins Eastman, the Brooklyn STEAM Center is located in a 33,000-square-foot space lodged among furniture companies and manufacturing facilities, architecture and design firms, film studios, and a food court that includes a brewery and the famed lox and bagel purveyor, Russ & Daughters. While it seems an unusual place for a public school, the location was a strategic move; the goal of STEAM—one of the latest models for technical high schools, developed in partnership with the Navy Yard—is to teach real-life job skills in a setting where students can learn from industry leaders, and even intern with other building tenants. Qualifying juniors and seniors from eight partnering Brooklyn schools choose to train in one of five professional fields, or “pathways”—computer science, design and engineering, construction technology, culinary arts, and film and media—and split their days between their home schools and STEAM as part of the two year program. 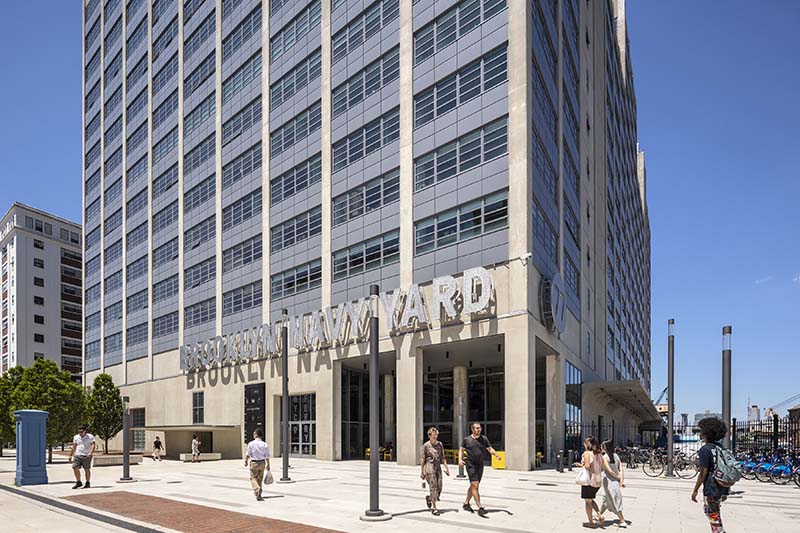 Perkins Eastman’s design objective for STEAM, which takes up an L-shaped chunk of the building’s second and third floors, was to emulate the companies that surround it. “The challenge was to make it less like a school and more like a place of work,” says project architect Michael Palmer. “We wanted to give students agency, and to foster a sense of independence.” To do this, the architects created five unique classrooms, each catering to a specific pathway. For the construction technology and design and engineering workshops, which are clustered next to each other, they removed the existing ceiling slab to fit ductwork and to create double-height rooms with enough space to build out large projects, such as a “tiny house” that was constructed last summer. The film and media area, also two stories, features a sound stage, control room, and recording studio, and culinary arts students—who receive their food handling licenses upon graduating—spend their time in a large teaching kitchen. The computer science room, called the “glass cube” for its significant glazing, appears most like a start-up, with an open plan, movable desks and chairs, and white boards. 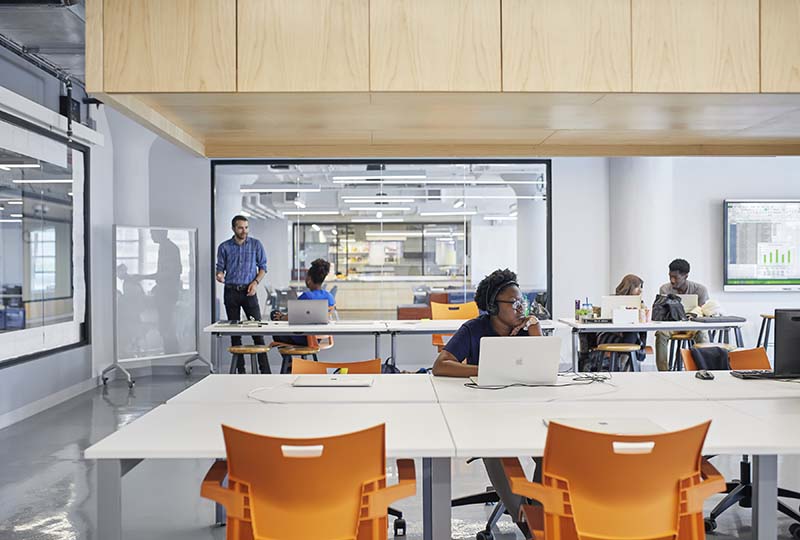 The computer science classroom resembles a start-up workspace, with its significant glazing and movable desks and chairs. 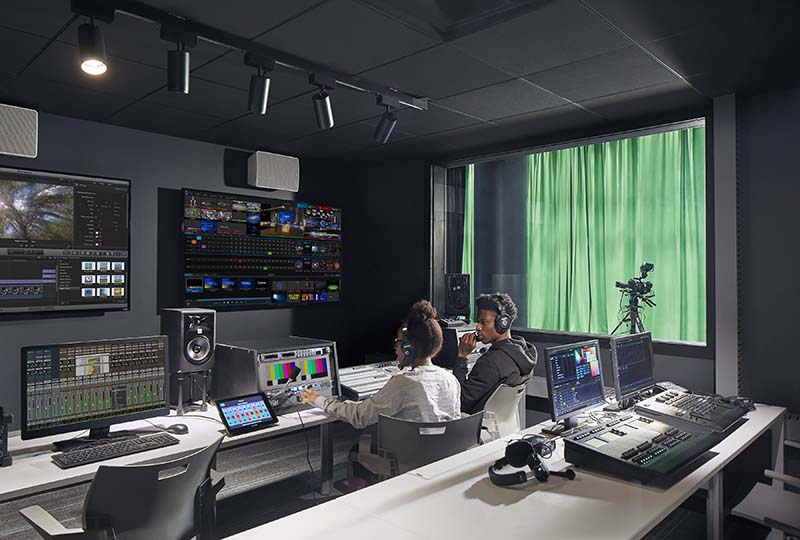 Film and media students have access to a recording studio, sound stage, and control room. 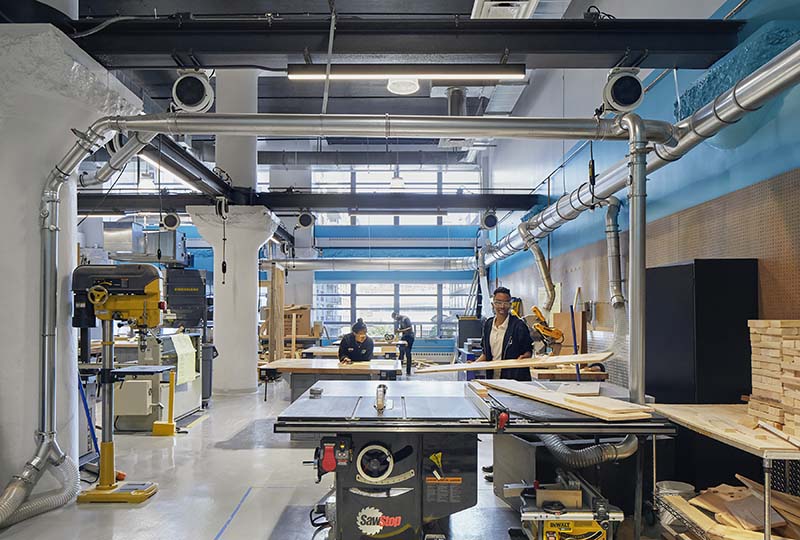 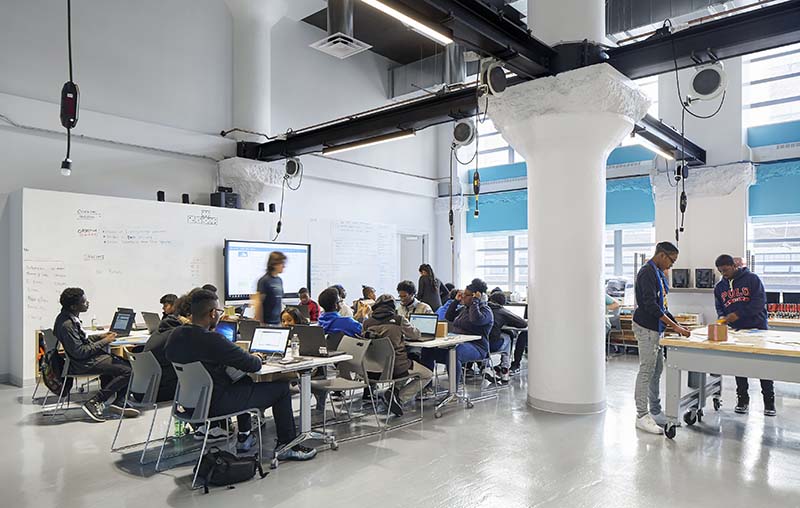 The architects removed the upper floor slab to create double height spaces for the construction technology and design and engineering workshops (1 & 2).

According to principal Christine Schlendorf, promoting transparency was an important way to create a professional environment for students, and to encourage teamwork. “We wanted all pathways to have eyes on each other,” she says, so some classrooms and conference rooms are fully glazed. An open common area with visual access to the kitchen, seminar rooms, administrative offices, and computer lab, also fosters off-the-cuff collaboration. Additionally, by exposing the space’s original columns, steel bracing, and its polished concrete floor, the architects were able to maintain an industrial feel, rather than an academic one. 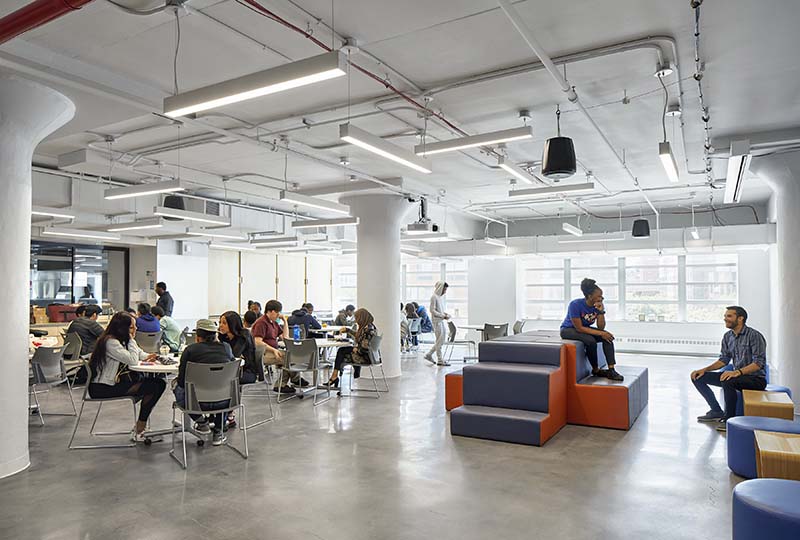 At a recent open house, the students showcased their projects in a vibrant multi-disciplinary display. The event was catered by those in the culinary program, who took over the common area with tasting booths that represented an international array of cuisines. The school has only been open for a year, but plans to expand into adjacent vacant office space are already percolating, say the architects. “It is not traditional in any sense,” says Palmer. “Here, students are treated like adults.” 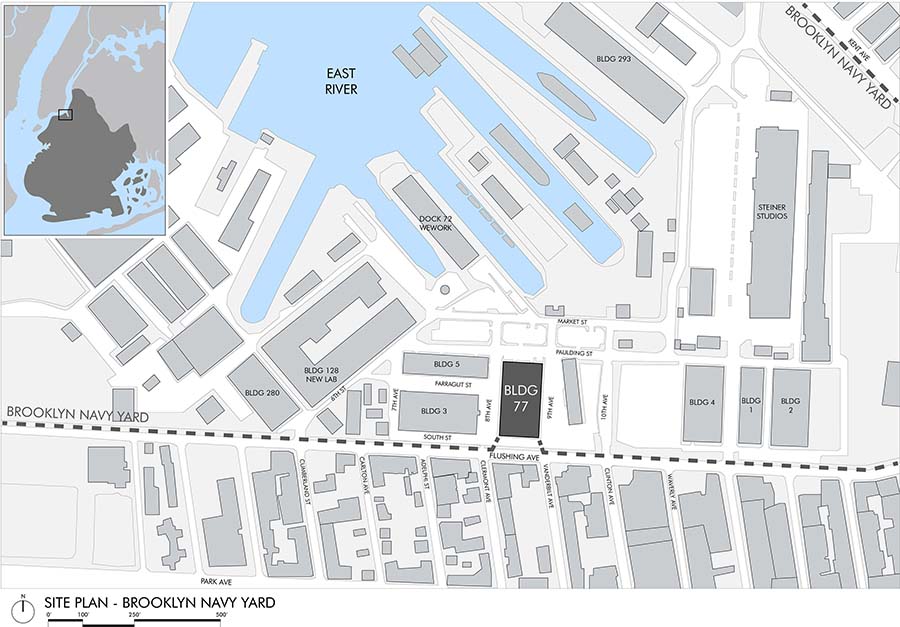 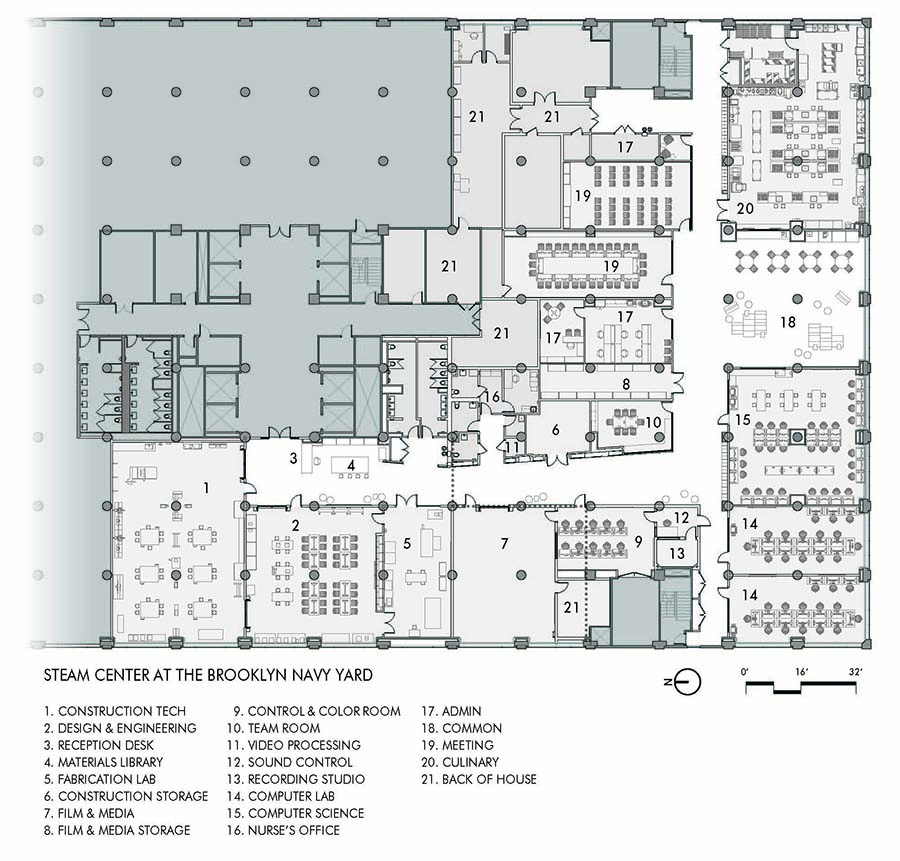 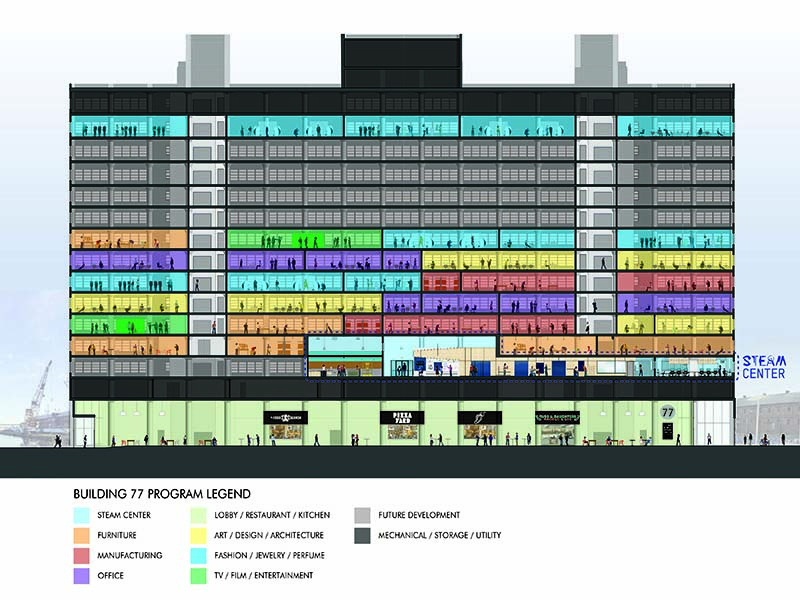