North Hall, the new dormitory at the Rhode Island School of Design (RISD), looks like nothing else at the art college’s rolling urban campus, or at its close Ivy League neighbor in Providence, Brown University. Tall and dark, with bladelike edges, the rectangular building, by Boston-based architect NADAAA, has a distinctive presence, covered in a zigzagging array of shingled fiber-cement panels over its long east and west facades, and in blocks of differently patterned brick crowned by anodized aluminum fins on the short north and south ends.

A wide range of historic and contemporary architecture mingles along the steep streets that are home to these two prestigious institutions. A Venetian Renaissance–style structure at the base of a hill leads to a concrete behemoth by Philip Johnson (1971) at the top; a glass and brick confection by Rafael Moneo (2008) stands beside a pediment-topped neoclassical facade. Then there are the countless towers and steeples. Over the years, Victorian houses have been shuttled around to make room for green spaces and new buildings, which most recently include a creative-arts center by Diller Scofidio + Renfro (2011), an engineering-research center by KieranTimberlake, and a performing-arts complex by REX currently under construction, all at Brown. 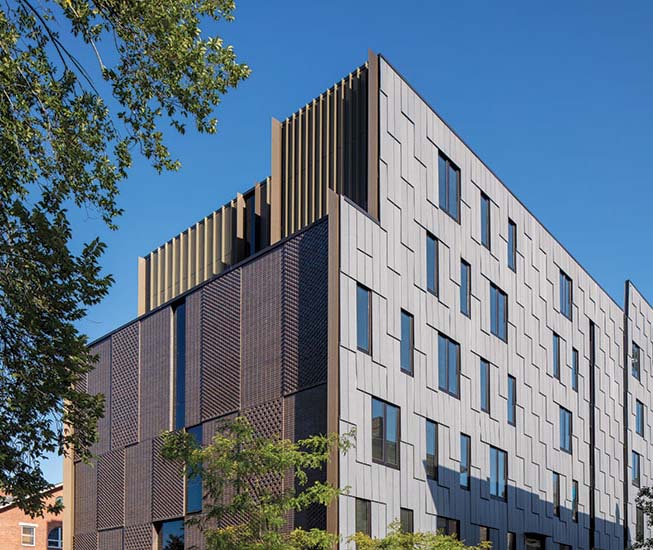 Major building projects are less frequent at RISD; North Hall is the first newly constructed dormitory here in 34 years. But it’s not the first project NADAAA principal and RISD alumnus Nader Tehrani has worked on for the school—an adaptively reused bank building just across the Providence River includes the Fleet Library (2006) within its first two stories, designed by Tehrani’s then firm Office dA. (Its upper levels were renovated as student housing.)

For North Hall, RISD followed Brown’s lead by employing Integrated Project Delivery (IPD), a collaborative approach to design and construction that includes the client, architect, contractor, engineers, and consultants in weekly meetings from the outset. “This is the first time we’ve had a project with a big enough budget to make IPD feasible,” says Annie Newman, RISD’s director of planning, design, and construction. “There are a lot of up-front costs.”

The phased project includes the renovation of other dorms built on the slope, including the adjacent Nickerson Hall (currently under way) and the creation of a new green between it and North Hall. Those two buildings are connected by a canopy supported by hefty, staggered brick piers in the shapes of the letters R, I, S, and D. “The canopy is a gate to a new urban promenade,” says Tehrani, whose firm was awarded the project following a 2014 master plan RFP that included two other Boston-based studios—Machado Silvetti and Kennedy & Violich Architecture—and Los Angeles–based Michael Maltzan Architecture. 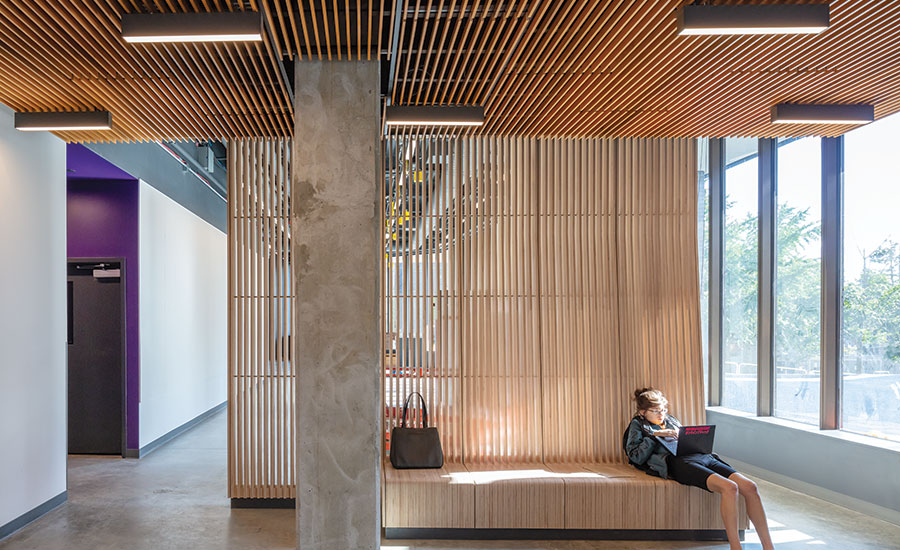 Select wood accent pieces, including a bench-cum-screen at the entrance, were made by NADAAA’s in-house fabrication studio, Nadlab. Photo © John Horner

Though RISD has no sustainability guidelines in place for new buildings, the hope with North Hall was to limit the environmental impact of its construction and reduce energy consumption once occupied. In early IPD strategy sessions, NADAAA proposed the use of cross-laminated timber (see sidebar below). In addition to being a low-carbon approach, it dramatically reduced construction time for this fast-track project, which broke ground in June 2018 and opened for the Fall 2019 semester, just 14 months later.

The 40,800-square-foot residence hall was designed from the outside in to use approximately 27 percent less energy than a typical code-compliant building. Those unusual exterior walls—inspired on the one hand by the shingled roofs of nearby houses and the perforated brick of Pietro Belluschi’s 1950s dormitory down the hill—have enhanced insulation, with a lower-than-average U-factor. Inside, everything from lighting occupancy sensors and low-flow showers, faucets, and toilets aid in the cause.

The no-frills interiors feature exposed ductwork in common areas and exposed timber ceilings in the bedrooms and fifth-floor lounge. Walls are painted a deep purple on the ground floor and lighten as you ascend the building to medium blues and an almost-white gray at the uppermost level. 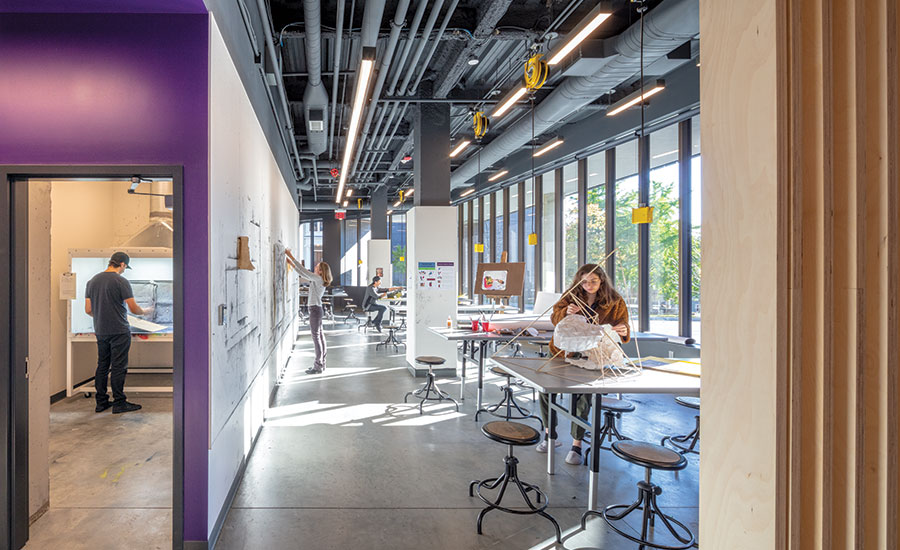 Much of the ground floor serves as a daylight-filled art studio. 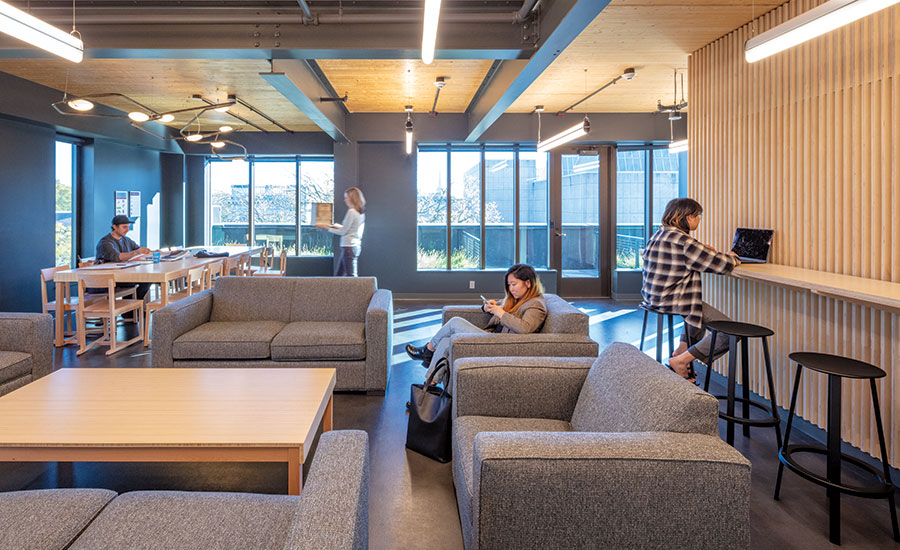 A lounge on the fifth floor, its CLT ceiling slab exposed as in the individual rooms, features a kitchen, dining and seating areas, and a terrace.

The need to accommodate 148 beds resulted in a building that was much larger than some of its immediate neighbors, but almost diminutive compared to Philip Johnson’s sawtooth-roofed tower (Brown’s List building) across the street. A structure that is at once overscaled and slight—its laminar sides and sharp edges accentuating thinness—NADAAA did a commendable job carving out of its massing as much volume as possible, with cornice lines, terraces, and material shifts that relate to the surrounding context. From some perspectives it is king of the hill, from others just part of the eclectic mix. 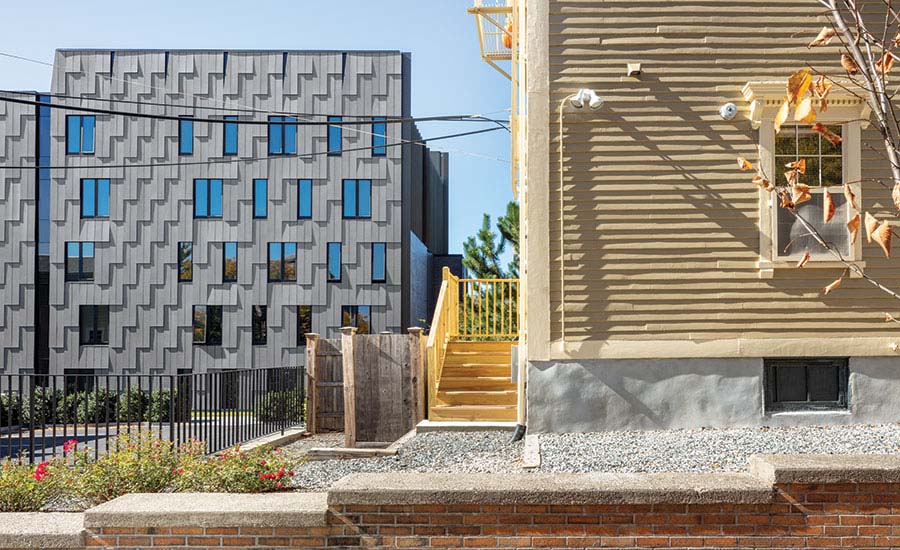 The architects at NADAAA are no strangers to academic buildings, having designed several dynamic teaching facilities from Atlanta to Australia. Most recently, the Daniels Building at the University of Toronto is an exciting clash of neo-Gothic grandeur and contemporary spatial and structural bravura—so otherworldly in fact, that an episode of the futuristic web TV series Star Trek: Short Treks was filmed there. As housing, North Hall is, alas, more subdued, reminiscent instead of an earlier Office dA apartment complex, South Boston’s groundbreaking—formally and in terms of sustainability—Macallen Building (2007). Like Macallen, North Hall’s diversity of materials and textures and brooding form may seem an odd insertion into any neighborhood, whether a transitional industrial site in South Boston or an idyllic college campus, yet somehow it works. At RISD, appropriately enough, the building is as much an art project as an architectural one, the college itself providing to one former student the palette to create something that stands out, but also fits right in. 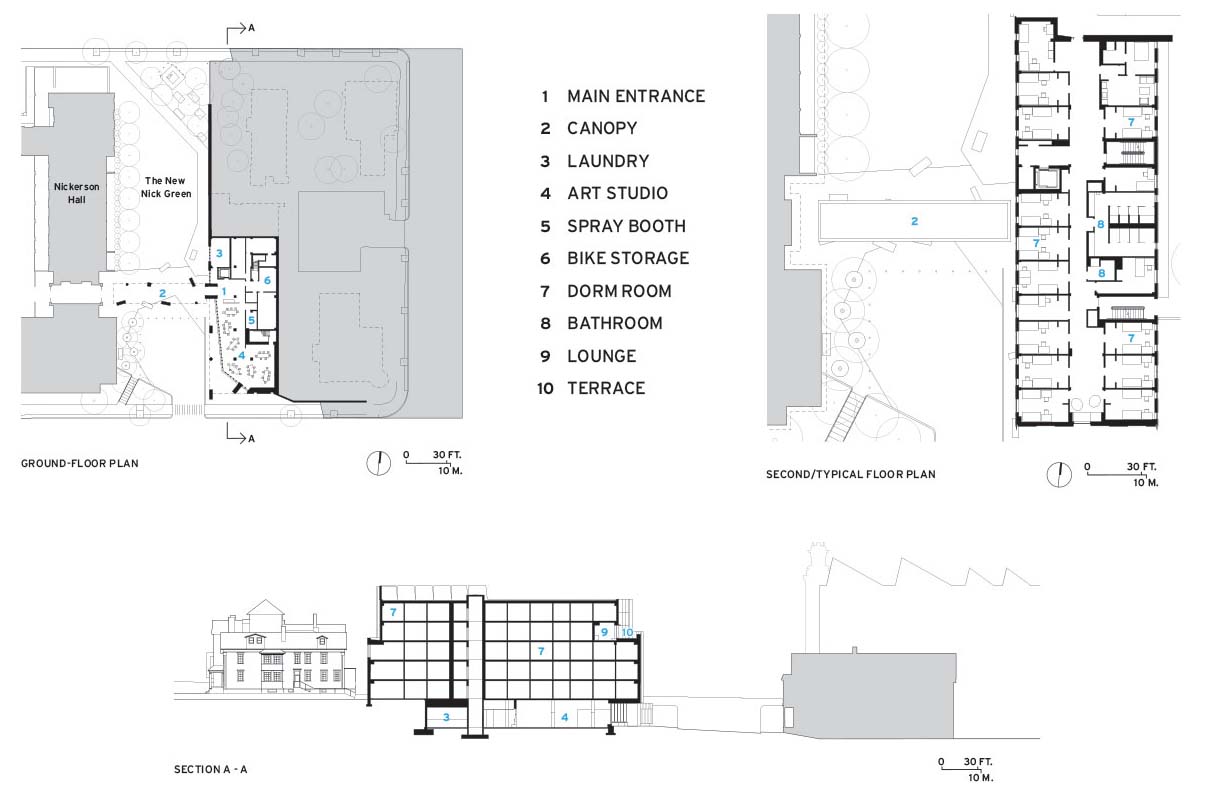 A closer look at the steel and cross-laminated timber construction 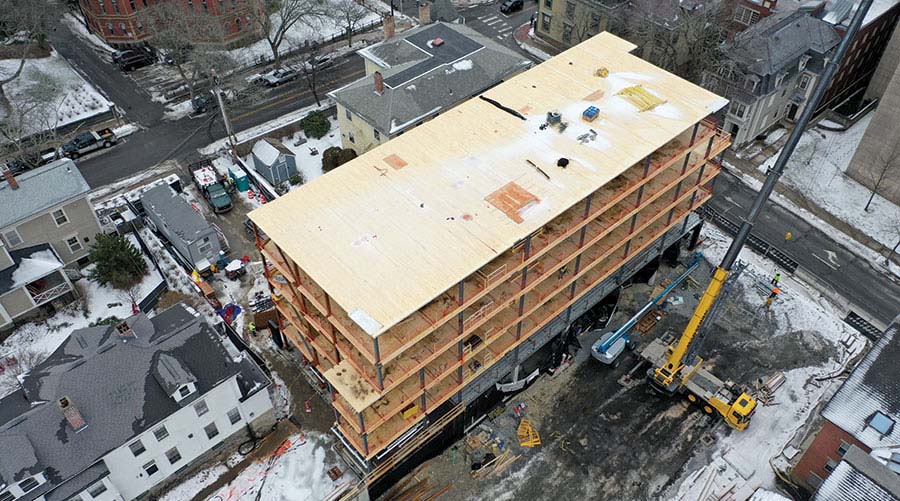 It took only 21⁄2 weeks to erect North Hall’s six-story structure, which combines steel columns and beams with cross-laminated timber (CLT) floor slabs. The steel beams were fabricated with penetrations to allow building systems to pass through them. For instance, mechanical systems are located in the corridors, feeding the entry wall of the bedrooms, each of which has a dedicated thermostat and heat pump for individual thermal comfort. The CLT decks, which are made mainly from black spruce and manufactured by Nordic Structures in Canada, replace energy-intensive concrete, with the aim of reducing carbon emissions. The hybrid structure allowed for 9-foot-high raw wood ceilings that don’t need added finishes. The five-ply CLT slabs are topped with an acoustic mat and self-leveling gypsum concrete to help reduce noise transfer between floors. Much of the CLT came in standard 8-foot widths, though NADAAA used several narrower sections to increase efficiency of installation. Where excess CLT did occur, the architects collected the field-cut slab pieces and used them to create custom counters and furniture for the dormitory. 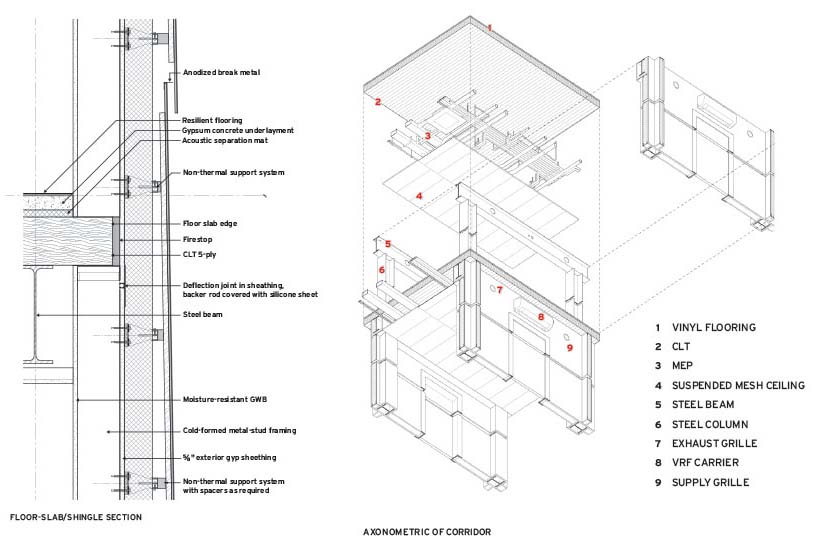