Some 10 miles southeast of Santiago, Chile, in the mountainous municipality of Pirque, 2017 Record Vanguard firm Max Núñez Arquitectos has designed a greenhouse just steps away from a repeat client’s suburban home. A study in contrasts, the rational, precise structure brings a lush jumble of tropical plants to an area straddling the border between bustling city and semi-arid mountainous countryside.

Architect Max Núñez envisioned the greenhouse as both machine and looking glass. “What you see is actually the way it works,” he says. “We didn’t want to add any other elements than those appropriate for a greenhouse.” The design also creates multiple perspectives for observation: “From inside, you can see the natural beauty that surrounds you, but you can also enjoy it from the outside looking in, like a jewel box.” 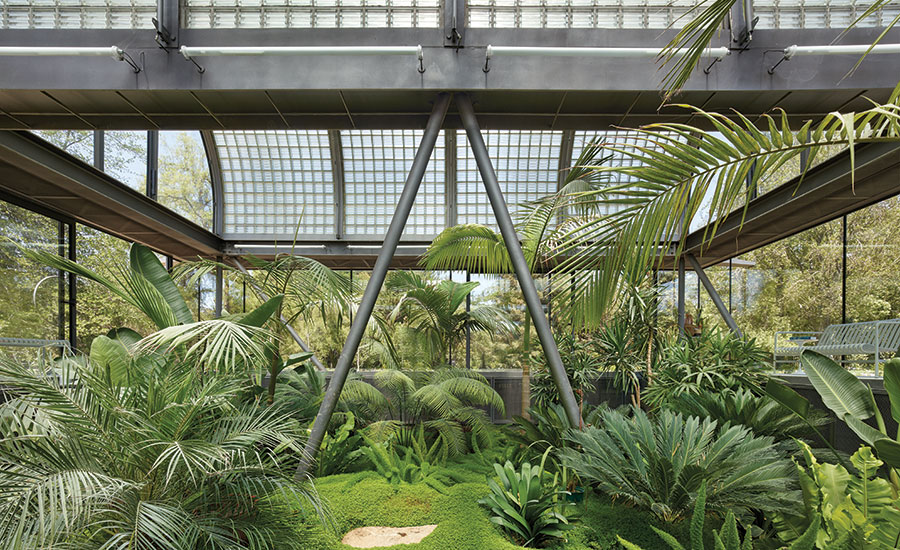 Each side of the small, square building measures roughly 40 feet, with expansive glazing and operable windows on every facade. Supported by a skeletal steel structure, the greenhouse is topped off with a pair of dramatic vaults rendered in glass brick. The bricks are smooth on their exterior face but have a gently fluted surface facing the interior, which serves to diffuse the sunlight that hits the plants.

The Santiago-based architect, who founded his studio in 2010, began designing the Pirque greenhouse in early 2018 for a retired businessman who loves plants but had no experience with tropical flora. (Landscape architect Juan Grimm is working with the client on the plantings.) Situated some 500 feet from the main house and primary residence (Núñez had previously renovated the man’s apartment in the city), the site is located within a viticulturally productive region of the country. A path of large natural stones, sourced from the nearby mountains, leads to the elevated volume, raised more than 2 feet off the ground. 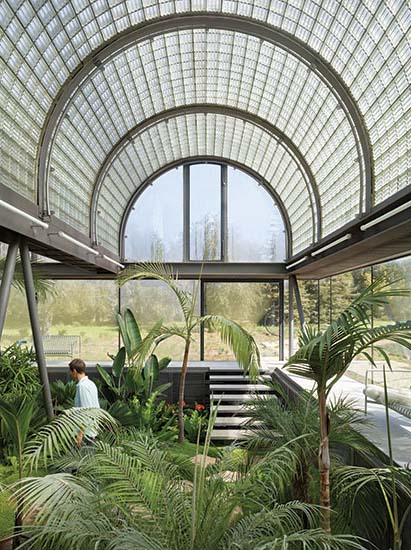 The sprinkler system pokes out of pipes along expansion joints in the vaulted ceiling. Photo © Roland Halbe

Within the greenhouse, a 4-foot-wide walkway along the interior perimeter encircles a 27-by-27-foot sunken pit. A small staircase leads down to the garden floor. The vaulted ceiling rises to just over 20 feet high, creating space for larger plants to grow tall. Two thin structural columns meet in the center, forming an inverted V that supports the central roof beam. “I wanted everything to feel lightweight, so that when you’re inside, you don’t perceive it as a very heavy structure,” says Núñez. “Rather, the idea is that the plants support the roof.”

An integrated heating, ventilation, and irrigation system keeps interior temperature and humidity stable throughout the year, where the mild seasons vary from the mid-30s in winter to the mid-80s in summer. Air ducts concealed beneath the promenade supply warm air; windows placed at the corner of each wall provide a cross draft; and micro-sprinklers installed along the arches of the vaults spray a fine mist of water. The three systems are electronically coordinated and automated. The windows, for instance, open automatically when the interior temperature exceeds 68 degrees Fahrenheit. “For greenhouse technology, it’s quite simple,” says the architect.

The symmetrical, square building stands in contrast to both its contents and its surroundings. “The idea was to create something that interacts with and challenges what’s growing inside,” says Núñez. “The illusion is of control over nature—something you cannot control.” 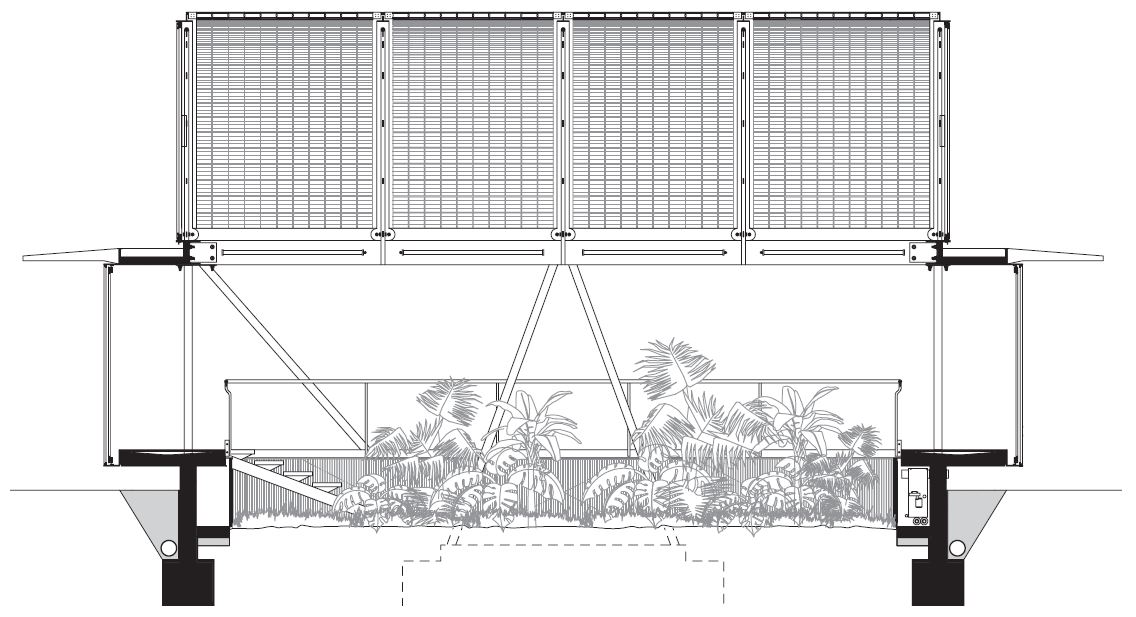