On the southeast coast of Mexico’s Baja Peninsula, surrounded by rugged desert and pristine beaches, the state capital, La Paz, overlooks a protected bay off the Sea of Cortez. Unlike Cabo San Lucas, the splashier resort 100 miles to the south, this old colonial settlement, founded by the Spanish in 1535, retains much of its historic character. Even with 250,000 inhabitants, it still looks like the small port town where John Steinbeck set his 1947 novella The Pearl. Along the water, a recently rebuilt promenade gives it a distinctly urban edge. This is where Grupo Habita, the design-savvy hotelier, discovered a landmark villa built around 1910 for a prominent family whose enterprises included harvesting pearls from oysters. “It was almost as if the house was waiting there for us,” recalls founder and managing partner Carlos Couturier, “to tell a new story.” 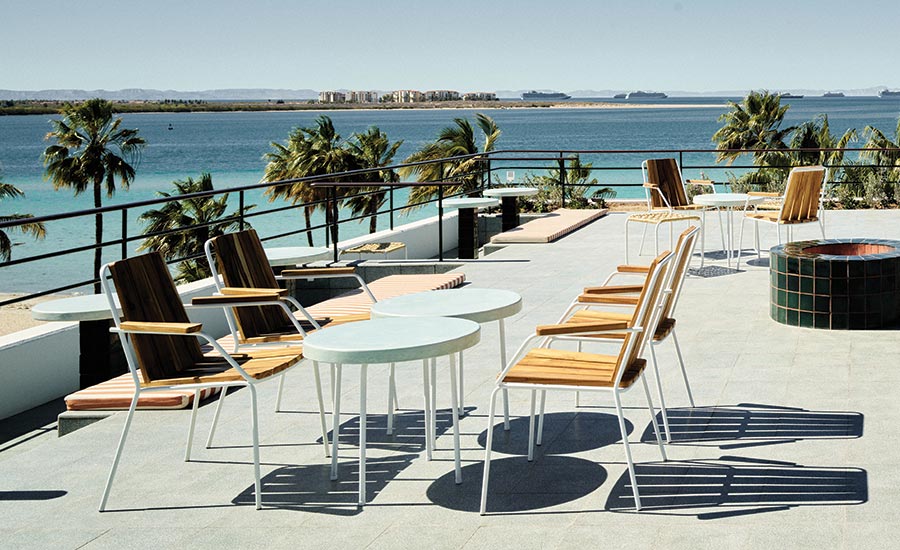 To help write this story, Couturier turned to Max von Werz Architects, of Mexico City, and JAUNE, interior designers based in Paris. “My brief to Max,” he explains, “was to respect the urbanity of La Paz; to create a minimalist building connected to the sea, like an intimate cruise ship docked on the promenade; to give a terrace to every room; and to integrate elegantly with the historic house.” He asked JAUNE to evoke sybaritic outdoor living with understated luxury. “The Sea of Cortez was the favorite sea of Jacques Cousteau,” says Couturier. “We asked them to deliver a hotel where Mr. Cousteau might have dined and slept after a long day on his boat, the Calypso.” 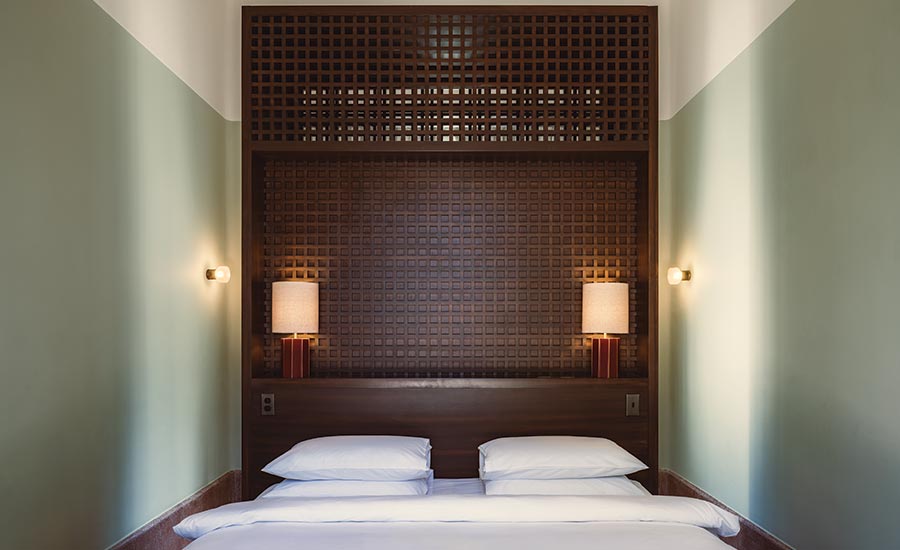 With just 4,900 square feet, the single-story historic house could absorb only a fraction of the hotel’s program: reception, lounge, restaurant, bar, kitchen, meeting space, and five guest rooms. A 34,100-square-foot addition of four floors and a basement accommodates 27 more lodgings and a spa. “Before we commenced construction, the zoning changed to permit more height,” recalls von Werz. “We briefly studied the possibility of adding a level but abandoned the idea, as the building started to feel out of sync with the urban context and the domestic scale of the villa.” 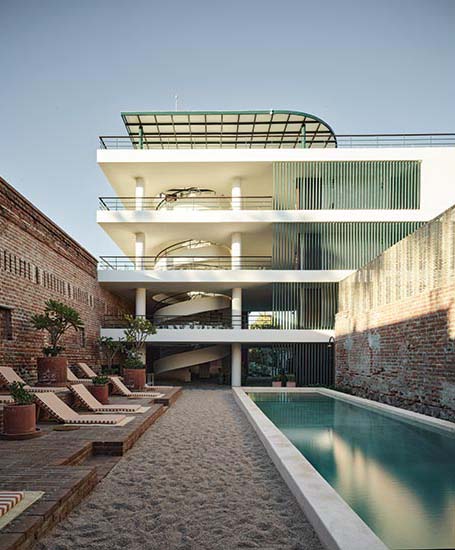 A circular stair leads to a pool within old walls. Photo © Fernando Marroquín

The site has an irregular, polygonal shape. An old redbrick wall encloses the sides and rear, formerly occupied by sheds and workshops. At the front, the historic house borders the promenade, its L shape anchoring the lot near its northwest corner. Von Werz’s scheme for the addition was simple and direct: a second L-shaped building at the southeast corner, whose oblique angle he finessed with a circular stair. “The two volumes complement each other,” says the architect. “Together they form a coherent whole, a perimeter construction that loosely frames a central courtyard.” Other outdoor spaces include a pool court and gardens along the property’s edges, and Grupo Habita’s signature rooftop bar (as seen in RECORD, December 2011, June 2013, and February 2017). 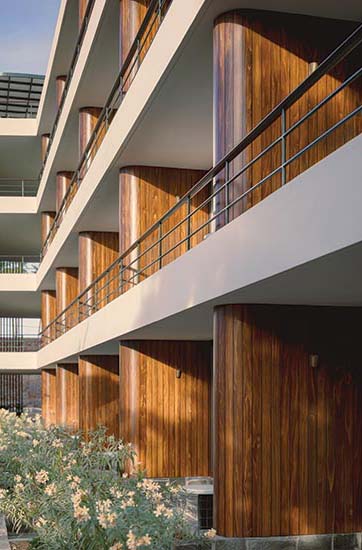 The addition rises as a stack of four boomerang-shaped tiers made of reinforced concrete. At the ends, the tiers cantilever and step back to reduce mass and provide generous terraces. “They evoke nautical images of a cruise ship’s deck,” says von Werz, recalling his client’s request. The spaces between slabs are punctuated at 18-foot intervals by walls clad in acetylated wood that frame large planes of glass, enclosing guest rooms set back behind private balconies. The contrast between this bold modernist composition and the classically articulated villa is striking. But the two buildings coexist harmoniously because both are finished in white-painted stucco and share a horizontal rhythm. One floor of the new building aligns approximately with the cornice of the old, establishing a subtle continuity along the street. 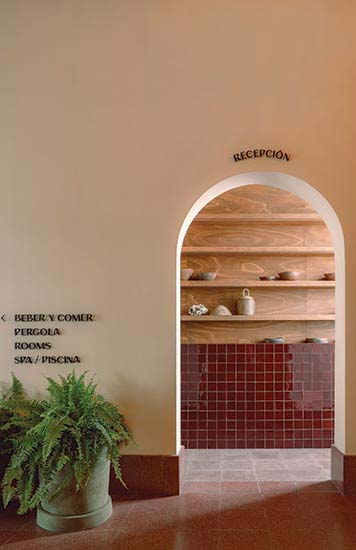 Artisanal tiles were used on the walls and floors. Photo © César Bejar

Materials throughout draw on the original detailing of the house, including artisanal terrazzo and Talavera tiles, hand-finished wood lattice and millwork, and blown-glass lamps in both clear and amber tones. “The atmosphere of the existing building was so strong that it became the common thread for the whole project,” says Paula Alvarez de Toledo of JAUNE. Almost everything except bathroom fixtures and fittings—and door handles designed by von Werz’s former employer David Chipperfield—was fabricated in Mexico, much of it nearby. “Grupo Habita steers away from importing products and consistently wagers on the local,” says von Werz. 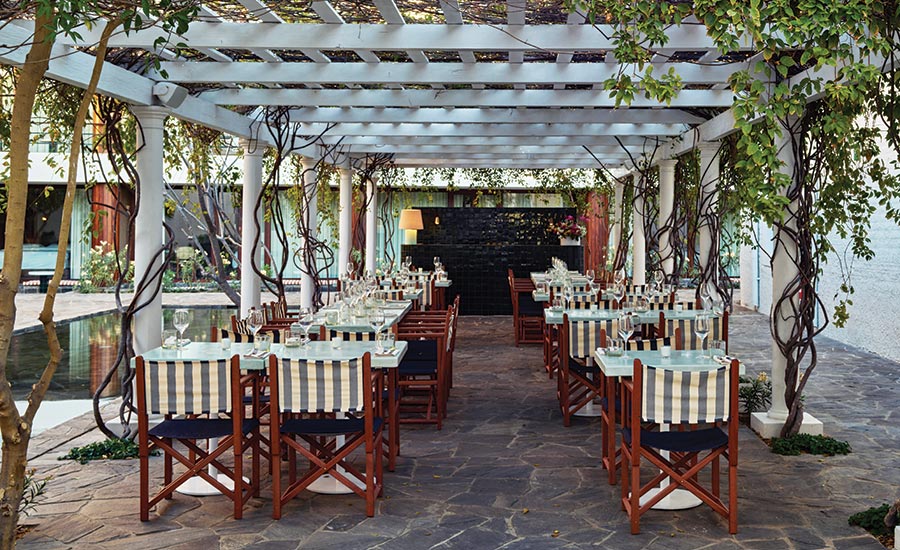 “La Paz has mainly two types of visitors,” says Couturier. “High-end travelers arriving in private jets and heading straight to their yachts, or independent travelers who love nature, hiking, pristine beaches, or kitesurfing. We see our hotel as a social hub where these two groups connect.” With its sophisticated layering of new and old in a setting that juxtaposes natural splendor with urban vitality, Baja Club seems certain to attract both sets of clientele. Too bad Jacques Cousteau can’t join them. 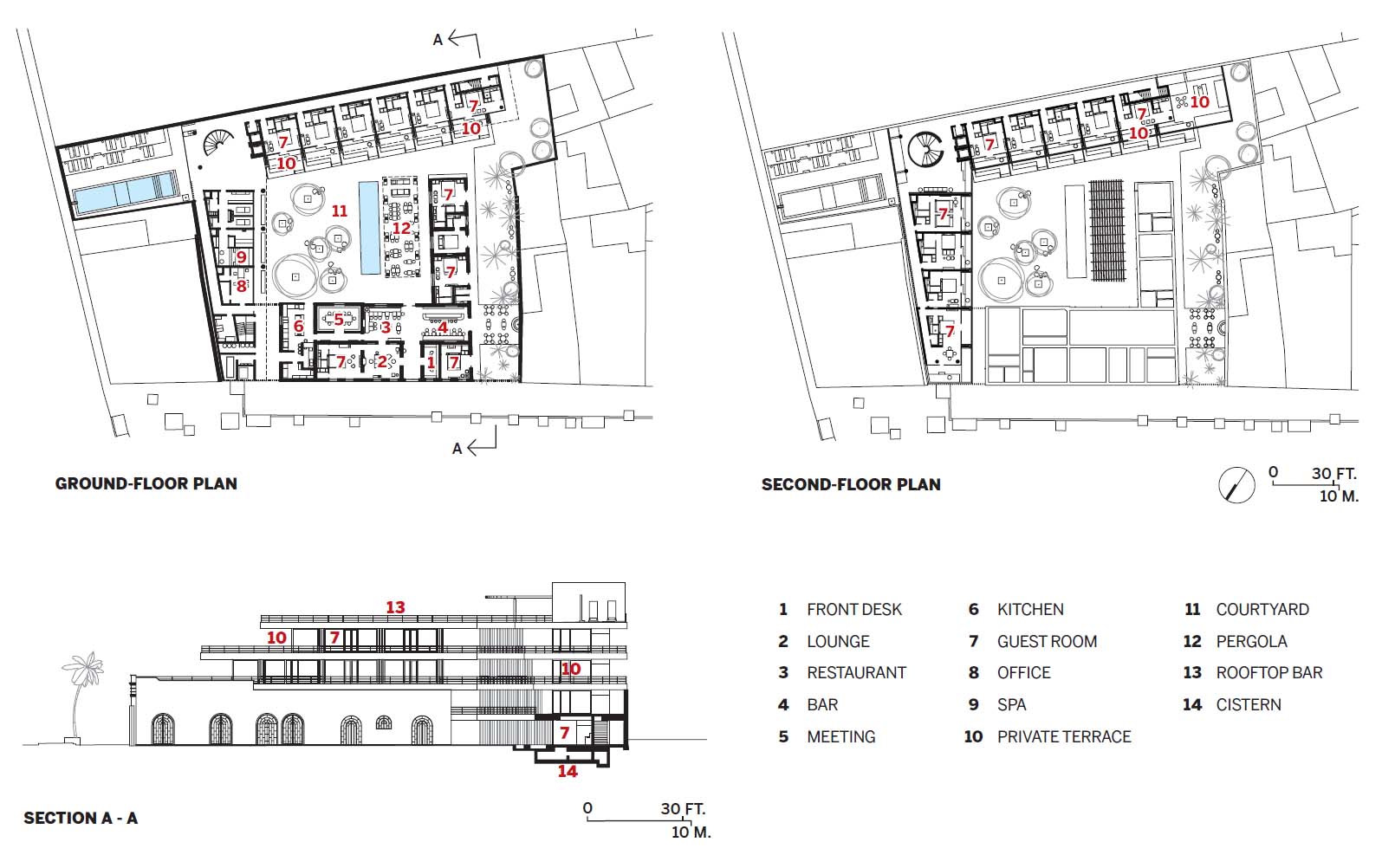